What do these dashed/dotted lines mean in this power cord schematic, and how should I ground this device?

I'm making a power cable for a piece of obscure, surplus military equipment (an AN/UGC-74B teletype, to be precise). I have the manuals that describe the power cable, but the wording doesn't account for part of the schematic, and I can't find a definitive answer that seems to make sense searching online. I'm somewhat familiar with electrical terminology and symbols though not an engineer by any means-- just a hobbyist who still doesn't know much compared to most of the people who will read this. I haven't seen anything like this before. If it's something simple, I apologize. 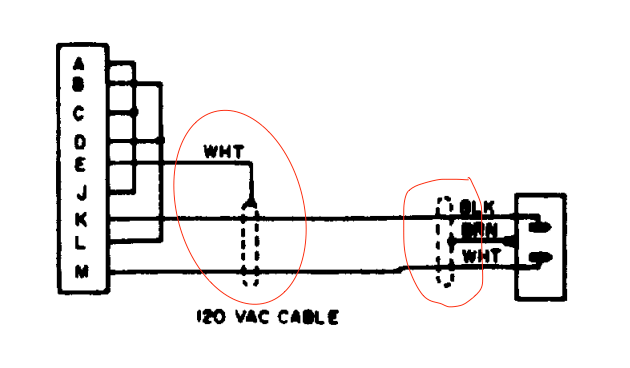 On the right side of the schematic we see the standard three-pronged 120-volt male adapter. BLK and WHT wires connect to pins K and M on the 12-pin Amphenol adapter (not all pins are used) on the other end of the cord, but BRN (or ground) stops at the dashed line that appears to make a circle around the other wires. Then, on the other end of the cord, we see another dashed circle, this time with another wire, also labeled WHT, seemingly coming off it to pin E.

Another schematic of the power input on the device itself shows that pin E appears to have no input from the cable but connects to chassis ground via something called E2-- see here: 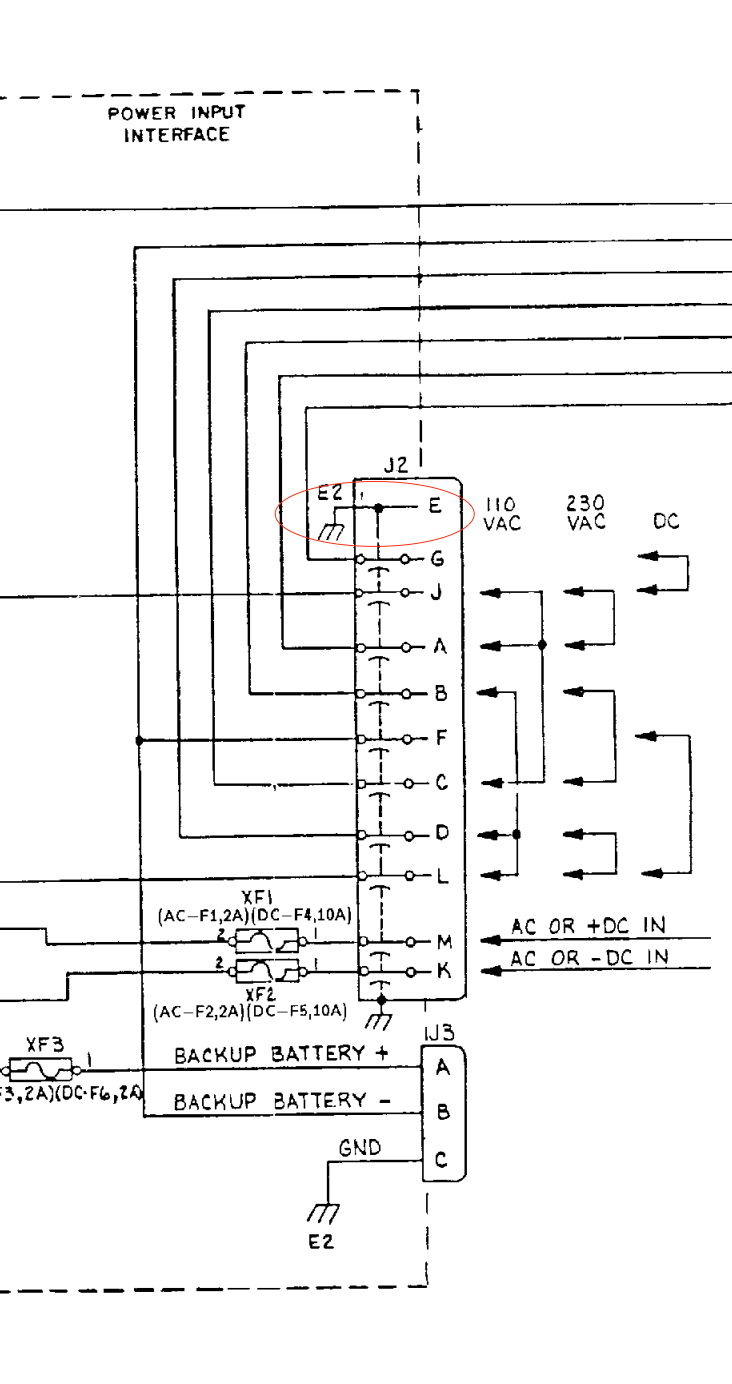 Also note that there is not only this power input connector (labeled J2 in the schematics) to which my cable will connect, but there is also a ground terminal, and I'm not sure if I should bring the ground wire out of my cable and connect ground there or not, either. If the device isn't grounded via pin E through the power cord's ground wire, I'd assume that I'd need to ground via the GND terminal for safe operation instead.

This is an image of the power input and ground terminal to show you what I mean (additional photos of various parts of the teletype available here-- not my photos but the same model of TTY: http://imgur.com/gallery/FK5nB): 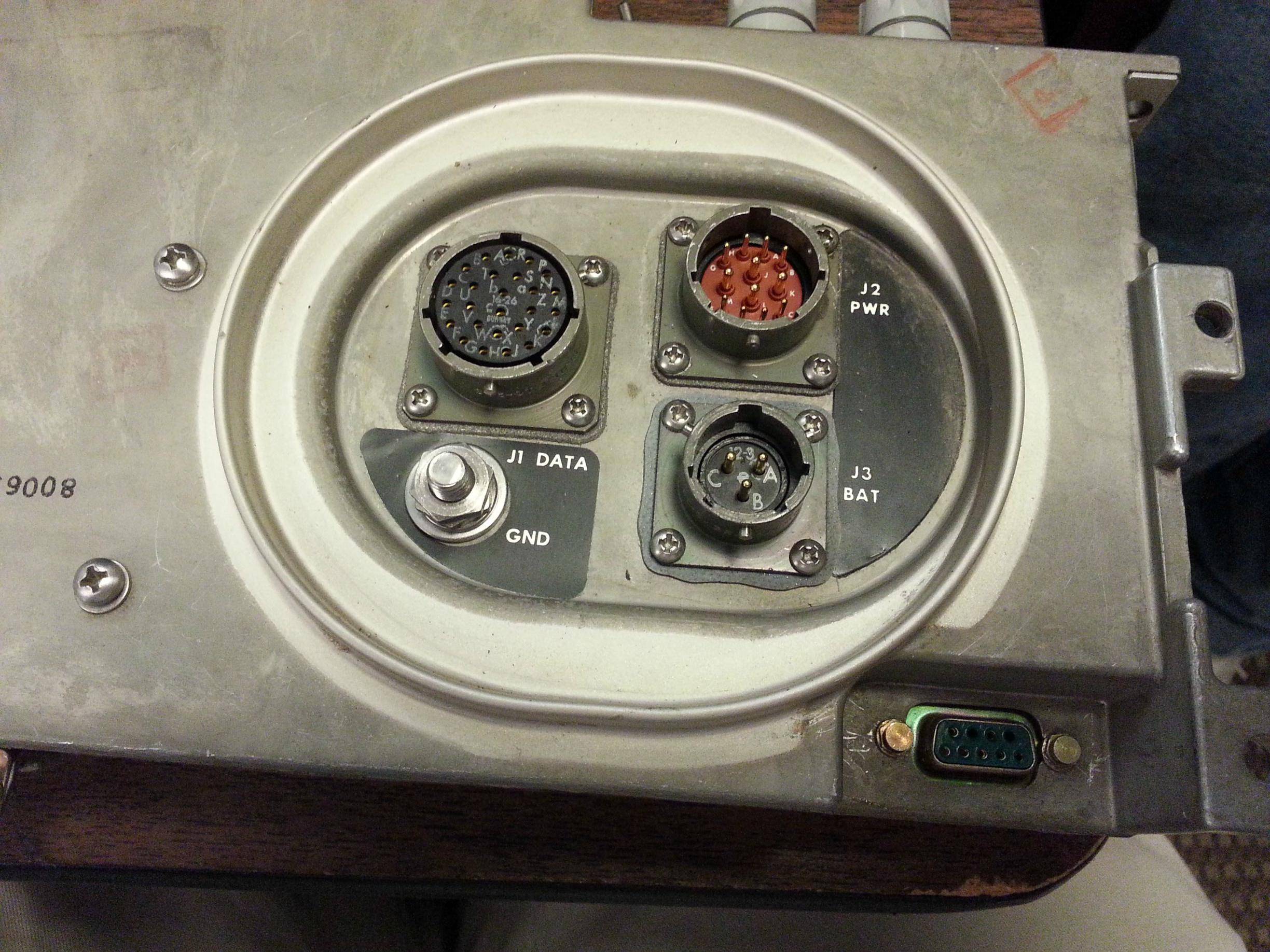 At this point, I just am not sure what to do about this. I want to make sure I create the cable properly so I don't break anything; I understand everything else about how to make the cord, but not what to do with ground and pin E.

The full schematics I referenced are on pages 143 (labeled 3-93 in the manual) and 396 (labeled FO-3), as well as additional information describing the power input wiring on page 96 (labeled 3-46).

The Specific Questions I Have

I see several details in your drawings.

1) The top drawing is of a shielded power cable, and the power can be AC or DC.

3) J2 also shows built-in capacitors to filter out EMI noise from either direction. I would use pin 'E' as power ground even if you just run a green wire to your power source ground.

4) The dashed lines around J2 refer to the chassis in an abstract way, and show it is grounded to J2 and J3 connector shells directly.

5) There maybe other drawings that tie into these drawings, but for power source and ground these seem to cover the issues.

6) The power cable does not have to be shielded for non-military use. Make sure J2 is wired correctly for the voltage you are using, AC or DC.

The dotted lines that circle the bundle of signals is often used to delineate a cable bundle (e.g. wrapped together in a sleeve), and when signals are connected to it, that generally means that it represents the (conductive) cable shield.

The second thing you circled (in J2), is a typical representation of Earth ground. I take it to mean that the chassis is bonded to Earth ground.

I would agree, this appears to be a conductive shield around the the 2 leads in the power cable, the clue here is the military spec on this device, this is done generally to try and prevent Emf interference on the operating device

The dashed oval outline designates a conductive overall shield. Typically a braid of small, bare copper (or tinned copper) wires. However ordinary power cables just have the safety ground as a third, insulated internal wire just like hot and neutral.

Note that back in vintage days (as when those diagrams were drawn) the color standard in North America was white for neutral, black for hot, and green (or some other color) for safety ground (if there even was one).

Today the European Community standard along with the international marketplace have de-facto standardized on power cords with light blue for neutral, brown for hot, and green with a yellow stripe as safety ground.

For something like an antique teletype, I can't see that you actually NEED a SHIELDED power cord. An ordinary cord capable of the voltage and current rating would be completely sufficient.

Not the answer you're looking for? Browse other questions tagged power ground schematics input or ask your own question.

1
Common ground: Computer A and USB powered Arduino (MCU) from Computer B
1
How should I wire up ground when using an ATX power supply to power an Arduino and several LED strips which in return are controlled by the Arduino?
0
AC adaptor camera make LED flickering
0
Which terminal do I hook the panel ground wire to on my VFD?
0
Earth Grounding an HV Power Supply
1
Several Questions About Analog Input
1
How to properly label power wires