I am using Labview to simulate a communication channel using FM modulation/demodulation (with MT Modulate FM VI and MT Demodulate FM VI to be more precise). 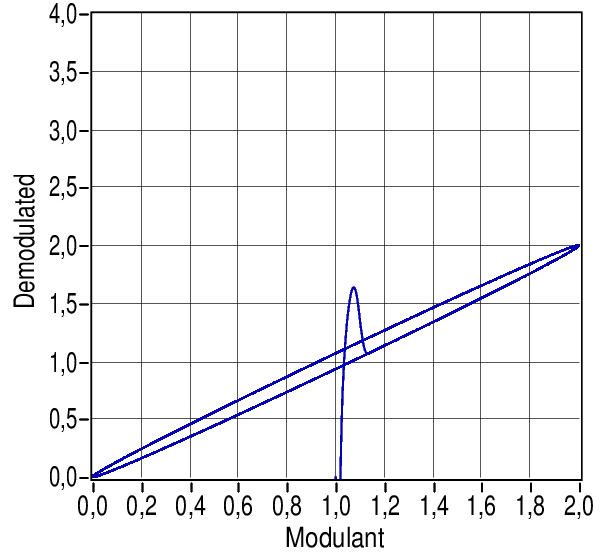 The ellipse is, as has been mentioned in the comments, due to a phase change between the modulant and demodulated signal. In fact it's a Lissajous, and with practise you can use it to tell the phase difference. The graph doesn't show which way round the ellipse the curve is traced, but I would bet it's anticlockwise. In that case, the demodulated signal is slightly lagging the modulant. You can understand this by realising that a phase lag is exactly the same thing as a time delay. I don't use LabVIEW unless I must, and I'm not familiar with those VIs, but pretty much any design of FM demodulator introduces a time delay, probably a small multiple of the carrier period.

With that in mind, we can work out why the ellipse gets larger as you increase the modulation frequency. The time delay stays the same, but the modulation period shortens, so the phase change gets larger. With a Lissajous, the ellipse will open out to a circle when the phase lag is 90 degrees, then close back into a line the other way when it is 180 degrees (though the demodulator will attenuate the signal a lot when the phase shift gets large so you probably won't see it).

That just leaves the line that comes up from the bottom to join the ellipse. If you had built a real FM modulator/demodulator and used a decent scope to plot that graph, that branch would be much fainter than the others. That's what happened when you turned it on, and it tells us more about the demodulator response. The small time delay mentioned above is how the demodulator behaves when locked to a slow-changing modulation, and that overshoot is how it reacts to a step change.

Not the answer you're looking for? Browse other questions tagged communication modulation fm demodulation or ask your own question.

4
Modulation And Other Communication Terms
9
Information content of amplitude modulation versus single-sideband transmission
3
Amplitude Modulation Concepts
2
Definition of \$\mu\$
1
AM Demodulation of Square wave
1
How can picked up FM noise be demodulated?
0
Spectrum of FM signal?
0
How do you find the phase lag of the current in this FM demodulation “discriminator” circuit?
0
QAM modulation and link to AM, ASK, PAM