Can you saturate a transistor with a foreign voltage?

Is it possible to saturate a transistor by applying a voltage on the base that is comming from a different source than the source of the voltages of the collector and the emmiter? 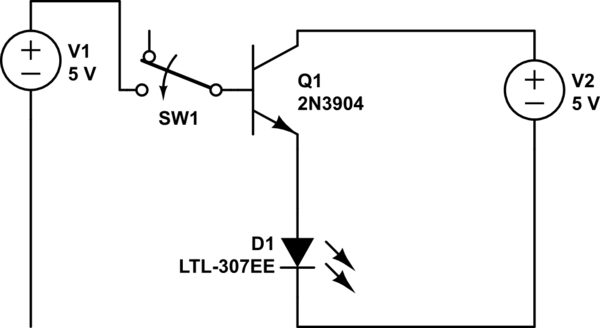 I wanted to start a desktop computer with an arduino that is powered by an adaptor. I solved this problem by connecting the 2 ground pins with each other.

Voltages don't "come from" someplace, they exist between two nodes. The notion of a "foreign" voltage is non-sensical. In the context of electronics, you can't talk about a voltage in absolute terms, unless it is implied what other node the voltage is relative to. If the circuit has a node labeled ground, then it is understood that voltages talked about as being absolute are really relative to ground. That's actually the main purpose of labeling a node as ground in a schematic.

Your circuit doesn't show any node as being the implied ground. However, from context and the way the schematic is drawn, we would usually assume that the implied 0 V reference is the negative lead of the power supply and the cathode of the LED. Forcing people to make assumptions like this is a bad engineering, so ground should really be clearly marked if you're going to talk about voltages on single nodes without explicitly mentioning the reference node.

The transistor only reacts to voltages between its pins. To turn on a transistor, you have to put enough voltage on B with respect to E so that sufficient base current flows. Since B-E looks like a diode to the outside circuit, it is usually better to specify the B-E current instead of the B-E voltage. The voltage will usually be 600-750 mV over the useful operating range, but the current will vary much more widely over that range.

As Olin mentions, the only thing completing the circuit is capacitive coupling, which is a very high impedance ,specially at low frequencies.

However there's one case where it might matter, that is well worth mentioning. And that is where a huge DC voltage between the two independent circuits. Carry V1 across a nylon carpet (or rub it on a cat) and it may be at a potential 50,000 volts away from Q1's base.

Now the actual voltage of V1 itself doesn't matter, but the 50,000V difference connected to Q1 base, with the circuit completed by a few picofarads of capacitance, can be enough to ...

but destroy Q1. (Especially -50,000V which could reverse bias the base and break the base-emitter junction).

A bipolar transistor like a 2N3904 is fairly tough and may survive this treatment : a MOSFET or an expensive microcontroller may not.

So use electrostatic safe working techniques when assembling and testing circuits!

Not the answer you're looking for? Browse other questions tagged voltage transistors or ask your own question.