This is my first question on here. I am good at programming but am a little stuck when it comes to electronics and connecting two circuits together. I would like to interface a spa controller with 3 basic elements - increase temperature button, decrease temperature button and “currently heating” LED. The MCU I am using runs on 3.3V and the physical controller runs on low voltage (12v I think).

I can access the back of the PCB on the physical controller and can see the 2 push buttons pads behind each button. I also have access to the + - controlling the red LED. The voltage reading is 0.45v when the LED is turned on and -0.29v when the LED is turned off. Logically to me there is a voltage change detected on my multimeter so there must be a way to interface this to an input of 1 or 0 on the micro. Also not sure if it helps but I got a reading of 135mA across the two pads while the LED was off.

I have researched other questions here and on the net and am having trouble finding anything to do with interfacing with external circuits. I have found some information on 4N35 optoisolators and also reed relays.

To make any sense of these readings we would need to know where in the circuit they were measured. In any case you need to find the circuit common or GND - usually DC negative and take all readings referenced to there. (Multimeter black COM lead on circuit GND for all readings.)

A better way to avoid any risk of damage with the original system is to isolate the control (buttons) and feedback (LED) between the spa controller and your micro. 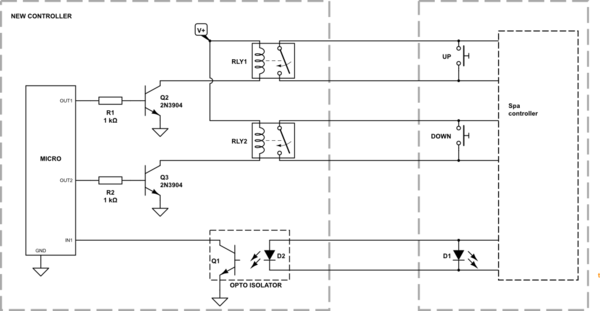 This scheme gives full electrical isolation between the two systems and saves trying to figure out how the original buttons and LED are monitored and controlled.

If you put the six interface wires on a plug connector you can restore original operation at any time by pulling the plug.

This isn't possible with my simple interface. Solving this aspect requires much more analysis of the original circuit.

The big flaw in the design is keeping the two systems in synch. On power up certain conditions would have to be assumed and problems with contact bounce, etc., would make keeping track very uncertain. It all sounds mildly dangerous as someone jumping in without checking the temperature could suffer severe scalding. 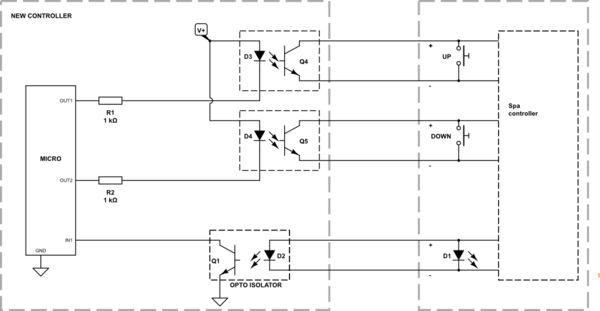 To test whether the optos will work instead of relays make up a test connection as shown in Figure 3.

There are lot of things which needs to be answered here. Firstly,the thing about the detecting changes in the LED voltage and the pressing of the switches, all of them can be monitored by the MCU(Microcontroller). You need to refer to the schematic or can directly verify from the PCB whether the LEDs used are pulled up or pulled down. I say so, assuming that you are using a development board. Accordingly, you can set the pins of the microcontroller as Input Ports and then code according to your need.

Secondly, the pressing of the buttons can be dealt in a similar way. Again, you need to check the connection of the button in the schematic. On pressing the button, check the voltage across the switch. You can then determine whether the switch is pulled up or pulled down. Accordingly, you can code the microcontroller (by setting the pins as input) and store the value as per your needs.

Not the answer you're looking for? Browse other questions tagged microcontroller relay interface or ask your own question.