CMOS on breadboard - Which P & N type MOSFETs to get started?

I would like to implement my own CMOS logic on a breadboard.

I have already designed a simple PCB with basic logical functionality but now I'm stuck on the choice of N & P Type transistors (MOSFET, not BJT).

I need the PMOS & NMOS to have the same K (1/2 * µ * Cox * (W/L)) in order to be more comfortable while calculating propagation times & other stuff. Or at least very similar.

I'm completely lost. Lot of theory but when it comes to real life I don't know which component may fit my needs.

it may be helpful to tell you that I know:

You can play around with making gates from transistors using the CD4007 chip. It contains two complimentary pairs plus an inverter. 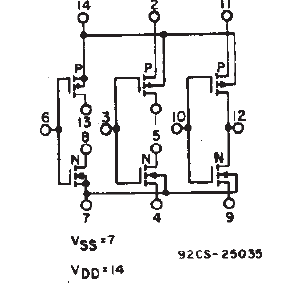 Some possible gates with one package: 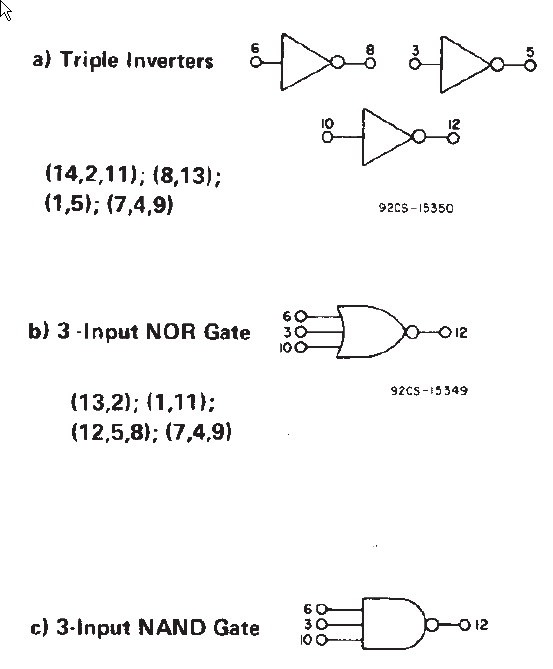 The other thing that might be useful is a CD4016 quad transmission gate. With those two you could make just about anything, in theory.

In practice, it would be very tedious to make even a 4-bit ALU using such low levels of integration.

These days, most folks who are interested in making complex logic get into using FPGAs, which provide astronomical numbers of potential gates in a single package. There is a significant learning curve to use such parts.

Not the answer you're looking for? Browse other questions tagged mosfet cmos breadboard or ask your own question.

4
Breadboard type of connector
2
Better way to drive higher voltages
2
Why can't CMOS simply be made of n-type enhancement mode MOSFETs and n-type depletion mode MOSFETs?
1
MOSFETS +/- Voltages? Which to use?
1
Which CMOS SPICE model should I choose?
2
Breadboard type for valve circuits?
0
Which type of MOSFET
0
Can I create a CMOS AND gate with 2 serial n-type and 2 paralel p-type CMOS transistors?
1
How is the propagation delay of a logic gate affected by the amount of inputs (fan in)?
1
Logical Effort Inverter Sizing