What will the output of filp-flop if its input is metastable?

I was reading sunburst paper on Clock Domain Crossing and got stuck with this doubt. 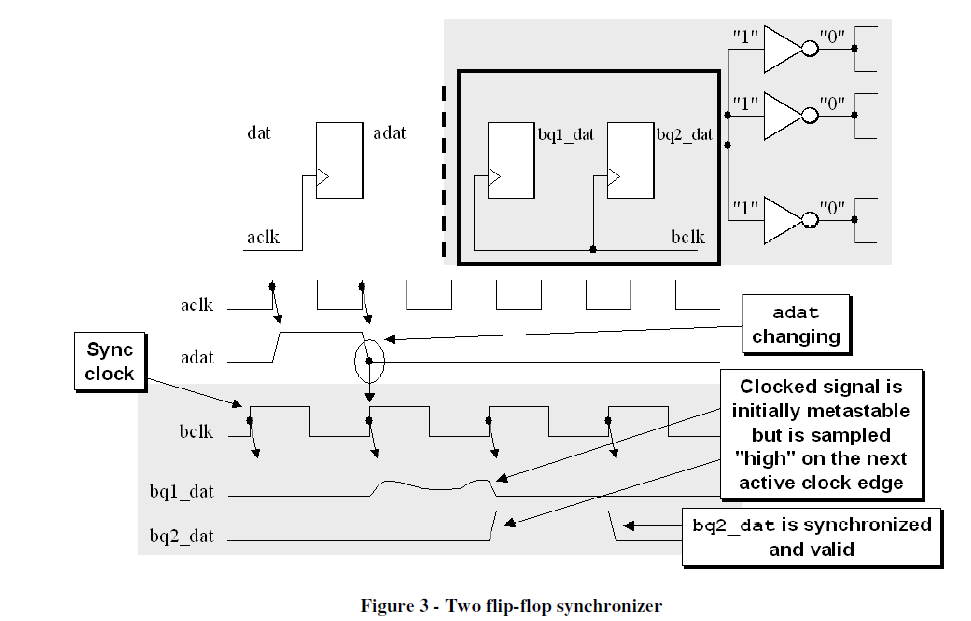 Here in the 3rd flip flop, input is metastable state but at the rising edge of the clock output was set to high. In box they mentioned "clocked signal is initially metastable but sampled high on the next active clock edge" but no were in the document they are mentioning its reason. Please help me with this problem.

In the paper it is explained that metastability is inevitable in a system with asynchronous signals:

The picture you have uploaded shows the simplest solution, which is to use a flip-flop as a single "time delay" unit between the systems with different clock signals, to recreate a synchronized signal. As described here:

metastability may not always result in unpredictable output. If provided sufficient time with proper excitation, the f/f can in fact settle to a stable state

What happens in your picture is that the arriving signal is initially metastable. This generally means the signal is oscillating around a voltage that neither can be interpreted as 0 or 1. If it were used directly in e.g. a combinational logic, results would be inconsistent between parallel systems that use the data.

The time delay caused by the buffered flip-flops give it enough time to resolve its state to a valid voltage level, as metastability is very sensitive to thermal noises and other interferences (just like the example of a ball that is about to roll down a hill). It is only a passing state, never a final one.

5
If a flip flop has a setup violation and goes metastable, is it guaranteed to settle to the input value when it finishes oscillating?