How do I make the turn off and turn on time equal in a NPN transistor?

I have a simple NPN switch, see the diagram.

I feed a 100KHz square wave (TTL) to the base of this transistor and it turns on very very fast (a few nSec) but it doesn't turn off as fast, it almost takes 2uSec for it to turn off. (I am looking at the collector of this circuit). The diode is a laser, transistor is run off the mill NPN (datasheet). I also tried with another NPN from ONSemi which is faster (at least what I think) same story.

Why the transistor doesn't turn off as fast?

How can I make it turn off in a few nSec?

Is it better to use a MOSFET than NPN in this case? 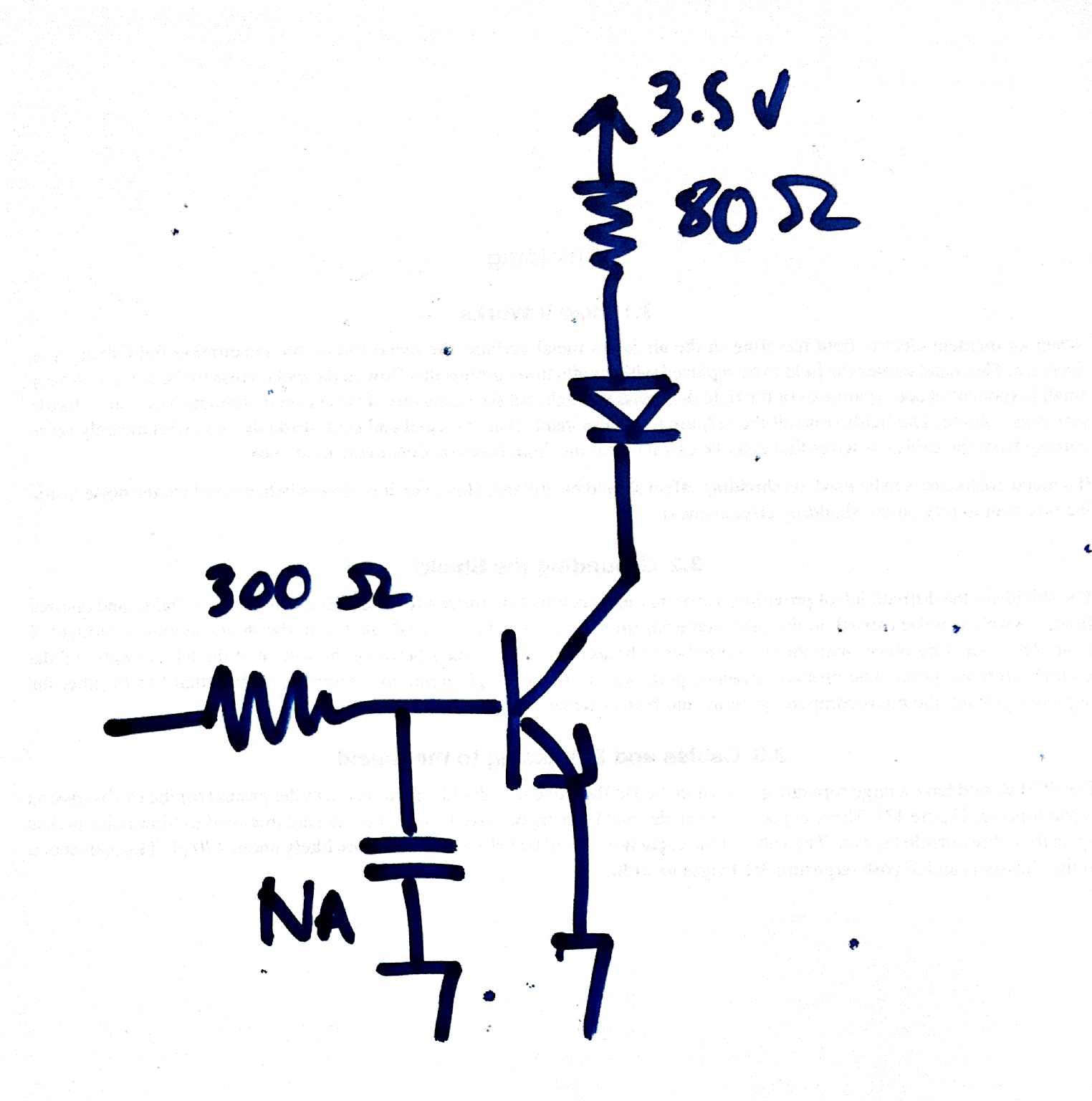 I have added a 1K instead of that NA capacitor pad and use a faster BJT, things improved a bit. (Actually, I found that the BJT is similar speed but lower collector output capacitance, 2pF vs. 6pF). Anyway, now I see turn off about 120nSec. I will add a speed up cap and report results from here.

A faster BJT will probably help once you get the fundamentals sorted out.

There are two (probably) new miracle working friends that you should meet. 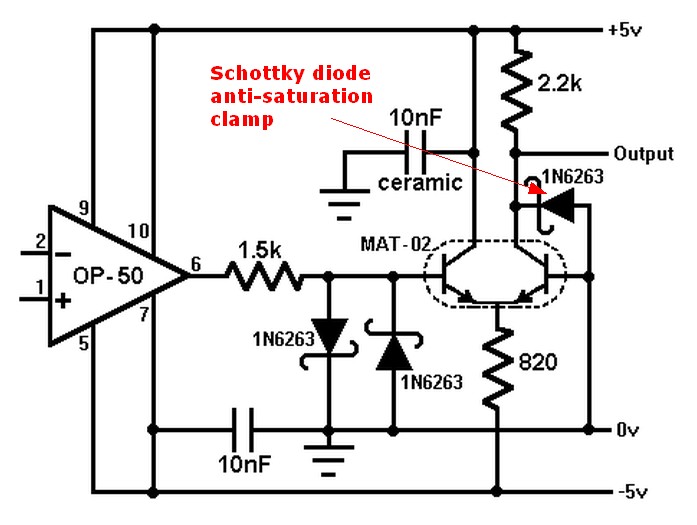 Look at the internal block diagrams for Schottky TTL. Note how this compares. This is primarily what allows Shottky TTL to be faster than standard TTL. 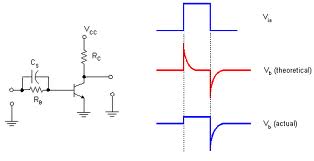 Warning !!!!!!!!!!!!
Looking in here whence the below diagram came from, is liable to result in you and your soldering iron and/or breadboard staying awake all night :-).
Many good ideas.
Can you do a Miller killer ? :-). 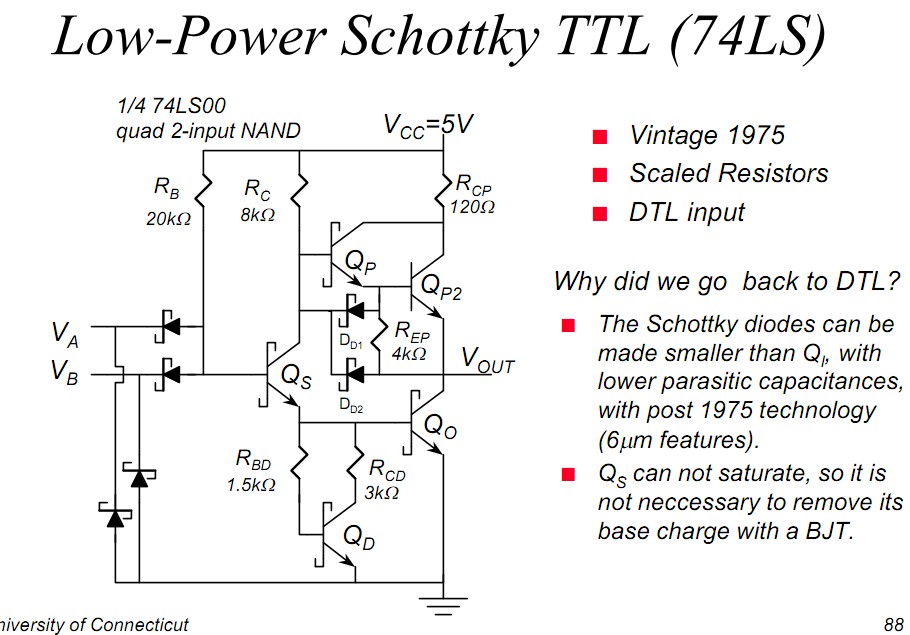 I.e. with the same base current the transistor could admit more current going through the collector.

If this is the case, the turn off time of the transistor will be relative long (if I remeber right, the reason is because then charges in the base region will be swept out mainly by diffusion which is a rather slow physical process).

You can change this situation easily by following circuit: 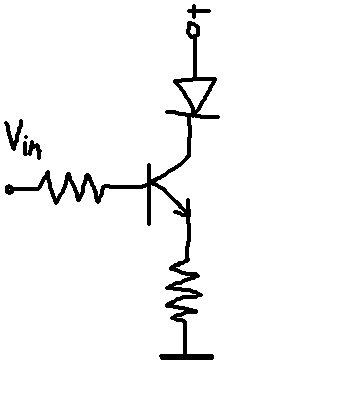 There is also another advantage of this circuit:
This circuit will be more stable when the transitor heats up and becomes more conductive (semiconductors become MORE conductive when heated). The current wont change much (in your first circuit it will).

Be aware that the current now doesn't depend on the supply voltage, but on the control volatge (Vin).

Let be
Rb resistor at base (may be a small value; even 0 Ohms)
Re resistor at emitter
Vbe base-emitter-voltage (ca. 0.7 V for Si transistors)
b current amplification (ca. 50..100)
Ie = b*Ib emitter current; almost equalt to Ic = Ie - Ib

I did some real world measurements of both circuit variants: 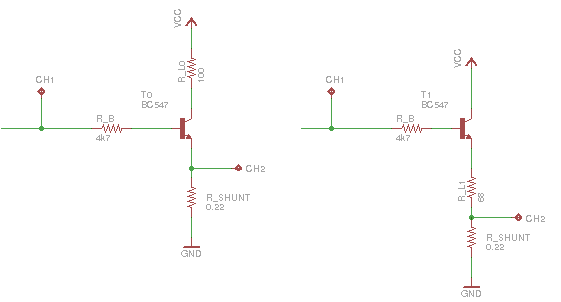 But now look how long it takes to turn off the current in (A):
ca. 1.5µs between the edge of CH1 (base voltage; blue) and CH2 (emitter current; green): 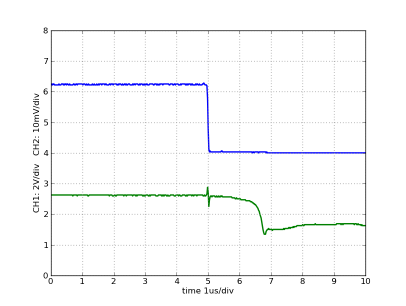 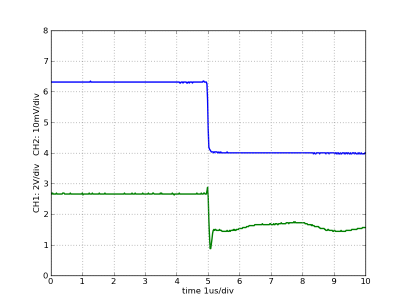 The problem here is the asymetric nature of a BJT's switching.

If the switching threshold is less than half way between the minimum and maximum base voltage then the transistor will take less time to switch on than switch off. If it is over half way it will switch off faster than it switches off.

For example, take a look at this over simplified graph I have scribbled out: 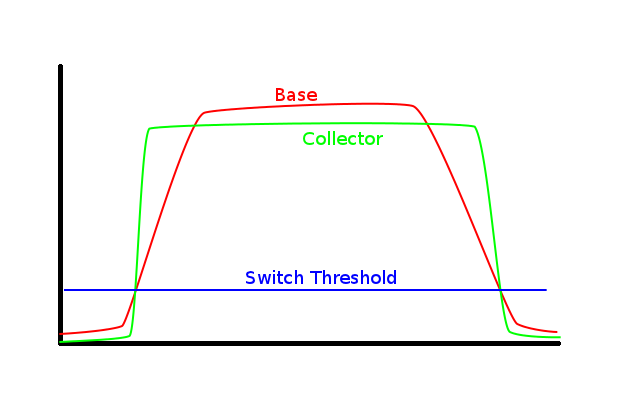 By adding a resistor between the base and ground you create a voltage divider. This reduces the range of the base voltage to bring the base voltages closer to symmetry around the switching threshold.

When running as an amplifier, you aim to fit the base voltages into the switching zone, so that the transistor is never either fully on or fully off, but is being manipulated around that tight switching zone.

Disclaimer: Yes, I know this is overly simplistic, but it gets the basic principle across without bogging the OP down with mathematics and formulæ.

I have a similar circuit, a high resistor placed between the emmitter and detector causes it to leak off and break the circuit, your resistor size is pretty critical

The transistor won't turn off as fast due to the base emitter junction being saturated.

I have seen this before and simply place a nmos-fet in place of the transistor. Source to GND Gate to control signal (100ohms would be more than large enough in series) Drain to LED.

1
Is it meaningful to describe an IGBT as desaturating?
7
Control 5 V load with transistor 3.3 V - Raspberry Pi
0
Improve switching speed for a <50mW laser with an Arduino and Transistor
1
How to connect/disconnect signal line electronically?
2
NPN transistor as switch (actual voltage readings)
0
Bipolar transistor as a switch. Cut off mode?
0
What if I switch the place of the load in a common emitter NPN transistor circuit?
0
Why does this BJT work as a switch in this logical-NOT circuit, no matter how I orient the emitter and collector?