While evaluating the Libelium Waspmote board for wireless sensor networks, we discovered a strange communication problem.

We tried to set up a link between the waspmote and another board via UART at 115200 Baud using 8N1. 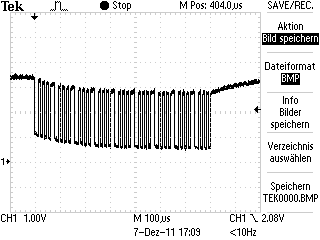 The levels of high and low degnerate to the treshhold of detection: starting out with a High level of 3.3V, the peaks drop in to about 2.7V and the lows start out at about 1.1V and drop to 0.7V.

According to the target boards specification, the peaks should be > 2.3V and the lows < 1 V for correct operation.

It looks to me as if some capacitve behaviour emerges, but I have no clue why this happens.

I am in need of a clue on what is happening, what i am doing wrong, or what i can do to fix this problem.

I made a detail shot of the signal. We are looking at a transmission at about 125kHz - which seems to be a bit far off the desired 115200 baud I'm aiming at. 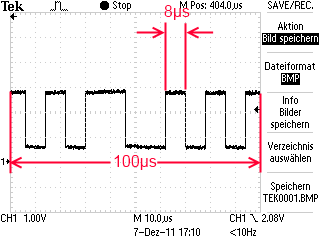 I measure identical waveforms when I disconnect the traget board and put the oscilloscopes probe directly at the microcontrollers UART-Pin. This seems to rule out problems with the target board. However, the measured baudrate is exactly 125000, which is an error ofabout 8% from the desired target baudrate of 115200. Since the UARTs specification limits the baudrate skew to 2%, I guess there's my problem. However, since the waspmote board is locked to 8Mhz clock rate, the Atmega1281 on the board can not produce a more acurate 115200 baud clock through the prescaler registers ( I checked the manual). I guess I'll need another board to communicate with my target board.

Your problem is likely in using the wrong baudrate: 112500 is most likely a mistake, the standard rate in that range is 115200 (a search of the manufacturer's website for this number finds many hits, but none for 112500). You could also not be producing the programmed baud rate on one end or the other due to divider granularity; sometimes changing the oversampling of the UART can help. EDIT: Specifically, a value of 8 (divisor of 9) will get you 111111 baud from 8MHz if you set the "double speed" mode bit.

Secondarily, you have a problem such as lack of a common ground between the boards, or haven't grounded the scope to them, thus resulting in the distorted waveform. It's not clear yet if that is what the receiver sees, or if it's merely a measurement mistake in applying the scope.

Additionally, have you verified that the un-named external board also runs without a serial level translator? Most modular inter-board serial communications is at RS232 levels and logically inverted from the logic-level signals, though there are exceptions.

The WaspMote technical guide advises that it has 4 UARTS -
any one of which may be selected by a supplied multiplexer.

Indeed, if you want to see the UART which you are using it MUST be selected by the multiplexer :-) !!!

If you were not correctly selecting the UART it may be capacitively coupling informally. Have you selected the multiplexer correctly?

Once you are sure of what the DC connection path should be you can check it.

Decide if there is a point in the TX cct as close to the signal origination point that may be grounded or pulled down with a small value resistor. Also maybe pulled to supply. If so, do so and see if the DC level remains and does not just cause a capacitively coupled excursion.

Is a driver unpowered so that the signal excursion powers it but the supply then starts to decay under load.

Not the answer you're looking for? Browse other questions tagged avr serial uart or ask your own question.

3
STM32 UART reliability with high baud rate
1
uart TTL problem
0
Interfacing three UART devices to Microcontroller without loss of data
0
Upon setting up serial UART between two boards I can only monitor send or receive, not both, Why?
0
Garbage data when using UART on atmega2560
0
Connecting to UART port on smart BMS