Why (not) put a resistor on FET gate?

While thinking of ways to protect a MOSFET one idea was to put an extremely high resistance in front of the gate: The idea being that current is never supposed to flow through the gate, so if some transient threatened the gate, the resistance would limit that current, possibly preventing the FET from burning out.

In fact, while researching MOSFET protection I came across this integrally protected product that includes in its features "internal series gate resistance," as shown on its diagram: 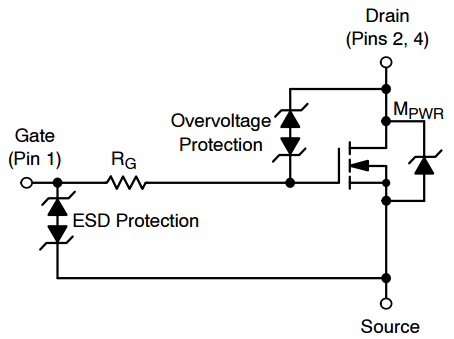 If this idea is correct, then the question is: Why not always put a megaohm resistor before the gate of any FET?

Or is there a practical reason that a gate resistor would not typically protect the FET? Or could it even have any adverse performance effects?

The gate source is essentially a capacitor. So with this high resistor, it would take a very long time to charge. The MOSFET will only turn on when the gate capacitor is charged above some level (the threshold voltage), so you will have very slow switching.

The reason gate drivers are often used is because they are able to quickly charge the gate capacitor (often using current above 1A) so switching times can be minimized.

You can read more here.

Big resistors on the gate slow down the switching of the MOSFET. This is OK when you are using the MOSFET as a switch (ON-OFF) but when you're driving a motor at a 20kHZ frequency and above, switching should be fast to minimize the heat losses (switching faster means less power lost). Note that the resistor you see at the gate is not intended to only protect the MOSFET... it also protects whatever's driving the MOSFET (for example: a microcontroller). Excessive current may rush and damage the I/O pin.

As Darko said, the MOSFET is a capacitor when you look at it from the gate side. The charge needed for this capacitor to fully charge is called the gate charge (you can find it in the datasheet). Once charged, the MOSFET's resistance (RDS) decreases to its minimum. So you can understand that trying to drive this pin without a series resistance means high current will be sunk/sourced by the driver (same as inrush current when charging a capacitor).

Edit: Re-interpreting the value shown on the datasheet. The resistance shown is not M\$\Omega\$, much lower, more like 3400 ohms based on the change in the switching times with external gate resistor.

This does in fact really slow the switching when the gate charge is high, such as the 1.6ms minimum off switching time with a 15V 1.5A load. The asymmetric switching time implies they may actually have a diode across the resistor to speed the 'on' time. The diode will be reverse-biased when clamping, as explained below.

A large value resistor will not likely protect the gate anyway, it's a permanent breakdown and insulation damage that occurs, not like a diode breakdown. That's why the ESD zener diodes are on the gate lead, to prevent excessive gate-source voltage.

So, why put any resistor at all in there you ask? Well it's so the other (Overvoltage) zeners can do their thing. Imagine the worst case and we short the gate lead to the source, and then sadistically increase the voltage on the drain (through some external load) waiting for the D-S breakdown. When the current through the zener diodes exceeds some mA the MOSFET turns on and clamps the overvoltage.

Power MOSFETs are generally not very sensitive to ESD anyway, because of the large gate capacitance. The gate actually breaks down at something like 50V-100V typically so a lot of energy has to reach the gate. Tiny MOSFETs such as RF MOSFETs are very sensitive to ESD in comparison. However, the typical human body model of ESD is enough to damage even a moderately large power MOSFET gate.

There is another reason to put a series resistor in front of a MOSFET gate - to deliberately slow down switching. This helps minimise slew rates in the circuit and hence can reduce conducted and radiated emissions, which can be a useful EMC technique.

However, to be clear that is absolutely not what the resistor shown is included for - as others have noted, that is there to keep the clamping Zeners in the safe operating region. Also, note that slowing down switching edges has negative effects (increased thermal losses at switching edges being one) on circuit performance - as such any use of this technique is a compromise.

A gate series resistor can be used if a zener diode is also used to limit the gate source voltage to less than the Vgs rating of the MOSFET. The typical rating is 20V, and a 10V or 15V zener would be used.

The gate charge division works as follows. Assuming the gate voltage and voltage across the capacitor are initially 0 then at turn on...

V_drive is the gate drive voltage.
Qg is the total gate charge listed in the FET datasheet for the given Vgs = V_drive
C_drive is the capacitor in parallel with the drive resistor.
Vgs is the FET gate source voltage.
V_c_drive is the voltage across C_drive after the switch.

For example if you drive the FET through a 10nF capacitor with a 10V drive signal, and the total gate charge was 1nC at Vgs=10V then the capacitor would charge to...

Note this is of course an approximation since Vgs is not 10V so Qg is actually slightly less than assumed.

The effect of the parallel gate resistor is to always tend to make the voltage across the capacitor 0V. So after the switch the capacitor voltage will slowly fall from 0.1V to 0V at the rate of the R*C time constant. In a turn off cycle the charge would divide the other way so the final capacitor voltage would be -0.1V when measured with the same orientation used at turn on.

Note that you need not wait for the capacitor to discharge before switching the FET off. If you were to switch the FET from on and then to off right away the charge division in turning off would exactly cancel what happened during turn on and the capacitor voltage would be nearly 0 at the end of the cycle.

The capacitor value should be large enough that the total gate charge of the FET at the desired drive voltage yields only a small capacitor voltage, but small enough that it won't let much transient energy through. Typically you should have C_drive > Qg/1V.

The amount of resistance you can use depends on the worst case gate leakage current in the MOSFET datasheet as well as your zener leakage. The important point being that the total leakage times the series resistance must be much less than the MOSFET threshold voltage over temperature.

For example if your FET threshold voltage is 3V then R * leakage_current must be much less than 3V. The point is to prevent leakage from overwhelming the resistor and creating a DC bias that keeps the FET on or off at the wrong time.

Most FETs list a gate leakage of under 1uA max in their datasheet. Most zeners leak several uA and the leakage increases exponentially with temperature. So the zener accounts for most of the gate leakage. So 100K or 10K is probably more appropriate than 1MEG in my opinion.

Not the answer you're looking for? Browse other questions tagged circuit-protection fet or ask your own question.

25
Differences between TVS diode and Zener diodes, in diagrams and in practice?
3
Why does the relay in this touch circuit not work?
1
How can I protect my MOSFET?

1
Which kinds of FET have a body diode
0
FET array - logical switch
3
Will this circuit protect my digital IOs from overvoltage conditions?
1
How can I protect my MOSFET?
2
Drive FET/transistor based on 2 different resistances
0
3V3 uC input protection from higher voltage?
0
Connecting a low-side gate driver to a FET with current sense resistor
0
Protecting ADC pin from the opamp output
9
Why is a high value resistor necessary for grounding a MOSFET gate?