Where does electricity go after being used?

For a very long time I have been wondering, where does electricity go after being used? When I use my tablet it runs from a battery. Where does the power go?

Congratulations, you've uncovered the biggest scam of the 20th century. Read this quick before the men in black come and get you.

Think about how AC power really works. "AC" stands for alternating current, meaning it goes back and forth. The power companies give you electricity on one half-cycle, then suck it all back on the next half cycle. What a racket!

Seriously though, "electricity" is not a thing, more like a concept. "Amount of electricity" is nonsensical babble. You can have some specified amount of power, voltage, current, or other measurable properties, but not "electricity". For those that don't fully understand current, voltage, and power, it is best to just avoid using the word "electricity" at all, since they'll most likely use it incorrectly.

To therefore answer your question, electricity doesn't "go" anywhere since it's not a thing or stuff that ever was anywhere in the first place. Current and voltage together can be used to move energy around. When a battery is powering your tablet, it is producing voltage and current, thereby transferring power from inside it to the outside. The tablet uses that power to operate the computer inside, light the screen, transmit data over radio waves, etc.

Energy (and power, power is just energy per time) is not created or destroyed, just moved around. In the case of the battery powering the tablet, the energy starts out in chemical form inside the battery. It then takes on electrical form coming out of the battery. The tablet uses it in electrical form, but eventually it gets turned to heat. If you leave a tablet running just sitting there, you should be able to notice that it's a bit warmer than whatever it's sitting on. The energy that was in the battery in chemical form is now in the stuff the tablet is made of in thermal form. Eventually that will heat the air in the room, which will heat something else, etc. By the time the relatively small amount of energy in a tablet battery is spread out over a whole room, you'd need sensitive scientific instruments to detect it.

An electrical circuit is like a bicycle chain. It must have a complete circuit to flow. A bicycle chain stops turning when the rider stops injecting energy into the system (when they stop pedaling.)

A layman's answer: it doesn't "go" anywhere. It gets turned into heat, light, sound waves, and radio waves, and some of it is used up to change the state of the flash memory inside your tablet. Most of the time, heat makes up by far the largest part, because of inefficiencies. When you actively use wifi or GSM (using your device as a cell phone), a lot of energy is used to produce the radio waves. You can notice how much faster your battery is depleted while you are connected to a wifi or mobile network.

To be a little bit more pedant, it's not "electricity", but "electrical energy".

The concept of electricity we use is a simplification. It's not wrong per se, but it's far more complicated than the concepts we assume.

Here's a great resource I found, which explains in detail what electricity is and how it works. It's written by William J. Beaty, who's an electrical engineer:

Here's an excerpt from the site, relevant to this question:

Why does the electric company bill us, since it takes back all of the electrons it gives us?

The electric company does NOT sell electrons. Instead, it only pumps electrons. It pumps the movable electrons which fill the wires. The electrons are provided by the atoms of the copper. You pay for a pumping service!

The electrons themselves drift from the negative terminal of the battery, through whatever current path they happen to be on, and then eventually back to the positive terminal.

The power that they transfer gets dissipated as heat (wasted), light (e.g. display), kinetic energy (e.g. speaker), and so forth.

Electricity doesn't get used, instead energy is transferred using electrons. It is the energy that you are using. If we imagine a world without electricity, we can come up with a similar setup to how electricity is used but with something we are more familiar with.

Imagine if you had a special water line coming into your house with a return line back to the water company. The whole system was closed off and pumped water in circles. However, you could tap into this circle by putting a plug in it. Once you plugged up the line, one side of the plug would have pressure from incoming water and the other side would have no pressure. If, for example, you had a blender you wanted to use, your blender would have two tubes. You plug one tube into the high pressure and the other into the return pipe. The water pressure (voltage) pushes against a valve in your blender. When you change how open the valve is (resistance) the water starts flowing into your blender, pushes some sort of water wheel, and goes out the return pipe back to the water company. The water company is making sure that it keeps the pressure coming but bills you for the water flow. The water would not be getting "used up". They could even make the water direction alternate back and forth instead of having to push in a full circle.

As a waterwheel in a river turns, the machinery attached to it inside the wheelhouse is used to do work. In this scenario, the water is analogous to the electrons moving through wire/devices. Neither the water nor the electrons disappear, they just go from a higher energy state to a lower energy state, and that difference in energy is used to do work.

More energy is needed to put the water/electrons back to a higher energy state. 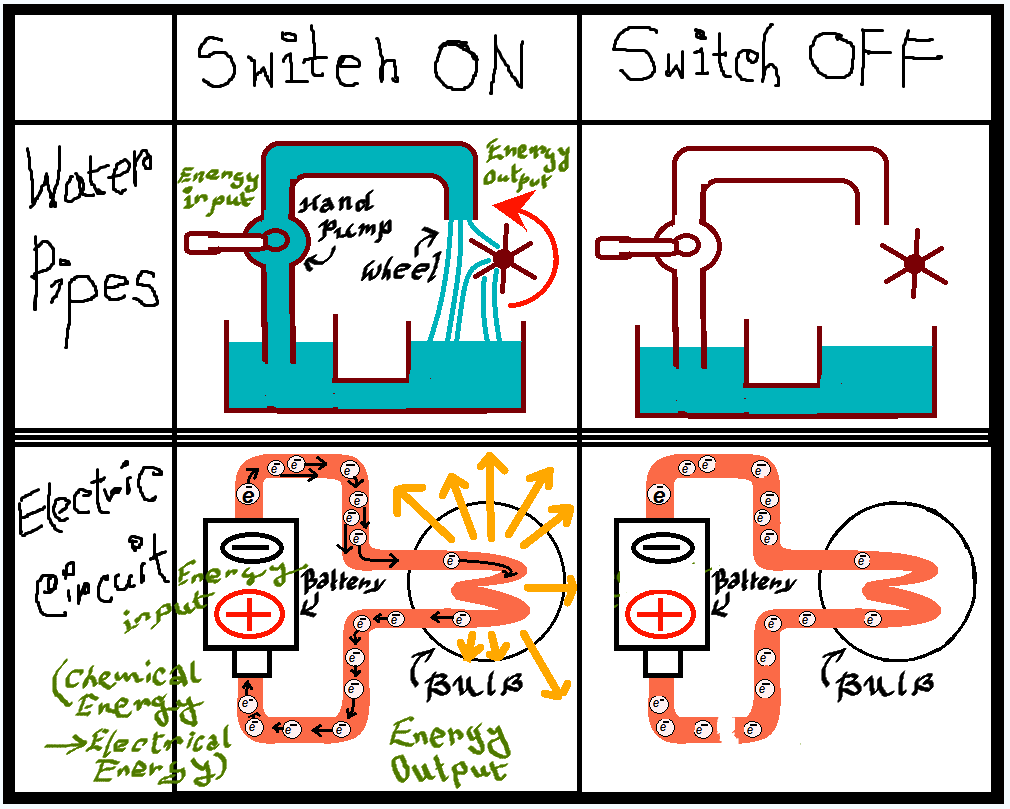 Take an analogy with water-flow . ( Current=>Flow of something)

If you stop the hand-pump, water would not flow, and energy transfer in form of water-flow would stop.

But the water would still remain there.

Likewise, Electric-current is the flow of charge.

If we break the circuit, current of the charged-particle, will be stop;

but the charged particles (and they're chemical component of the matters) would still remain there.

They would just stop there overall(net)-movement.

They would also not be able to carry the energy.

When the battery finishes; all the reactants in the battery get converted into product as much as possible (the remaining reactants, if any, no-more could be obtained in equivalent amount) . so it can no-more continue pump electrons.

When battery finishes, The electrons remain within the constituent-material of circuitry.

While battery works and gradually finishes, the energy (that was stored in battery), gets out to environment The energy (=unstability; or ability to do work) that was stored in new-battery, comes out (when the electrical current do some work in the gadget). The energy, gradually lost in the surroundings when the gadget works. Say, for your tablet-computer, the energy lost as the lights coming-out from display, the sound from speakers, the heat from electric-paths, etc.

The other questions talk about flow of electrons, not really answering the specific question. In the case of a battery powered tablet, it starts with chemical energy stored in the battery. As the device is active, this chemical energy is released to move electrons round the various circuits. Some is converted to photons, and released as light from the screen (not a lot, maybe a few %). Almost all of the energy is converted to heat. Everything the processor does produces just heat, the computational work does not store energy. A more efficient processor can do more computation for the same amount of heat generated. You often won't notice this heat being generated by battery powered devices because the rate of heat generation is low, and the temperature gain is often small.

Although your main question says "electricity," your correct it by rewording your question as "Where does the power go?" The answer is simply, it mostly gets converted to heat. Even the portion that gets converted to sound, photons, and radiation, are considered a "form of heat" (they "warm up" some portion of the universe).

I like this question because it shows so many differing points of view - here is mine.

The electricity (in this case, energy from @EthanT's tablet battery) is hard to define as a general term because it has so many forms from its inception; it was mined or captured, and converted, transmitted, converted again chemically in the battery, then performed the work in the tablet. At each step along this path there are losses as everything goes to a higher level of entropy. When all is done, the matter and energy are all still present somewhere, but they are in a more random state, making them less useful to perform specific work. So nothing is lost, it is just progressively more disordered until it is as random as it can get.

One point of view anyway.

10
Am I compensated by the electricity company for electricity that exits my home on the neutral wire?
22
Do electrons actually flow when a voltage is applied?
5
Electrons of the current in a circuit?
1
A basic description of capacitors - but is it wrong?
0
why we pay electricty bills?
0
How is AC travel from a central to home?

5
Generating electricity by moving a door
3
How does this FM transmitter work?
2
Can a high voltage rated push-button switch be used on lower voltages?
0
Is it safe? Where to put the fuse?
1
How a battery is being charged and used as the same time?
1
DC Motor power diminishes quickly
0
What circuit is used in industry for SCR firing?
0
How much electricity can be generated from stove's heat?