I have a CR2032 coin cell battery and using that I am operating a BLE 4.1 module. When I connect a fresh battery in to the module the voltage shows 3.3 V, and after continuous communication with the mobile application after a few days the battery voltage becomes 1.8 V which is the minimum value required for the BLE radio for communication.

Good question. This is one way that primary (nonrechargeable) Lithium cells may differ dramatically from secondary (rechargeable) Li-ion cells so it is often a source of puzzlement. Namely, Li-ion (except LiFePO4) discharge and capacity curves typically gradually taper down from the initial 100% capacity voltage to the termination voltage. However the curve for Lithium coin cells is usually much less steep, i.e. lower slope or more flat, so the open circuit resting voltage near empty remains much closer to the initial 100% capacity voltage than it does in the Li-ion case.

For example, let's consider a typical discharge + resting voltage curve for a 3V LiMnO2 CR2032 coin cell (from here). The graph shows repeated discharge cycles, where each cycle consists of: first, a constant 1mA load for 11h, then 8.5hr rest, then 22mA pulse for 10 seconds, then a 30 minute rest. Notice that even when the coin cell is very close to empty (around 360h) the open-circuit resting voltage (2.7-2.8V) shown by the sawtooth peaks still remains very close to the initial 3.0V at 100% capacity. 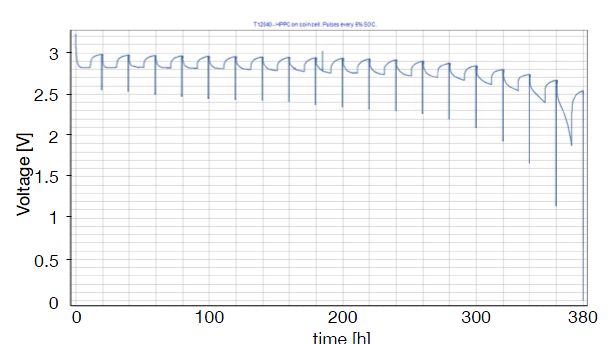 Contrast that to an analogous typical Li-ion discharge curve below. Notice how the peaks drop off much more sharply towards the terminal voltage than they do above. Indeed the curve formed by the resting voltage peaks above is almost flat for most of the discharge, whereas the same curve below has a much greater downward slope. 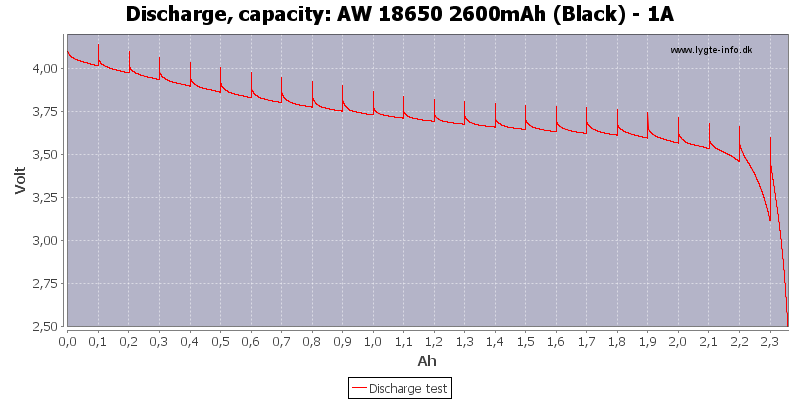 The voltage rebounds after the load is removed because the cell has some nontrivial internal resistance \$R\$. This will cause a voltage sag of \$I\cdot R\$ at current \$I\$, which will disappear when the current drops back to 0. Such voltage rebound doesn't happen instantaneously due to time constants and exponential decay of various internal electrochemical processes (e.g. diffusion) that are components of the internal resistance. This is easier to see in the first graph where the sawtooth shape of the rebounding voltage is more evident. Symmetrically, there will also be \$I\cdot R\$ voltage downspikes when the current is increased which, is evident in the downward sawtooths in the first graph when the 1mA load is started, and also in the much larger downspikes at 22mA (but they don't last long enough to easily observe the sawtooth shape).

So, in summary, because primary Lithium coin cells have a flatter discharge curve than Li-ion cells, it is more difficult to use their open-circuit resting voltage to estimate remaining capacity. Testing them under load will yield better estimates, esp. if the load is nontrivial (e.g. notice how the curve formed by the lowest points of the high-current downspikes on the first graph tapers off much more sharply).

The battery chemistry will always try to keep the voltage at a certain point, say 3.3 V.

When there is a load that drags the voltage down, the battery needs to expend chemical energy in order to fight that, to keep the voltage up.

When there is no load on the battery, it is easy, and even a near empty battery will be able to build up some voltage over time.

This is why you have to put a modest load on any battery in order to get a reliable voltage reading to estimate its remaining capacity.