How did four-course LF radio navigation ranges have their beams other than at 90° / 180° angles?

The four-course Low Frequency Radio Range system used for aircraft navigation (in the US and elsewhere) in the 1930s and 1940s used a pair of directional antenna (with figure-of-8 shaped radiation patterns) at 90 degrees to each other. One antenna would transmit the Morse code pattern for "A" (⋅-) and the other for "N" (-⋅), as follows:

When the aircraft was on course, the signals from the "A" transmitter and the "N" transmitter would be at equal value and overlap to form a continuous tone:

If the antenna patterns are at 90° and the transmitted power is the same for the two signals then the system provides four different courses that a plane could fly (or eight, counting reciprocal courses away from the station).

Examining charts for actual installations, however, one often sees that the four courses are not at 90° angles:

How was this in practice achieved? I can see that by increasing the relative strength of one transmitter compared to the other the courses could be adjusted so they crossed at other than a right angle (like this, for the top diagram, supposing A is stronger than N):

But how would it be arranged to have asymmetrical patterns such as the one in the Stout Field diagram above, where the opposing courses are not at 180° angles to each other?

Here is the detailed explanation from Edward Laporte's Radio Antenna Engineering article on the Adcock Antenna. Briefly, the relative phase of the voltages feeding each opposite pair of antennas is altered a few degrees from the normal 180 degrees. This causes the opposing lobes of the antenna pattern to become "lopsided" with one lobe shrinking and the opposite one expanding. By controlling the relative strengths of the A and N sides this way, the on-course azimuths can be altered. Additionally, a goniometer is used to rotate each of the two patterns separately. Taken together, you can achieve something like this: 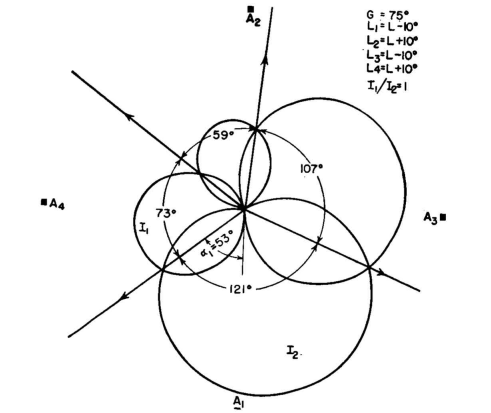 You can vary the strength of each of the four beams independently. Assuming the antennas are basic dipoles is overly simplistic.

Also, the terrain around the antenna array has an effect on the received signal strength for each beam.

Not the answer you're looking for? Browse other questions tagged rf antenna transmitter navigation or ask your own question.

3
How to conduct "Transient Power" measurement according to ETSI EN 300 220-1 (v2.4.1)?
1
PIN Diode T-R Switch for use with RF Power Amplifier
0
Antenna size used in wireless morse communication
0
Measure phase difference with less than a full wave?
0
Passive RFID design assistance
2
Maximum power transfer and minimization of signal reflection: When should what be applied