What is the rectifier's role in this AC dimmer circuit?

I just came across another variant which uses a rectifier: http://www.electroschematics.com/10115/triac-lamp-dimmer-snap-on/

I was also wondering why there was a rectifier in a AC fan speed control circuit in one of my previous question: Controlling a single phase AC fan with a 0-10V DC input

What could be thathe job of the rectifier in the AC dimmer circuit schematics above?

Could it that be the rectifier in the previous question's circuit was used for the same reason?

I suspect that the purpose of the bridge rectifier in this circuit is to quickly discharge the timing capacitor, C1, on polarity reversal. This may be a requirement for motor loads due to the current being somewhat out of phase with the voltage. For an incandescent lamp application the circuit would work well without it.

Without the bridge the operation is as a regular dimmer and the diac (DIode for Alternating Current) behaves like a bi-directional zener diode with a fixed breakover at about 30 V. The capacitor (C1) charges up at a rate determined by R1 wiper position and when it reaches 30 V it breaks over and discharges the capacitor into the triac gate. Due to the high resistance of the pot only a brief pulse is given but the triac characteristic is that it will remain in conduction until the current falls below the holding current.

As mentioned already, the typical circuit may not work well with inductive loads and it may be advantageous to shutoff the gate current promptly on polarity reversal. I suspect that what happens in this circuit is as follows. Assume that R1 is at mid position and that the circuit will trigger at about 90° into the cycle.

In summary, the bridge actively removes residual charge from the timing capacitor on polarity reversal.

All this is conjecture. If anyone has better knowledge or hunch please comment. 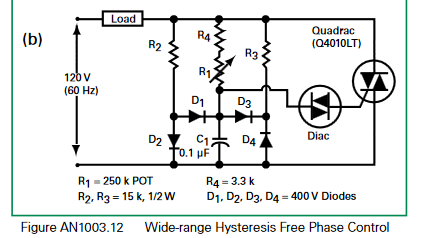 The application note explains that under certain circumstances C1 may be charged much more than 0.5 to 1.0 V I surmised earlier in this answer and that it could be over 20 V if the diac hadn't gone into conduction. Without the capacitor reset circuit (R2, R3 and the bridge rectifier) C1 would have to be discharged through the pot before it could start to charge the correct polarity.

Not the answer you're looking for? Browse other questions tagged power-electronics dimmer motor-controller bridge-rectifier or ask your own question.

2
What are the extra components in this dimmer for?
21
How do ceiling fan controllers work?
0
How to make a dimmer for a 11W CFL?
0
Dim a regular light bulb
1
Light dimming regulator circuit
0
Controlling a single phase AC fan with a 0-10V DC input
0
Questions about a dimmer circuit