I have a 5V stepper motor with a 1/64 gear reduction; it looks like this: 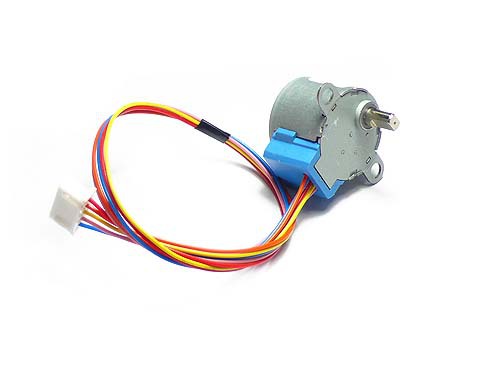 When at rest, I can't turn the shaft with my fingers. However, when the shaft turns, I can. It seems that the torque is lower when it's turning - how come this is the case? Isn't torque dependent on the gear reduction irrespective of the shaft's motion?

It all comes down to inductance. But first lets recap on motors.

You can think of a stepper motor as essentially two independent L-R circuits - one for each phase. The inductor represents the windings (windings = coil = inductor), and a resistance which represents a mixture of resistive losses (winding resistance, etc.) and mechanical power. For maximum torque you want to get as much mechanical power out of the motor as possible, which means you want the "resistor" in the L-R circuit to dissipate as much power as possible.

However you have an inductor in the circuit, what effect does that have? Recall that the voltage across an inductor is given by:

In other words, the faster you try to change the current, the higher the voltage drop of an inductor.

In our simple motor model, the supply voltage is shared between the inductance and the resistance. The higher the voltage drop of the inductor, the lower the voltage drop of the resistance, and hence the lower the power output of the motor (and by extension torque). So if you try to change the current faster and faster, more and more voltage is dropped across the inductance, and so there is less power output from the motor.

We can see this in the diagram below which shows the voltage across the inductor and current through the resistor vs. time - notice how it takes time for the peak current to be reached. You can read more here.

Now recall what happens when the motor is moving. Unlike a DC motor, with a stepper we are sequencing the windings - turning them on and off and/or reversing the polarity. Clearly each time we 'step', the current will change in winding, which as we have seen above reduces the output power.

If the speed is low (or stopped), the current has time to rise to its peak before the next step. However if the speed is high, the step time shorter than \$5\tau\$ in the above diagram, the current doesn't have time to reach its peak and hence the peak power output drops. And this is where your problem lies.

With such a high gear ratio, the motor has to spin very fast compared to the output, and so you lose a lot of torque in the process - an at some point you lose more torque due to the switching speed than you gain from the gearbox.

So how do we deal with the problem? Well, modern stepper motor drivers use a much higher voltage than the motor is rated for, but they ensure that the current is limited to within the motors ratings. It does this using PWM (a chopper circuit). This allows the voltage drop across the "resistance" to reach its peak much faster as there is more voltage shared between the inductor and resistor. As a result, you can run the motor faster while still maintaining torque.

The current limiting is done by measuring the current through the coil and turning the supply off just before it goes too high for the motor. The current will then slowly start decaying again, at which point the supply is turned on again, and so on - essentially PWM, with the duty cycle being adjusted to ensure the current is limited to safe levels.

Drivers such as the DRV8825 and A4988 which are common amongst hobbyists use this technique to allow for higher top speeds.

Not the answer you're looking for? Browse other questions tagged motor stepper-motor torque or ask your own question.