(source). Both are on the same stripboard and connect to a single LM324.

One of the oscillators works beautifully, the other doesn't. The oscillator which doesn't work connects to the opamp with around 3cm of shielded wire (my original stripboard layout wasn't designed for two oscillators, so this was a hack).

I have checked my breadboard around 20 times and am fairly certain I haven't just made a silly mistake in the non-functioning oscillator.

Is there a possibility that the length of these wires may be preventing the oscillation? I understand that the successful functioning of the wien bridge can be sensitive to things being just so, but I don't know if the inductance in shielded wire this length could be enough to stop it from working.

Unfortunately I don't know enough about electronics yet to properly troubleshoot the circuit apart from simple continuity and resistance tests. FWIW, the dual gang pot for the dud circuit is better matched than the functioning circuit (~1Ω vs 10Ω).

I'm using the same power supply (two 9V batteries) for both oscillators and have connected the +9V to both circuits, as per the awful diagram below: 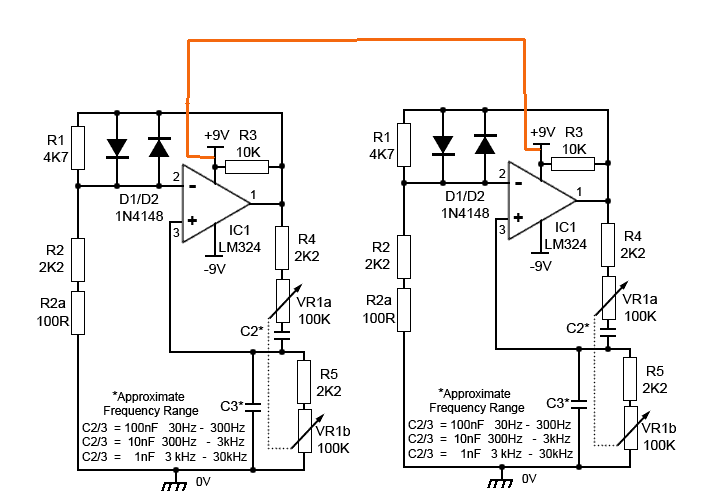 (the -9V and ground connections have also been made directly to the batteries in both circuits).

Is this naive? Have I now made the two oscillator circuits dependent on each other as the two 10k resistors are now connected?

While this is not certain, there is a very good chance that you've been burned by resistor tolerance.

Replacing your resistors with 1% units is a good idea, although it's still possible that the unit won't oscillate. If this happens, try removing R2a and see what happens. You might also measure your existing resistors and see just what values you really have (do it with the resistors disconnected from the circuit).

Not the answer you're looking for? Browse other questions tagged oscillator troubleshooting wien-bridge or ask your own question.