Can a generator have the coil oriented around the rotational axis?

I see a lot of examples of simple science fair generators with the coil axis perpendicular to the rotational axis of the magnets. I have made one with the coil wrapped around the axis of rotation, but I cannot detect any output. (I wrapped a piece of PVC pipe with enameled wire and ran the axis of the magnets through the center of the pipe supported by a bearing salvaged from a hard drive.)

I'm not sure which of the following issues could be causing my failure:

Generators can be made with coils wound on an axis parallel to the generator axis, but they are not usually concentric with it. At one time they were known as "Ferranti dynamos", now "axial flux generator". 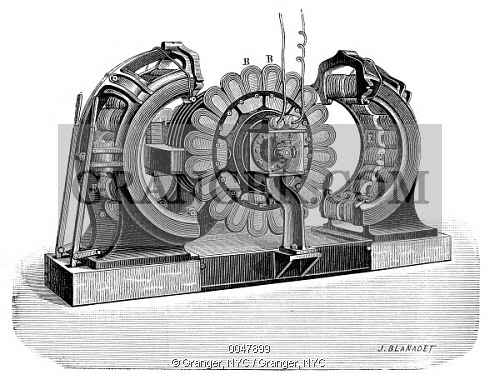 (Picture from the Granger Historical Archive Note : the generator is shown disassembled; the field coils (or permanent magnets nowadays) normally fit around the thin flat rotor.)

They often have many poles, to deliver reasonably good efficiency and relatively high frequency at a low rotational speed.

In fact the Ferranti dynamo shown here appears to be wound as a single continuous coil, and it is indeed concentric with the generator axis. The trick is that the convolutions on the rotor (centre of image) are aligned with the poles of the magnets ("easily removed for maintenance and cleaning" according to Ferranti's patent US409349) and thus cut the (axial) magnetic field, as required in JP314's answer.

Plans to build an axial flux generator are available here which will give you a good idea about them. The multiple coils in this version could be wound as a single continuous coil (probably 3 continuous coils as it is a 3-phase generator) to match the Ferranti design. But note that it inverts the Ferranti design shown above : the coil is stationary, and the permanent magnets surrounding it rotate.

0
How do I calculate the Output current of a generator?

1
From the basic principle to the actual dc generator, where are the 'coil loops'?
1
What makes the generator practical?
0
Can I coil directly onto the iron cores of a stator for a basic generator?
1
Build a simple coil generator
0
Calculating number of coil turns for a generator
0
Does the ratio of the mechanical degrees of a generator to 360 degrees have a specific term and symbol?