For example, I found a schematic that uses two inverting opamps to amplify the output of an AD590 with a gain of 1000: 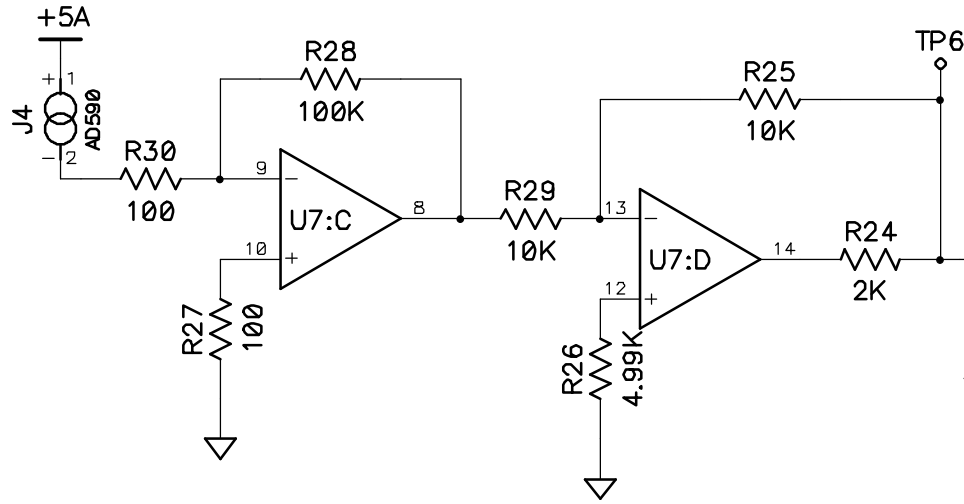 In this case the second opamp appears to be doing nothing but "re-inverting" the amplified voltage as it has a gain of 1. Perhaps this has something specifically to do with the AD590, or the opamp itself (the LT1014), or perhaps it's just to use up an otherwise unneeded fourth opamp in a quad package?

Is it be a safe assumption that it would be possible to replace these two opamps with a single non-inverting opamp with a gain of 1000?

Edit: After probing around (and just looking at the bands on the resistors) it appears that R28 is in fact a 10kΩ resistor.

You could simply ground the left end of R30 and connect the AD590 to the non-inverting input of the op-amp. That would actually be better- right now R27 is stupid- it should be 100K to match the bias currents, but with the aforementioned connection scheme it would be the correct value**. The AD590 will 'see' exactly the same voltage across it.

If you want to add R24 in series with the op-amp output it would maintain the current limiting. Note that a capacitive load in either case will tend to destabilize the amplifier, but it's worse in the circuit as shown because the closed-loop gain is lower.

As to why they used this- I can only assume they felt some need to use up the amplifiers in a quad package. A better way to do that would be to connect output to inverting input and ground the non-inverting input.

There are applications where it is better to use two inverting amplifiers rather than one non-inverting, but this isn't one.

** note that R27 may be intended to have a resistor connected between the non-inverting input and a reference voltage to bias the output closer to 0V at 0°C. As shown it will be saturated at room temperature even at the maximum supply voltage of the chip (+/-22V).

The AD590 has a CURRENT output. For this reason, you must use an opamp wired as an (inverting) current-to-voltage converter - and you cannot (directly) feed a current into the noninverting input terminal of an opamp.

The mentioned gain of 1000 is a voltage gain (but your input signal is a current). Hence, in case of an ideal current source the input current I goes through the feedback resistor and produces a an output voltage of Vout=-I*R28.

If your question is a general one - independent on the shown example circuit, the answer is as follows: There are many cases where an inverting amplifier is required - for example as active devices in active filter circuits, harmonic oscillator circuits or as a controller block in control loops.

1
Increasing precision of a practical opamp circuit when the input signal is very small
4
Op-amp output clipped
1
Why does my opamp circuit give only x10 overall gain
2
Cascaded vs. non-cascaded bridge-tied load circuits using opamps
3
How to deal with the opamp input offset in a circuit with multiple opamps with inputs connected together?
4
High Bandwidth, High Voltage differential amplifier problems
1
Understanding Audio Amplification with OpAmp
5
Non-inverting amplifier ; Single supply ; Bipolar input
1
Why does an OpAmp with negative Feedback not amplify the potential difference on his inputs?