The diagram shows part of the schematic for the late-model Minimoog VCO. In the circuit, Q7 and Q8 form a current sink, drawing a current through the collector of Q7 that is exponentially related to the voltage present at the base of Q7. This current is integrated by C7 until the voltage at the drain of Q4 (which is at present switched off) reaches 0V as detected via the voltage follower IC7 by the comparator IC8b, whose + input is held close to ground by a resistor not shown. At this point, the capacitor is discharged by Q4, and the drain of Q4 rises to 5V again. Thus the oscillator generates a falling sawtooth waveform with a frequency proportional to the current. Compensating resistor R31 can be neglected at low frequencies, and the purpose of Q5 is just to lift the sawtooth at the base of Q6 (which converts the sawtooth to a triangle wave) by 1 V_BE drop. IC8b has a bit of positive feedback to ensure a clean reset.

Further analysis is given in the Minimoog Service Manual, Section 2.3, which can be found online: http://www.cyborgstudio.com/synthmp3s/moog/minimoog/manual/minimoogservicemanual.pdf

(a) The collector of Q8 is held at ground by the negative feedback around op-amp IC6.

(b) So 5 microamps flow in R30 as claimed on the schematic [though in the opposite direction to that marked].

(e) This will charge C7 to 5V in 1ms, and give the oscillator a frequency of 1kHz, assuming reset time is negligible. Indeed the legend 200Hz/μA appears above R30.

These things can't all be true at once! Is it just (f) that's wrong, or is there some reason why the current sink doesn't give 5 μA but something more like 5/3 μA when Q7's base is at ground?

Bonus question: what is the purpose of CR2 in this circuit? 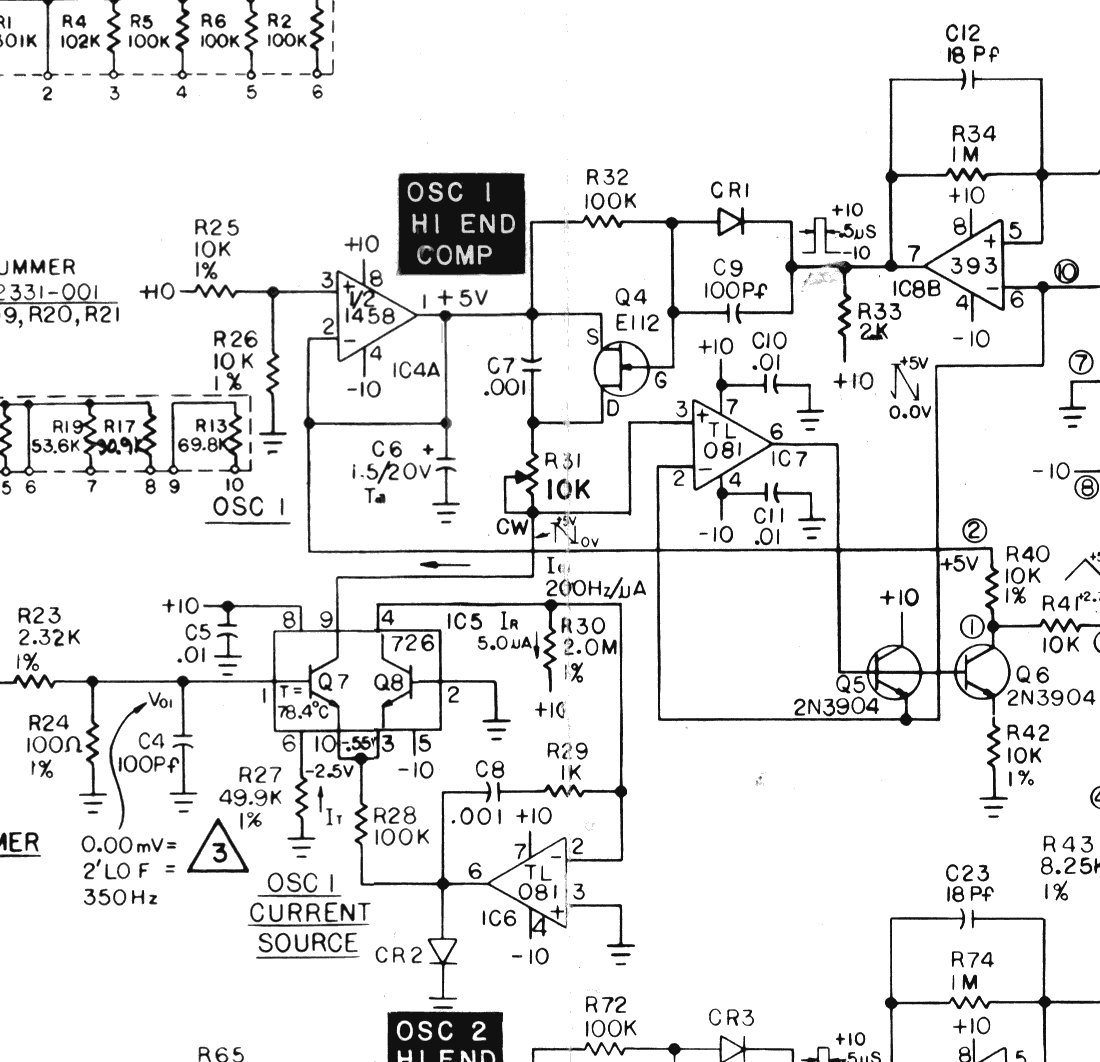 Actually, more information can be gleaned by looking at annotations surrounding the two op-amps that compute the control voltage, which tell us things like low F = 0V on the keyboard, and 2' = -5V on the octave switch. Many of the scaling resistors involved are trimmable, but it's possible to deduce their nominal values from the fact that they are supposed to give 1V/octave overall. It turns out that "0.00 mV" is not in the possible range of values at the node in question, but values around -30mV are possible, at least according to my calculations, and would give 350Hz from an oscillator with a natural frequency of 1kHz. So I think the annotation (f) is just wrong, and the other voltages given are consistent with each other. I won't give the details here.

Thanks for the suggestions; perhaps more detail could be given only by those who have themselves built and tested the circuit, a club I hope to join very soon.

I think it does not. I think the text means that there should be no DC voltage (0.00mV) at this point and that ther should be an AC signal of nominally 350 Hz (coming from oscillator number 2 perhaps ?).

CR2 prevents the output of opamp IC6 from having a voltage above 0.7 V. My guess is that this helps the opamp reach the desired state more quickly (after power up for example) and it might prevent a "lock up" situation if the output voltage of the opamp goes too high. It's a bit of crude solution but the TL081 probably cannot source much current anyway so it would work in this case.

Not the answer you're looking for? Browse other questions tagged synthesizer vco or ask your own question.

2
Simple exponential converter for VCO
1
How do I make a VCO with a LM 358?
1
Self resonant frequency of inductor in VCO
1
Voltage gain of a vco
2
VCO circuit Analysis
0
Analog exponential convert for MFOS VCO
1
VCO SN74LS624 - understanding pin out / how to read datasheet?
2
VCO Input Capacitance