Why are motor capacitors huge in physical size even though their values are in uF range?

When I see some teardowns of single phase induction motors on the internet, I see their capacitors look like: 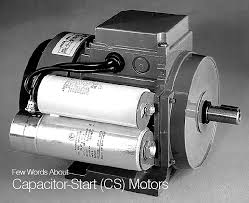 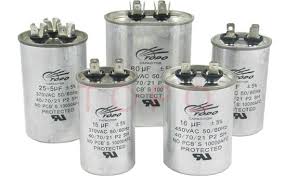 Why are they that big in size compared to other caps, even though their value is in the µF range?

capacitor motor ac
Share
Improve this question
edited May 17 '16 at 5:39

Motor capacitors are not plain electrolytics, because the voltage across them reverses at the mains frequency.

The larger value ones are start capacitors - usually bipolar electrolytic, and rated to the peak mains voltage - but not for continuous operation. They are usually disconnected by a centrifugal switch in the motor, which operates when the motor is up to speed. Consider that not only is the voltage high, and continually reversing, but the ripple current is high too (especially when the motor is still at low speed) and you'll see the apacitor has to handle unusually high power.

Smaller value ones (10s of uF) are used as run capacitors in smaller (less than 1hp) motors. These phase shift the current to the start winding, but remain connected during operation, so must be rated for continuous operation. These are usually film capacitors (or, if old enough, paper in oil) which are much larger per microfarad than an electrolytic.

In my experience the physical size of a capacitor is proportional to the capacitance times its voltage. Double the voltage, double the size.

There are several reasons, not all of them strictly technical.

The size of a capacitor depends on a number of things.

Why electrolytic caps would have problem in 230V AC

It fundamentally comes down to how electrolytic capacitors work. Electrolytic capacitors use an electrolyte as one of the plates and an oxide layer as the dielectric. The clever bit is that the dielectric layer is generated electrochemically by the capacitor itself, so damage to the layer self-heals. This allows a much thinner insulating layer for a given working voltage than a conventional capacitor construction. Also the dielectric can uniformly cover a rough plate surface further increasing the effective area.

Secondly electrolytic capacitors stop behaving as capacitors at all if the voltage goes significantly negative. This is because the electrochemical process that creates the dielectric is reversed by applying a reverse voltage. You can work arround this by putting two in inverse series but then you have even worse ESR.

The film capacitors use metal plates and plastic films. This gives good linearity, low ESR and biopolar operation but it can't benefit from self-healing or microscopic roughness.

You can't just think of them as a "bigger version of the same thing". They are a totally different construction with different tradeoffs.

Not the answer you're looking for? Browse other questions tagged capacitor motor ac or ask your own question.

16
Why connect capacitors to motor body?
8
Does the physical size of through-hole ceramic capacitors relate to voltage rating?
1
Difference between capacitor start and capacitor run Induction motors?
2
Interface for Induction Motor
8
Why do DRAMs retain their state better when they are cold (when powered off)?
0
EMI Filter design capacitors problem
1
Shaded-Pole motor, how does it work?
0
What motor is this (movie)?
14
Why are these two electrolytic capacitors so hugely different in size?
0
Why 2 pole induction motors don't use auxiliary windings while running (while others do)?