could somebody explain me how does this audio amplifier circuit from old radio is working ? I understand role of last transistors 413,417 and 415,419 but what is the point of T409 and T411 and other blocks ? Another question is why we feed input through differential amplifier ? Btw do you guys know any good resources about old audio equipment design ? 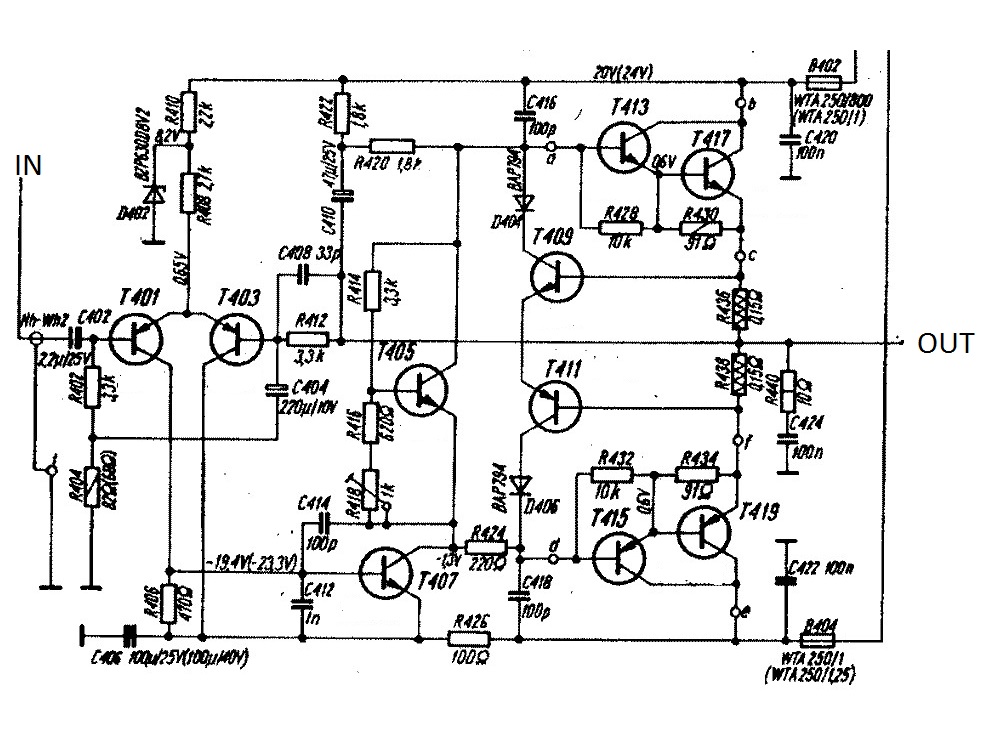 It may be an old design, but it is still in use today, especially in car stereo amplifiers. What has changed is the quality and performance of the transistors. You asked a few questions, so I will just go stage-by-stage.

1) The differential input is much like that of op-amps. It allows for some gain and a balanced wide-band response and DC stability.

3) The more bias the less distortion, but the hotter T417 and T419 become. R418 (bias current adj)has to be trimmed with great care so the distortion is low but the outputs will not overheat. C410 creates a 'boot-strap' current fed back from the outputs that boost the drive current to the output stage, by just a small amount, increasing the maximum volume that can be put out to the speakers.

4) T13 and T417 form a NPN darlington and T415 and 419 at as a PNP darlington to act as a buffer for the signal at the collector of T407, which is already at the maximum voltage swing possible (at full volume). These darlington's allow the output to drive a low impedance load such as a speaker.

5) T409 and T411 protect the output stage from excessive currents by clamping the drive signal. This can cause distortion at high volume, but it is a warning sign that the volume needs to be turned down until the distortion stops.

Not the answer you're looking for? Browse other questions tagged transistors amplifier audio radio or ask your own question.