I am using a CR2032 battery module to operate a BLE 4.1 module. The BLE radio for communication takes around 3.5ma to 5ma of current. But when I look at the datasheet of the battery (https://cdn-shop.adafruit.com/datasheets/maxell_cr2032_datasheet.pdf) it shows the nominal discharge current is 0.2mA.

My question is: during BLE communication, when current is about 5mA, will this battery be able to provide this current? Also for what purpose are nominal discharge current values shown?

I did my PhD thesis on energy management in wireless sensor networks and was working with sensor nodes using CR2032 batteries. We designed the nodes ourselves (my supervisor designed the PCB and I designed the firmware and all the energy-related testing).

I can confirm what people above say that you can draw 100mA peaks from a new CR2032 cell. But as they say, to get the nominal capacity in terms of mAh you need to discharge it at the specified nominal current and temperature.

The sensor nodes I was working on drew some 27-35mA on transmission. But transmissions lasted for 110-140ms at a time, once each minute. At room temperature using a single CR2032 in parallel with a 75mF supercap from CapXX we managed to use some 87% of the rated capacity of the CR2032 (the tested nodes were in function on average 99days). We used a CR2032 from Renata. The same setup without a supercapacitor would get roughly 10-15 days less of functional time on average. However, the supercap becomes crucial if you decide to go down in operating temperature!!! (which we did in tests to -30°C)

The consequences of discharging with higher current are that you manage to get less energy than specified from the battery. The current peaks create voltage drops and at the moment when that voltage drop goes below your brown-out voltage - your circuit resets. Needless to say at that point there is still some energy left in the cell. To aleviate this problem you could add a supercapacitor to flatten out the transmission current peaks (voltage drops).

A high leakage current supecapacitor will do more harm than good if the device needs to be powered for days or weeks.

Also do not hesitate to connect CR2032s in parallel if you need to and you have space - you basically double the current capacity.

Having said that - there is still a ton of work to be done in this world to improve energy management in such applications.

From the data sheet:

So, if you discharge at a steady 0.2mA, you will get 220mAh capacity, or 1100 hours. Discharging at a higher rate will reduce the capacity of the battery. Pulsing will also affect this, as BLE pulses to 5mA. A pulse of 5mA for a fraction of a second while there is no draw the rest of the time, could result in a equivalent draw of 0.2mA.

If you look at the graph labeled Pulse Discharge, it shows a 5 second pulse of 300 Ω, or 10mA @ 3V. A pulsed discharge like this will reduce the total capacity over the life of the battery to roughly 180mAh from the nominal 220mAh.

To answer your two direct questions:

I think the answer is in this graph of the datasheet: 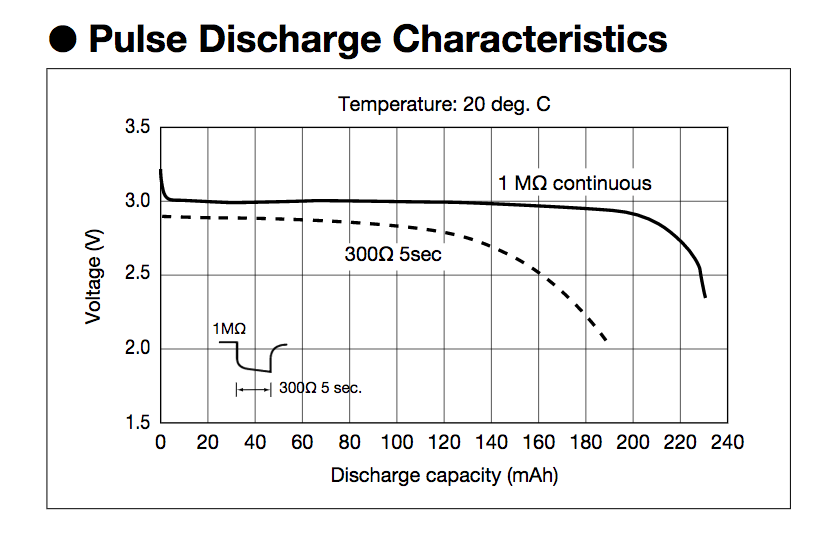 If you draw vaguely 10mA (\$3V \div 300\Omega\$) 5 seconds at a time, you will see the voltage fall off more over time, and the overall capacity of the battery will be reduced.

(This is due to more power being burned up in internal resistances of the battery. But it seems to be just fine if you're ok with the reduced capacity)

Not the answer you're looking for? Browse other questions tagged current battery-operated cell-battery or ask your own question.