I'm designing one of my first layouts and I've read a lot of articles and StackExchange questions about guidelines and recommendations.

It's a university project realized by another student that I had to correct for some major mistakes. I've corrected those and now I'm trying to improve the layout in general. This extra work is not really required, but anyway I'm trying to make things how they should be done to learn more.

Here is how I've made the layout for an oscillator NBXDDA016, connected to a DDS AD9958. 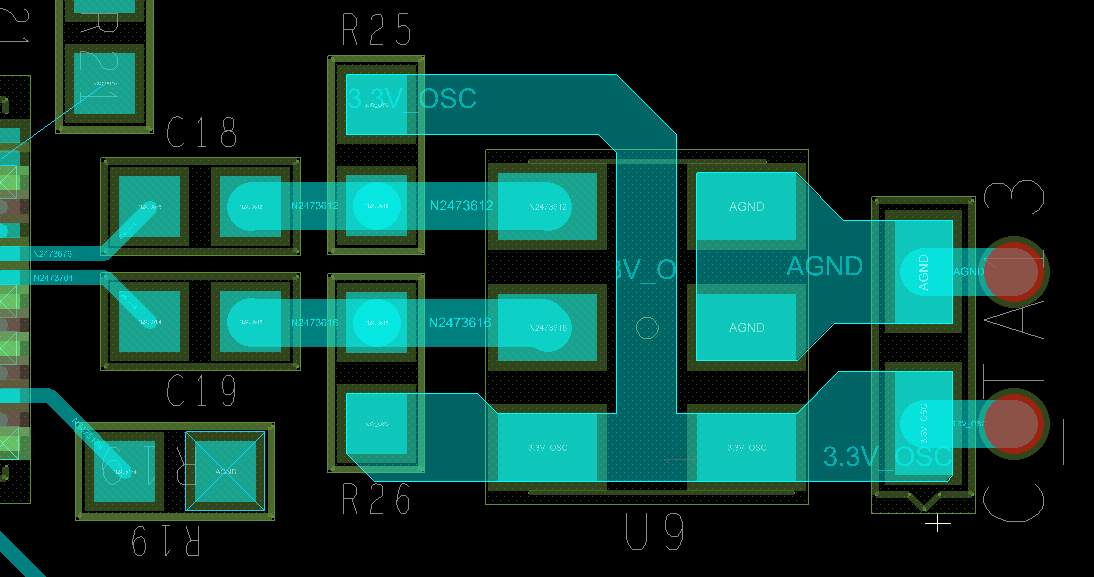 R25 and R26 are 50 Ohm terminator resistances placed there I suppose because they where present in an example of the oscillator datasheet.

The datasheet isn't clear about the oscillator's output equivalent circuit. I would guess that they aren't needed, but I would put locations on the PCB anyway to be able to place them in case they are. If you don't place them, you'll likely get a 2x larger signal at the receiver, due to the reflections.

Is 10uF for C_TA13 too high value for its purpose?

I'd add 0.1 uF 0402-size (chosen with SRF at least 200 MHz) as close to the oscillator power pin as possible, and probably 1 uF 0603 or 0805 sized somewhere nearby as well. Smaller values (also close to the power pin) might even be helpful to keep the higher harmonics of the clock frequency from getting in to the power lines and causing radiation.

Decoupling near the termination resistors is also probably a good idea. Again I'd probably start with 0.1 uF 0402 placed as near as possible to where each of those resistors connects to 3.3 V.

I've tried to connect all supply and ground pins together before going to the ground and power planes with vias only at one point. Do you see any problems with this layout?

I'd probably just give each VCC connection its own via to the power plane, but your design will probably work okay too.

Should I connect the oscillator ground with the DDS ground on the top layer and then connect to the ground plane only at the thermal pad of the DDS?

Again, I'd rather just have a via (or more) for each ground pin of each device/chip. The idea is to minimize the inductance connecting the chip/device to the "true" ground net.

Other Q&As on the site make a big deal about power and ground islands for each chip. The one I remember is related to a microcontroller. In that case you're trying to protect sensitive analog circuits from switching noise generated by the uC. Here you have equally noisy and (more or less) equally sensitive parts (oscillator and DDS), so I wouldn't privilege one over the other, I'd just give both of them the lowest possible inductance in the power and ground connections.

Not the answer you're looking for? Browse other questions tagged pcb oscillator termination or ask your own question.