I want to drive multiple strings of XTE LEDs (total of ~36 LEDs). The relevent (-ish) specs are as follows:

According to some calculations, I found that the larger the voltage dropped across the resistor the more stable the LED current is with shifts in supply voltage. Voltage drop ratio between resistor and all LEDS in a single string determines some part of current stability. Is this generally true when looking at voltage source deviations? I have looked around and haven't found something that explicitly confirms this.

But I don't want to use a large resistor as too much is dissipated in the resistor. For simplicity, I want to choose a small [resistance] resistor and use a power supply with tight voltage tolerance (1%, according to some Meanwell HLG specs). Will the right PSU be enough to maintain a fairly consistent voltage and thus consistent current?

Here is my follow-up concern, will thermal runaway be a large concern because of the small resistors? Say I use 2 strings x 18 LEDs = total of 36 LED. This is using a constant Voltage source, not a CC source.

How big of a voltage difference should I expect between each string of LEDs due to dissimilarities at the per LED basis?

Would splitting up into smaller series strings like a 4 x 8 LEDs while still using the same ratio of (Voltage drop over Resistor)/(Voltage drop over all LEDs in a string). Is thermal runaway better/worse/no different in this scenario?

You ought to consider a switching LED driver like this: - 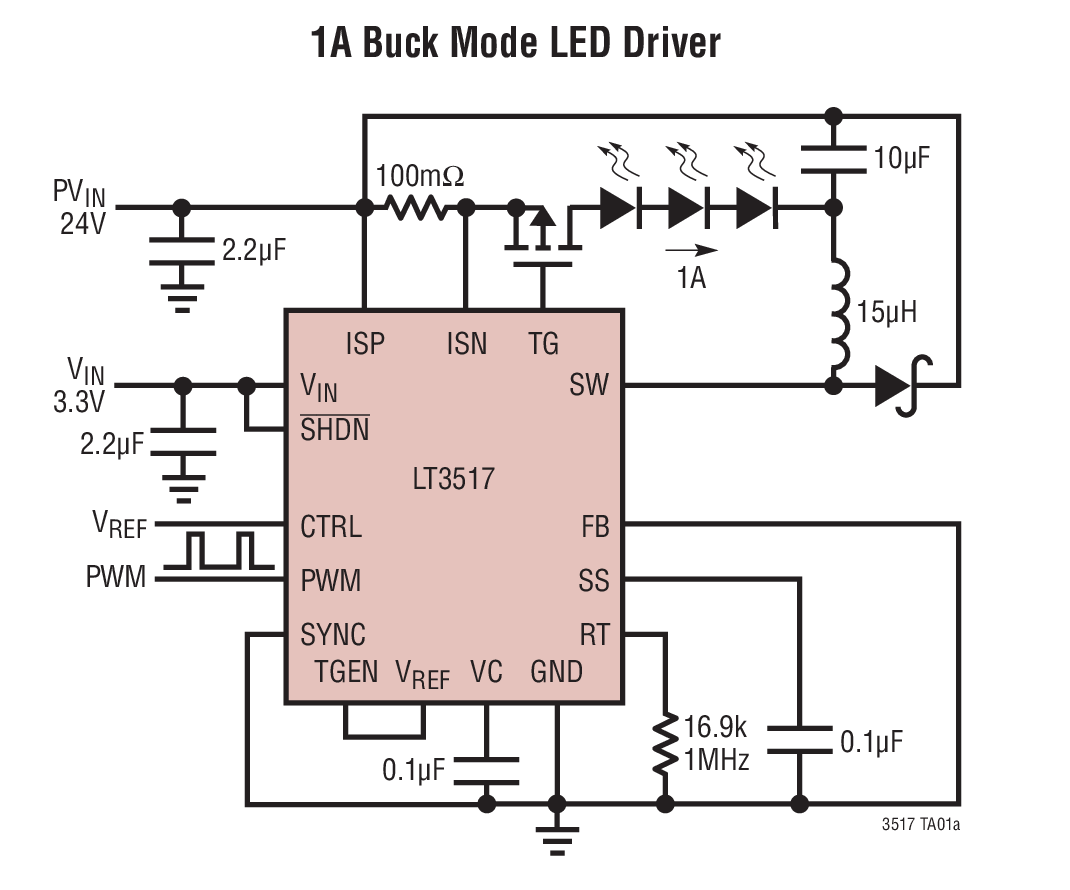 Just google "1 amp buck led driver" and look at the thousands of images of solutions. It's a constant current driver with very little heat loss. You can get them in various shapes and sizes and some even have a boost regulator on board to drive several LEDs from a low voltage source.

What is your power (voltage, current) availability? There are online calculators that will give you the optimal parallel/series connection scheme for the LED parameters and voltage available.

18 LEDs in series would be about 55 volts, at 0.5 amps that's a fair amount of power in one string. You probably want to use active current controller, simplest would be a mosfet with a series resistor and a transistor pulling the gate closed when 0.5A is achieved. Be aware that the forward voltages can vary a fair bit and with 0.5A you can end up dissipating a lot of heat in the current regulator. I actually designed fully analog LED controller circuit with feedback to boost converter to control excess voltage recently.

It can all be done with exploiting voltage drops over components to "trigger" transistor base to achieve pull-down.

I'd try to find LED boost controller first however which will do it all for you.

Edit here is an example of the kind of circuit I'm talking about. They both do essentially the same thing but the 1st one is much easier to understand. Constant current circuit with transistors/MOSFETs design comparison

If you don't need PWM then just add a pull-up resistor. That 100k is somewhat excessive though. Bear in mind most FETs are limited to 10 or 20 volts at the gate so you have to do voltage division if you're going to use your 55 volt supply.

Not the answer you're looking for? Browse other questions tagged led parallel current-limiting thermal or ask your own question.