How do I build a bracelet that vibrates once every n minutes? [closed]

I intend to establish a few new personal habits that eventually become second-nature to me. To assist myself, I want to wear a bracelet that vibrates every, say, 5 minutes all throughout the day as a constant reminder to keep up whatever new habits I'm trying to establish.

Alas, no such bracelet exists on the market. I'll either have to design and build it from scratch, or somehow piece one together from purchasable parts. (I did think about using my mobile phone for this purpose, but I don't always keep it on my person and it's not waterproof.)

My requirements, in decreasing order of importance, are very simple:

I would prefer to build this thing from existing parts since I assume that'll be easier and faster, though as a result I understand I may not have as much control over the details. I imagine the end result will look something like this Adidas "ion loop" bracelet (basically, a regular bracelet with the vibrating component thrown on):

How should I go about building this thing? Is there a small, vibrating component I can buy and just attach to any old bracelet? Or is there perhaps something better I can build with a bit more of an investment?

To summarize what I've learned so far, I need:

Finally, if there is a specific way I can make this question better (perhaps break it up into smaller chunks?), let me know.

For the vibrating part, look into the little motors used to vibrate cell phones. These are intended to be low power and just produce vibration. They cause the vibration by having a off-center weight on the shaft.

Power will be more tricky. Some form of coin cell is probably the best bet. I've never used a vibrating motor, so am not sure how much current it requires and therefore whether a coin cell can provide it. Something small enough to be strapped to your wrist but run a vibrating motor every few minutes for a month simply may not be possible with today's technology. I'd probably flip it around and see what the best you can do is with one or two CR2032 coin cells. Those are mass produced in very high volume, so give the most energy for the cost in a small battery.

This first thing to do is find specs on a vibrating motor and see where you're at. You can post them here so we can discuss where that leaves you.

Added in response to your additional questions:

I looked at the first motor you picked. While it's in a cute package, it doesn't look like a good fit considering feeding it power is a top issue. As I said in a earlier comment, the lower voltage motors seem to be more efficient. Jameco, for example, has several motors rated at 1.3V and 80mA, which is almost 1/3 the power your motor requires. Here is one of several with these specs.

Since convenient batteries are 3V (one or two CR2032 is a obvious choice) and lots of chips won't run on 1.3V anyway, it makes the choice of drive clear. Use a microcontroller like a PIC 10F200 instead of a 555 timer. Long term timing, like 10s of seconds or more, gets tricky with analog electronics. But the real kicker is that the micro can PWM the motor whereas the 555 timer can only turn it on or off. You could use a second 555 as a oscillator gated by the first, but this is getting more and more silly. A 10F200 comes in a SOT-23 package, which is smaller than even a single 555 timer.

Yes, you need some way of dumping code into the PIC. That may be a issue if you are only going to do this once. If you plan to do more electronics projects, then being able to utilize microcontrollers will be very useful anyway. For this project alone, you don't need any debugger hardware. This is a very simple program that can be completely tested with the simulator. The free MPLAB software suite from Microchip includes the assembler, librarian, linker, IDE, and simulator. All software you need to develop this firmware is freely available.

As for the drive transistor, I would use a good N channel low side switch. A NPN bipolar would work too, but we are dealing with low voltages and efficiency matters a lot because battery life will likely be less than you want anyway. The IRLML2502 can do this job nicely, and is also in a SOT-23 package. Just connect the PIC output directly to the gate. To turn on the motor, the PIC will actually be doing something like turning it on for 3 cycles out of 7, or maybe straight half the time depending on how the motor does at low voltages as the battery discharges. The battery voltage will also be lower than rated when the motor is on due to the current draw. Don't forget the reverse Schottky diode accross the motor to kill inductive kickback.

In 2000/2001 I built something that did essentially this as a "disability aid". A small number were built and put in use

Swallowing as a means of saliva control is a natural reflex for most people - so much so that the vast majority of people would not realise that they do it - or what would happen if they don't occasionally swallow. Many people with Cerebral Palsy can have a lack of awareness of "drool control" and salivation is a common side effect of cerebral palsy - and a major bar to "normal" social interaction. Suitably committed CP sufferers may be able to control salivation if reminded of the need to swallow at regular intervals.

My device addressed this need by providing a vibrating alert with user variable inter-alert period, vibrate pattern and vibration amplitude. A user programmable timed reminder with discreet user-notification obviously has many other uses. A tone alert was also an option. In some applications tone only was used.

Basic operation was as simple as user on/off disable with a switch press and vibrate and/or audible signal confirmation BUT functionality was user or care-giver programmable as desired. Interface was 3 x spst push buttons which allowed repeat rate, length of vibrate pulse and number of pulses to be varied. Vibrate amplitude was also programmable to allow "enthusiasm" of alert and audibility to others to be traded off. At full amplitude, if placed on a table the unit would happily walk across the table under vibration and fall off. The optional beeper used a self oscilating DC powered sounder using a wound electromagnetic element rather than a piezo as these allowed easier compact consistent output at low voltage with good volume.

The program was written in (don't tell Olin) ME Labs compiling BASIC - making the logic easily transferable to other languages or processors.

Assuming the documentation is still available in my records (which it certainly should be) the program is available to anyone interested for free for non commercial use. Even if wiring in another language for another processor family this should allow quicker implementation - but the task is a simple one. See my user page for email address.

DIY A customer alerter using either electomechanical vibration or piezo actuation should be "easy enough".

"Tick" In many contexts a very subtle audio cue may be acceptable. eg a short sharp low amplitude "tick" noise (fricatives with no apparent tonal information)(eg click tongue, snap fingers)(but QUIETER) may suffice. Even if audible to others they may well not be able to locate or identify it :-) 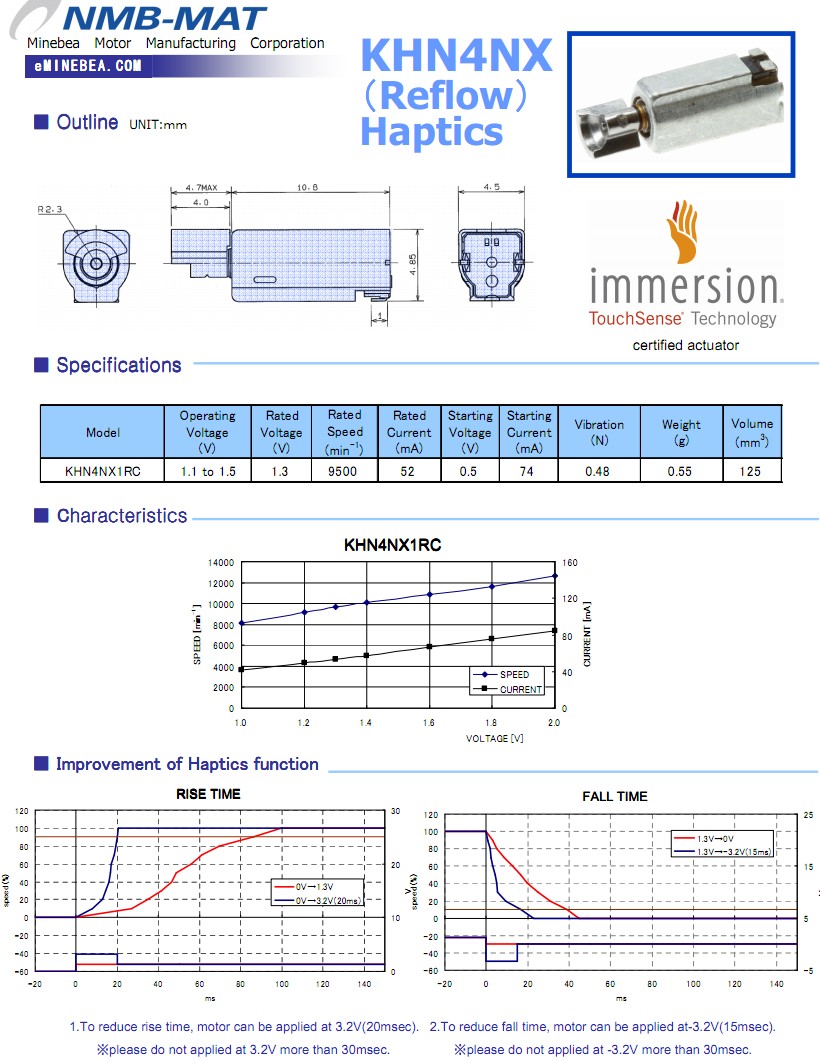 Manual for my Ribbet implementation here (2001) .

A microcontroller would be most flexible, but if you wanted to "roll your own" then a dual 555 or CMOS Schmitt inverter or counter solution would be easier if you have no experience of microcontrollers.

You need a coin cell, a vibrating motor, a tming element (a small microcontroller will do), and FET or transistor to drive the motor. An on/off switch might be handy too. And you will have to do some calculation to check how long the coin cell will last. Maybe add a flashing LED for the geek factor and to check the battery.

EGM has some cheap vibrating motors: http://www.goldmine-elec-products.com/products.asp?dept=1107 but you might prefer an 'enclosed' version, but check whether the vibration is strong enough for your purpose. I sell http://www.voti.nl/shop/p/MOT-10.html

You will definitely end up with some bulk, basically limited by how small the vibrating motor and battery need to be.

If you do a Google search for "cellphone vibrating motor" all kinds of stuff pops up. I didn't have any luck finding data sheets for the parts, but a few of them have photos for scale that show they will easily fit on a fingertip.

You need that, a battery, and little bit of PCB with circuitry for the timing and motor pulsing. I'm used to using 100+ pin MCUs to do anything so I probably will suggest something that is overkill. For example, NXP makes a Cortex M0 part in a ~2x2mm package and TI has MSP430s in 4x4mm packages. I'm a software guy though, so I always think in terms of writing code to do something, someone else can probably suggest a circuit that doesn't need any software.

Prototyping something that does what you need should be very easy, but assembling a usable version that is small and light enough may be a challenge, because you'll want to use the smallest, densest board and components you can and working with tiny SMDs is a challenge for hobbyists.

I will add, if you want to try some off the shelf stuff, the Arduino Nano might be worth considering as a base for an initial prototype. It is probably larger than you want for a final project at .73" x 1.7", but you can wire up a battery and motor and just wrap it all up in a wad of electrical tape and have a prototype that might last a few days at least.

Another option is the Lilypad Arduino which is again a bit large at 2" in diameter but it has a flatter package that may lend itself to being stacked with a button cell and motor.

An advantage with starting there if you are new to hardware design is these are proven off the shelf designs that you can order online, and are open source so you can download the schematics and Eagle files from arduino.cc. They have components you won't need for a final product like connectors, pin headers, LEDs, so once you have a working prototype you can start with something that works and strip your own board design down to the bare minimum.

Not the answer you're looking for? Browse other questions tagged components design actuator vibration or ask your own question.

2
What is the job of the capacitor in a 555 circuit?
0
Small Vibrating Motor at Set Intervals
0
Vibrating bracelet controlled from cell phone

39
How to read the text printed on top of every IC?
6
How to build stuff with random components
1
Is there an IC that can charge multiple NiMH batteries at once?
1
How to build a multi LED blink circuit triggered by vibration sensor?