I understand the problems with parallel LEDs sharing a current source. However, I came acrosse this LED from Cree, which, in one configuration described in the datasheet, has its internal LEDs electrically in parallel: 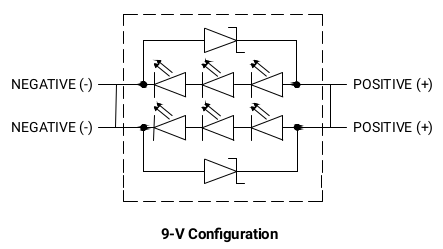 It seems like Cree knows what they're doing with LEDs, so there must be some reason this works. I am imagining some sort of extremely tight binning scheme for the individual chips before being put into the modules, and I supposed they're pretty well coupled thermally inside the package. My understanding is that they would have to bin not only based on forward voltage but also based on temperature coefficients, which seems infeasible(?)

If you look very carefully you will see the electrical connection putting the two strings of LEDs in parallel are outside the package, and they describe an alternate configuration where the strings are put in series. I also can imagine another setup where each string gets its own constant-current driver (or really beefy resistor), but that adds a lot of cost and complexity.

My question is, will using a Cree XLamp MHD-E series LED in a 9-V configuration degrade the performance or lifespan of the LED, and if not, how is this possible?

There are three points that may explain how it is possible:

So, if Cree measured that, for example, +/-0.25V was the maximum Vf mismatch they could have, considering different dies on a single wafer, and maximum temperature mismatch between dies once manufactured, they just have to account for the fact that, in the worst case, one string may see 150mA and another 250mA. That is manageable.