How do power stations maintain 50 hertz?

In the UK our mains standard is 230 V AC at 50 hertz. So I understand that the generators at the power stations need to spin at exactly 3000 RPM . This is true no matter what the source is (nuclear, coal, gas, hydroelectric etc). Let's use steam as an example here. How do they use the steam to spin the generator at a constant 50 hertz? It doesn't seem plausible to control the speed with the amount of steam passed though to that precise speed. So how do they do it?

National Grid has a licence obligation to control frequency within the limits specified in the 'Electricity Supply Regulations', i.e. ±1% of nominal system frequency (50.00Hz) save in abnormal or exceptional circumstances. National Grid must therefore ensure that sufficient generation and / or demand is held in automatic readiness to manage all credible circumstances that might result in frequency variations.

So I understand that the generators at the power stations need to spin at exactly 3000rpm.

Not constantly. Over a day it averages to exactly 50 Hz. This used to be a requirement to keep all mains powered clocks in synch. I have one on my electrical supply day/night meter.

This is true no matter what source is (nuclear, coal, gas, hydroelectric etc).

Yes, they all run in synch.

Let's use steam as an example here. How do they use the steam to spin the generator at a constant 50 hertz? It doesn't seem plausible to control the speed with the amount to steam passed though to that precise speed. So how do they do it?

It is, in fact, possible, provided there is enough steam being generated to supply the peak load. With a single steam generator supplying an island, for example, the scheduler would plan ahead using weather information, TV schedules (the famous 10 million kettles going on in the big-game half-time), large load user schedules, etc., to have the thermal plant generating enough steam in anticipation. Meanwhile, while demand is low, the plant has to vent the excess steam to atmosphere. Yes, this is wasteful.

In practice, most grids have a mix of base-load thermal plant with other fast response generators such as gas turbine and hydro which can be switched in and out quickly.

The UK also has capability to import power from France and Ireland by underwater DC interconnects. These allow connection of multiple national grids without synchronising problems.

It is plausible to control the speed just with the amount of steam or water passed through a turbine, due to the immense mass and inertia of all the generating devices spread across the electrical grid.

Although you may think each generator is operating separately to push power into the grid, that is not how it works with multi-phase alternating current. Instead there is a very real comparison between the electric grid, and old-fashioned machines that were tied together in a factory with belts, gears, and line shafts.

Power plant generators are huge and heavy, and the combined mass of their electric rotors and the turbine will together act as a very large flywheel, storing energy in their spinning mass.

When alternating current electric wires are connected between generators, the wiring functions almost exactly as if there were a huge physical shaft, or gear sprockets and a chain, connecting the generators together. So now these spinning generators, which previously were separate, now act as a combined monstrously large flywheel with very high inertia, both spinning together at the same speed.

If one of the generators changes speed, that difference is instantly transferred to the other generators through the electric grid tying them together.

(If you research the history of power transmission, you will discover that before electric power was developed, mechanical force really was transmitted over long distances from multiple power sources, using huge cables suspended on pulleys on poles. So they did actually do it that way at one time, though the distances were short by modern standards.)

This in fact is how the electric grid recovers from a power failure. Before attempting to restore power to customers, many small power plants will start up and reconnect the grid between each other, combining them together across those long-distance transmission lines, to have a single huge shared spinning mechanical inertia.

There may be a very brief sag in output as the steam and water to the generators "throttles up" to continue to support the customer load, and then once the correct power plant speed is restored, which is done only through adjusting the amount of pressurized steam or water applied to the turbines, they will activate another collection of customers and repeat the process.

Synchronous machines act as a combined motor and generator, with perfect feedback between either role. Although these are sometimes differentiated as being either a generator or a motor, in practice they are both simultaneously.

It acts like a physical gear wheel meshed with other gears, though with even greater torque because every "gear tooth" (pole face) is meshed with a matching rotating magnetic field, acting on all poles simultaneously. This meshing force comes from the energized field windings of the synchronous machine.

It will immediately begin to act as a motor the moment its rotor starts to lag even slightly behind grid frequency, and it will continue to spin at full speed in synchrony with the grid. It will draw a relatively small amount of power, just to overcome its rotor bearings and air resistance.

Large synchronous motors cannot be simply connected to the utility grid while not spinning, because the full output of the grid is reverse-driven into it as a motor and can apply sufficient sudden force to damage the rotor, deform windings, crack concrete foundations, and blow very large fuses.

The effect is very similar to forcing a mechanical manual transmission into gear with the engine at full speed and without using the clutch.

Instead synchronous machines are typically independently brought up to matching speed, and their rotation is then slightly adjusted until their windings exactly align with the grid, and only then are they fully switched into operation.

The lamp slows the flashing as the rotor accelerates and approaches the correct speed, until the lamp stays continuously dark when the rotor is both at the correct speed and the phase coil is in grid alignment. It is at this point that the power-producing phase coils are fully connected to the utility grid.

Typically very large synchronous machines are wired in reverse from how simple toy generators work, which would have field coils on the outside and stationary, and the phase windings on the inside using slip rings (or a commutator in a DC machine).

For utility-sized synchronous machines, the slip rings would need to be incredibly huge to handle the current produced by the phase windings. So instead, the field coil is on the inside, on the rotating part, and the power producing phase windings on the outside, on the fixed part.

To further simplify the design, the inner rotating field coil of a large utility synchronous machine can be indirectly powered by either a rotary transformer, or by a rotary exciter generator occupying part of the rotor.

In either case, no brushes or slip rings are needed at all, and there is no physical connection between the rotor and the surrounding frame, other than at the bearings. This significantly increases reliability and operational life between maintenance periods.

A rotary transformer works like a common electronics transformer, except there are two round loops of wire and two C-shoped pole pieces held side-by-side, with one coil fixed, and the other rotating. At any rotational position, the coils are equally coupled together, and full power can be communicated across the gap at any rotational speed or while stationary. Direct current is typically used for synchronous machine field windings, so alternating current is passed across the rotary transformer and rectified to DC by electronics attached to the spinning rotor shaft.

Utility power generators are synchronous machines. When connected to the grid, they must rotate at the rate defined by the grid frequency.

When you increase the amount of steam driving such a generator, the torque goes up and it attempts to drive the entire grid at a faster frequency. However, the actual frequency changes very little if at all, and the major effect is that the generator pushes more current into the grid relative to the other generators.

There are several very powerfull plants that maintain the frequency by means with radio/atomic clock synchronization, all the others are synced to the mains powerline, they just follow the mains frequency. These powerful plants have the ability to change the frequency if needed (several GVAh per Hz change are needed) 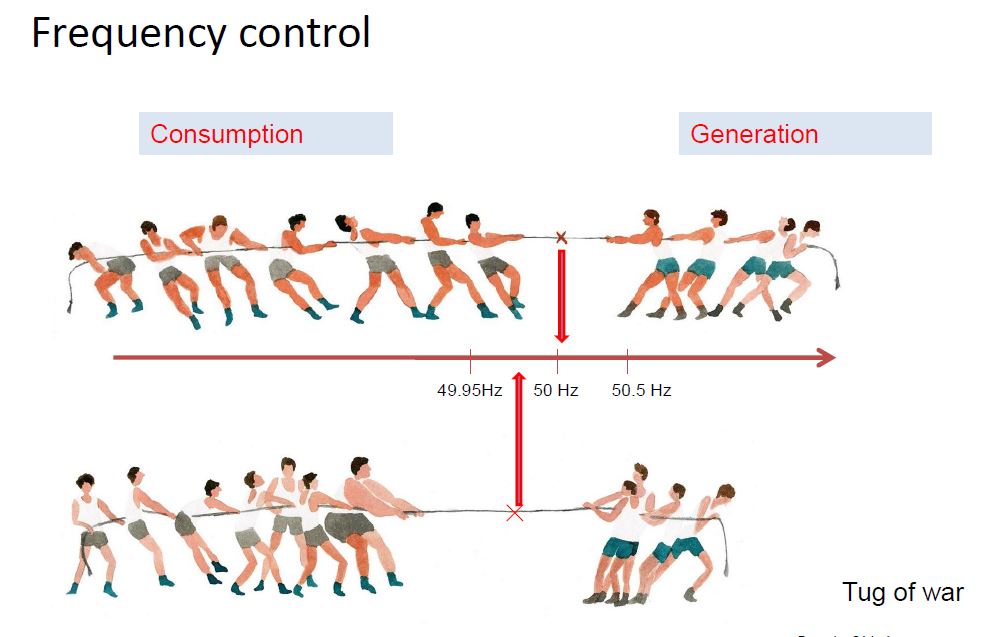 Not the answer you're looking for? Browse other questions tagged mains generator or ask your own question.

1
Parallel Operation Problems
11
The electricity grid: what keeps small power generators from being 'driven' by large ones?
2
How can I store energy from short pulses of current?
2
Is more fuel consumed immediately when spinning reserve is brought on-line?
0
How does a generator not stop itself?
1
How much power do power stations in parallel supply?
0
Is there a limit for voltage a PM generator gets to based on RPMs?