I am designing a two layer board, the problem is I do not know how to select via diameter and drill size, as well as outer and inner diameters. 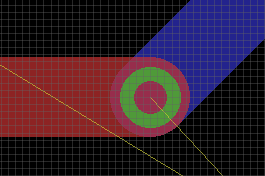 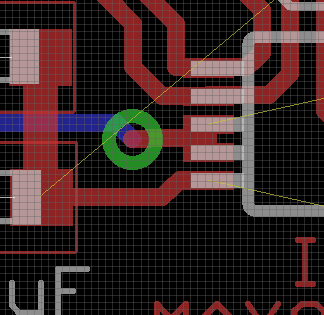 I have asked the manufacturer, they said they can make vias as small as 1 mil.

So my question is what should I choose for Outer, Inner diameter and drill size? For example, is it OK to use 10 mil drill for 6 mill trace? and what should it be for 56 and 12 mil tracks?

Also what is the green cylinder is going to look like when I get the board manufactured?

I am really short on money I can not afford to make mistakes.

The goal is to create a via with at least as much conductive area within the hole as the trace connecting to it (generally speaking, of course). My personal rule is to make the drill size diameter the same as the width of the trace, and the pad size roughly twice the diameter. This gives you a little bit of leeway in case your board is too dense to allow these sizes, and you need to adjust them. This is just a general rule that can be useful to beginners. It gives you a good size to shoot for.

Here is what completed vias look like on the board: 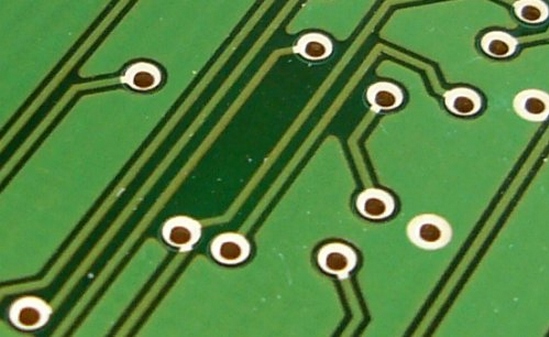 Physical size (beyond the 6 mil "microvia" limit) really isn't that important unless you need to consider current-carrying capability or controlled-impedance. Once these come into play there are a lot of things you'll need to consider such as plating type, plating thickness, plating length (thickness of your board), via positioning, etc. In basic designs, however, where you just need to bring one trace to another layer, I would suggest using 8 mil for all traces smaller than 8 mil, and for thicker traces use the trace width for the drill diameter. It's just a good rule of thumb.

A via of 0.1mm should be (theoretically) enough to deal with a 12mil trace. This assumes the via plating thickness is the same as the trace thickness, which is probably not valid, particularly for thicker boards. However, even doubling the 0.1 mm (4 mil) via diameter gives a pretty small hole. You must verify with the board house that they can drill such a tiny diameter and insert or plate a via so small. All board houses have a minimum hole diameter and slot width.

I came here with that same question, then I did some simple research and it became an answer :-)

Basically, my take is one should maintain the copper cross-section of the trace through the via in all directions, so on the same layer, and to the other layer(s) the via connects to.

I wrote a short article about this on Medium, which contains a link to a calculator I created on Google Sheets that takes your trace width as input, as well as the copper thickness, the hole's plating thickness, and some minima's as defined by your fab.

One key thing to consider is the plating thickness is much thinner than a typical 70 microns outer layer (2oz copper) and can go as low as 16 to 25 microns, requiring a relatively large drill diameter to get enough copper to match the cross-section of the trace.

Not the answer you're looking for? Browse other questions tagged pcb eaglecad pcb-fabrication via or ask your own question.

15
BGA escape via dimensions at 0.8mm pitch?
2
Correcting printed PCB (add a via)
5
PCB Design: What is the minimum value of Via Dia and Via Drill size?
1
Via drill size for heat dissipation
2
Parallel bus trace width and spacing
4
Eagle PCB change drill size of all vias of a specific size
0
Via drill layer static dimension in Eagle
0
Sizing Through-hole Vias for Power Traces
5
What are the risks of having a small annular ring?
2
Matching via sizes to trace widths