I released the smoke from oscillosope probes, how to repair?

I discovered that while my Siglent SDS1052DL oscilloscope has about a megohm of input impedance, the ground of each channel is actually common.

I accidentally connected a 12 volt, 25 amp power supply across through the ground of the scopes channels. The smoke came out of the ground clip on the oscilloscope probes. Both got hot enough to melt the insulation off the wire. The cable that leads out to the probe was not even warm to the touch. The rest of the probe appears fine.

I tested the oscilloscope against its 1 khz source that is on the front and both channels seem to work still. I am assuming whatever current path it took through the inside of the scope is actually very large in terms of conductor size, so the scope is probably fine.

Can I just heatshrink the wires on the probe ground clip to repair them? 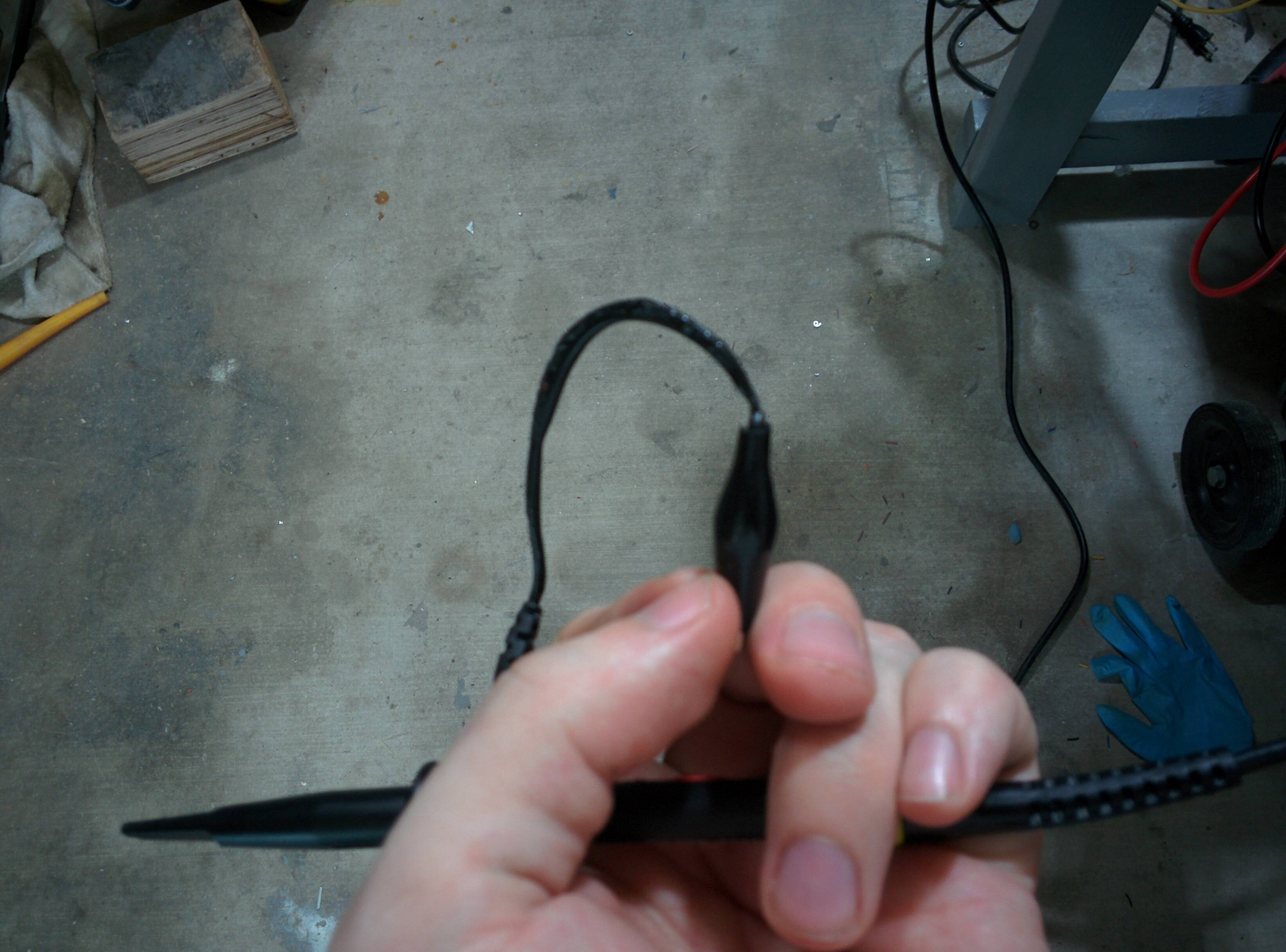 You should be safe repairing the wires and calling it a day.

When you connected the second ground alligator clip, you made a short at the supply output. The full 25A passed through your scope, but I doubt it was damaged, and I doubt the cables were damaged too.

Inside the scope there is at least a plane on the pcb dedicated to ground, it should be more than capable to carry that current for a limited period of time, at least.

Coax cables have a fairly thick shielding, which can carry some current without being damaged. I sometimes use them to power things with no problem. I am not sure of the current rating, I would guess less than 10A but not much less, so they can probably withstand 25A for a short time.

The weak point is the tiny cable that connects the probe to the alligator clip, and it fried.

You already tested your probes with the 1kHz source, if possible I would try some higher frequencies and I would check also that the measured voltage is ok, but I think it is very unlikely you made more damage than some molten plastic.

The damage to the insulation is pretty much purely cosmetic. You can either leave it as is, or heatshrink it, it's up to you. Alternatively you could get a new ground clip (they are generally quite cheap), but functionally there will be little difference.

The moral of the story is that ground clips should always be connected to the same potential. If you want to measure two completely independent signals with different ground potentials, you need a differential probe.

You seem to have gotten quite lucky, it is very easy to completely destroy an oscilloscope doing this.

8
Measure power supply ripple with Rigol DS1052E
5
Oscilloscope Probe Compensation Not working
9
Potential problems if I only ground one probe of my oscilloscope?
3
50Hz hum on oscilloscope probe only when using clip
1
When is it necessary to connect all scope probes to GND (instead of just one)?
6
Why is 30MHz Clock signal distorted on oscilloscope?
1
How to measure high frequency with an oscilloscope without loading circuit down too much?
0
Probing with oscilloscope fixes noisy circuit