What would be a simple circuit to monitor a 120 volt line current?

Connecting an Arduino to the circuit would allow one to detect when the attached device has shut down, for example a washer, dryer; or perhaps to monitor usage, a child's TV.

A CT consists of a single "turn" "winding" on a magnetic core with an N turn secondary. The 1 turn winding can be just a wire transiting the enclosed core centre. Many CTs are available with "split cores" which may be opened to allow the CT to be inserted over existing wiring.

A CT must ALWAYS be used with a terminating resistor so that the output current can produce an output voltage. Without this it will make very very very large voltages indeed. For 1:N transformer

If desired a CT can be used stand alone with very few other pars as an on/off current monitor.

Buy a CT here from Sparkfun 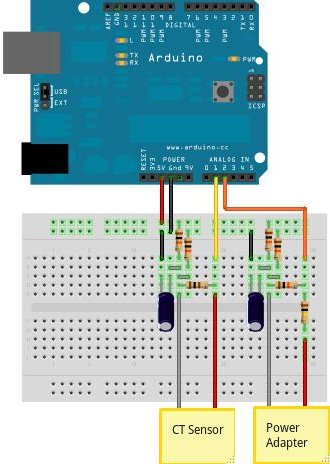 Probably the easiest to use is the i-Snail-VC-10: 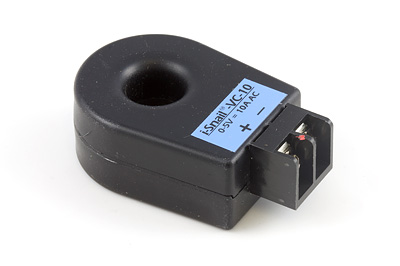 It's a current transformer with built-in electronics that give you 0-5V DC output for 0-10A AC. And it's self-powered, so you don't have to worry about that either. Connect it to an ADC input of the Arduino and you get a direct reading of the device's current. Drawback: it's expensive.

You can use a simple current transformer and add your own electronics. Russell already gave the equation 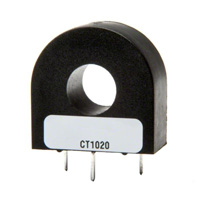 If we use the 5k\$\Omega\$ load we get \$2V_{PEAK}\$/A (the 1.42V is RMS). Feed that voltage over a 10k\$\Omega\$ resistor to a non-inverting opamp amplifier. If we use a single supply RRIO opamp we'll get automatically rectification: the negative half will be cut-off at the output. We'll just have to use a Schottky diode at the input to clamp negative input voltages to a safe level.

If you set the amplification to x10 you get \$5V_{PEAK}\$ for 500mV in, which means 250mA primary current. That's about the current you'll get on a 120V mains for a 30W load. Increasing the amplification will get you a higher sensitivity.

The opamp's output is a rectified sine. Use a peak detector (diode + capacitor) to get a DC voltage, and feed that to your Arduino.

An easy non invasive method could employ a split core current transformer. Essentially you put the coil around the AC power line and it produces a current porportional to the current in the line being measured. Put this current through a precision resistor and the voltage developed can be measured with an ADC.

Not the answer you're looking for? Browse other questions tagged arduino current-measurement voltage-measurement or ask your own question.

3
Reverse-engineering RF packets
0
Help with this “Make” tutorial
5
Efficiently sensing the voltage of a battery pack
3
Non-contact mains voltage measurement
0
How to combine LED and voltage divider
4
Interrupt Arduino if voltage is below some level or a switch which will not allow current to pass across if no sufficient voltage
1
Sense 230V - current
0
How to interface a passive inductance sensor output (audio-level signal) with Arduino?