I'm fascinated by zero voltage switching (ZVS) drivers. So I've been playing with simulations of them in Falstad.

switches switch-mode-power-supply zvs
Share
Improve this question
asked May 23 '16 at 17:08

I think the reason for the confusion is this isn't a true ZVS (Mazilli) driver, at least, not like one I've ever seen.

Typically a ZVS driver is like this, where a center-tapped transformer primary is used in conjunction with a capacitor as an LC oscillator. Clever connection of the nodes via mosfets means that the FETs drive the LC tank at its resonant frequency.

Note: you don't need to use a center tapped transformer, it is merely commonly done to step up the output at the secondary. There is no reliance on magnetic flux linkage and thus you could do this with discrete inductors. An additional aside: you'll often see a single inductor in series with the supply before current gets to the center tap. This is used as a choke to limit current spikes. 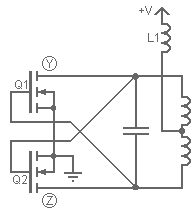 In your circuit you've attached, you only have an inductor on a single side of the oscillator circuit. It will still oscillate, but less effectively as only half the circuit is used over a full period.

With this in mind, we can now get to your questions...

How is oscillation initiated?

This is an interesting question and slightly amusing because typically when it comes to simulating oscillators like this, you have the opposite problem in being unable to get it to oscillate! In the circuit I've shown, it's perfectly symmetrical, and so oscillation only begins because of mismatch between real components. At the beginning of the simulation, both FETs should fight to turn on exactly the same. Normally you could solve this by making one resistor value a few ohms off or changing the VTH of one FET slightly differently (this is what you'll have in reality anyway), and hence one will "win" the initial race and start the oscillations. From there, the resonant LC tank will take over and whether they are perfectly matched or not, it resonates.

I'm not 100% sure without reading source code for Falstad but my guess is they impose some kind of initial conditions that the circuit is asymmetrical at startup and hence it works at all. Why yours fails to reset though, is beyond me.

However, I've modified the circuit to be as I explained I've typically seen these. 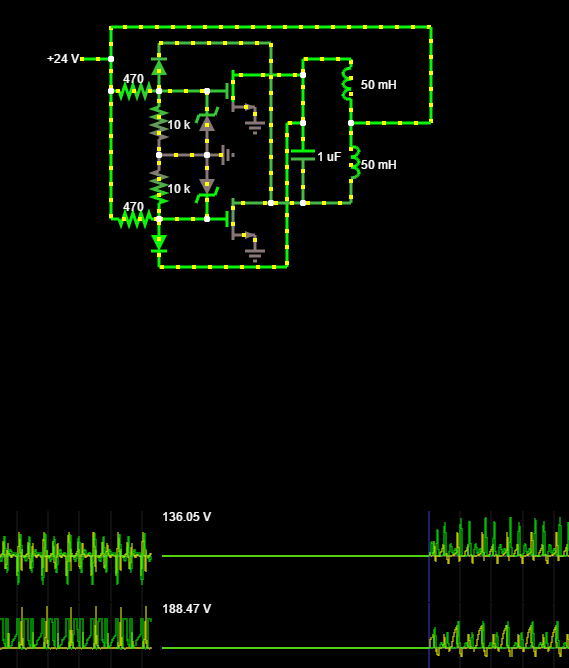 How does one size the inductor for balanced tuning?

You don't. The balancing of the circuit is by-design, simply by having a symmetrical circuit in the first place. This is fundamental to you having half the circuit missing. Yours will oscillate, but never evenly, because each half of the circuit is asymmetrical. It doesn't matter how you size your inductor with this topology.

In the traditional design, the inductance is used along with the capacitor to set the switching frequency, and this is the primary factor in choosing its value.

Hope that answers your questions and for more good reading, check out these links here and here.

Not the answer you're looking for? Browse other questions tagged switches switch-mode-power-supply zvs or ask your own question.