What does a motor driver do?

All I know on this topic is that connecting a microcontroller's power output to most motors will roast the microcontroller because of the high current. People say the solution is a motor driver. How does a motor driver work (let's use a servo motor driver in this case.) Does it, somehow generate it's own power somehow, or is it supplied power from a power source and?

Oh yeah, why can't I just supply any old 5v servo motor with the 5v output pin on the C.H.I.P computer?

Refer to the image below: 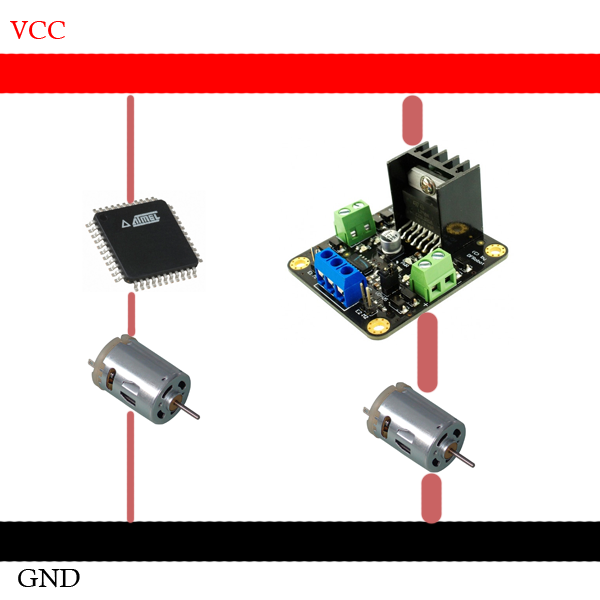 Your microcontroller and motor driver take power from main power rails (there might be two different power rails for both). However the need for motor driver arises because your micro-controller is not powerful enough. It has GPIO pins which can help you glow a couple of LEDs but they won't provide you enough current to drive a big motor.

In such cases, you need a motor driver. They are specifically built for this purpose. They take the power from power lines and dump into the motor. However they lack the brains.

Lets say you want to beat up a bully at your school but you don't have the muscles. So, you ask for support from the friend who spends his mornings and evenings at the gym doing some heavy lifting. However you still got to tell him who needs to be beaten and how much. You are micro-controller and gym friend is your motor driver. The bully is the motor.

Yes, it requires another supply which can handle the current requirement. A simple DC motor driver can be thought of as a kind of amplifier.

"Brushless DC", stepper, and various other sorts of motor with multiple windings are more complex, and sequence the power to the windings to achieve the right movements.

Classic 3-wire servos can have their PWM pin driven directly from a microcontroller, so long as the 5V power is from a suitable supply (your board may be suitable or it may not, it depends on maximum current requirement and supply). The PWM pin is a data signal and carries only trivial current.

Not the answer you're looking for? Browse other questions tagged motor driver servo or ask your own question.

2
What do I need to drive a servo motor?
2
Leaving a RC servo motor idle for long term?
1
control four motors with Motor Driver 1A Dual TB6612FNG
0
what motor driver for servo motor?
0
TB6612FNG DC Motor Driver Low Current Problem
1
Half H-Bridge Driver
2
DC motor with motor driver included
0
What does this mean in the datasheet for PWM motor control?