I'm back with yet another mystery.

How I got here: I'm in the middle of developing a sensor for use in the field. I'm trying to make this thing robust, so I've added diode clamps to all the inputs with access to the outside world. The diode clamps look like this (input is on the left side, and is fed into an xbee IO port): 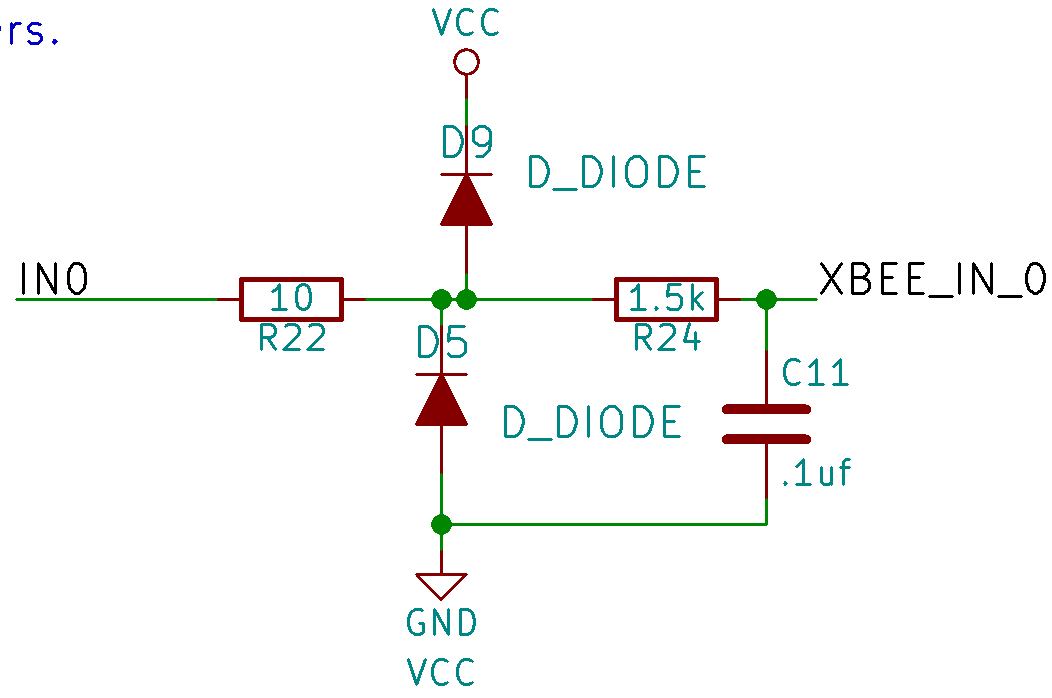 The system runs off of a solar source etc so I've got a switching regulator (LMR1403), cascaded onto an LDO (MCP1802) to run everything.

While performing my due-diligence and testing the voltage clamps, I noticed something odd: 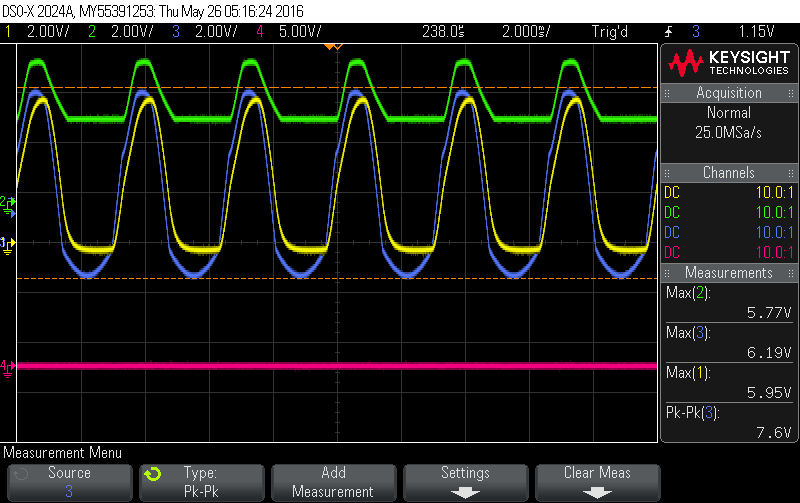 The test input that I sent into the circuit was "raising" the power rail, thereby causing the voltage clamp to fail (since the diode only holds the input to the rail). The test input was fed with a function generator, 1khz, varying amplitudes, but obviously amplitudes greater than 3.3v.

I simulated the circuit in LT Spice until I could recreate the problem. I used a similar LDO from LT instead of from MCP. I assumed (perhaps in arrogance?, but oh well) that most of the low-power LDO designs were fundamentally (hopefully) the same. Below is my simulation.

It seems that I've correlated at least 2 possible issues:

If I mess with either of those in simulation (make them too small, or rather "too big" for the load) I can cause very similar situations to occur. I checked with my circuit, and added more resistive load (circuit runs 30mA), and a MUCH larger output bank capacitor (I only had a 47uF ceramic on hand to swap out with the 1uF that was there) and both "solve" the problem at small input amplitudes, but both still fail for large inputs (20V p-p waves). The wave is properly rectified for the ground loop, but fails to be contained within the regulated 3.3v.

In an attempt to triple check everything, I patched in a bench supply to the 3.3v rail and it behaved in a similar manner.

So my question is basically this.

Many thanks. I am forever learning new things. Matt

Design Rev #2. I've thrown in a TVS diode for extreme spikes, then increased the value of R22 to limit the current intake through the circuit (thereby reducing the voltage raise). Here's what I've got now:

I'll adjust C1 accordingly for how fast a rise time I need on the signal. Thanks.

Any circuit that connects to field wiring of a significant length will be subject to induced voltages and transients. As you know you must protect your input circuitry from these, and the simple RC filter you have shown can be quite effective. For transient overvoltage the aim of the RC filter is to drop most of the transient voltage across R22, so R22 should be made as large possible without degrading the signal. How large depends on the impedance of the signal source and the input impedance (or input leakage) of the circuit you marked as XBEE_IN_O. I usually aim to get R22 between 10k and 47k. Depending on the signal, you may need to reduce the value of C1 so that your RC filter has the same time constant. If you increase the value of R22 this way then you do not need R24, or it can be 0 Ohms.

Another advantage of increasing the value of R22 is that if the diodes clamps have to conduct then the current dumped onto the VCC or GND lines is greatly reduced, so you should see not the VCC line being raised by overvoltage on the signal line.

Although a diode clamp can work quite well, you should realize that it presents a path for noise from you field wiring to your VCC supply and GND, which you should aim to keep as clean and noise free as possible. A better solution is to use the RC filter on the input to your circuity, but instead of diode clamps use a TVS on the input at IN0.

You may be able to eliminate R2 if the minimum draw from other circuitry is similar (a few hundred uA).

Or find a regulator that sinks current. Eg. LT1118

Not the answer you're looking for? Browse other questions tagged diodes input ldo circuit-protection stability or ask your own question.

3
LDO Regulator Overshoot
1
How do you choose whether to use a TVS, clamp the signal, or both?
1
TVS diode in LDO output
6
LDO with a bypass option?
1
Switching between power sources using a P-mosfet. Problem with LDO
0
How does diode clamp protection work?
0
Stable LDO voltage when Vin goes down momentarily
0
Microcontroller and LDO and +5V pull up sneak path