DHT21 / AM2301 sensor not measuring humidity

I am trying to use a DHT21 with a Lamobo R1 aka Banana PI R1 to read temperature and humidity, with Armbian/Jessie and a 4.5.2 kernel. A Lamobo R1 is basically an A20 board raspberry pi compatible, with an inverted compatible raspberry pi 2 bus.

I have setup it up in GPIO5, raspberry pin compatible 24, WirinPi 5, physical pin 18, according to a table here, plus the GND and +5V pins.

I tried to read the temperature and humidity with and without the recommended resistor. While the temperature is reading fine, and is also corroborated by a DS18b20 sensor connected to GPIO2, the humidity is always at 99.9%.

I have installed the WiringPi compatible library from WiringBP repository.

A custom kernel module for this chip, am2301 simply hangs the machine.

What I have found until now is:

Does anyone has anything else to add?

Additional notes as per comments:

As per the datasheet, the DHT21 timings are shorter with 3.3V and longer with 5V. I switched it from 5V to 3.3V and now it reads the humidity properly. It seems that while in the Arduino you have it at 5V, the software side/routines for the banana pi and raspberry are assuming it is connected at 3.3V.

From the software mentioned in the question, the fastest seems to be lol_dht22. I am using a slightly changed version of it (by myself), that creates files in /var/run aprox every 9-10 seconds to feed rpimonitor. 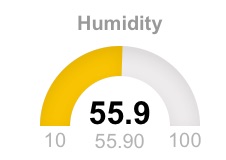 As @ChrisStratton correctly says, this method of bit banging/polling is highly prone to errors, especially when running in user land.

The simple protocol checksum implemented by the DHT21 is clearly not strong enough to weed out most of the errors/spikes (and there are many). I had to add simple software correction routines to ignore out of place values, and even then there are spikes.

The code for reading the DHT11/DHT21/DHT22 sensors is at my github https://github.com/ruyrybeyro/rdht .

I was also in doubt wether I would need to touch the R1 device tree configuration, as I did to configure the 1Wire protocol with another temperature sensor. It was not needed.

As an additional note, care must be taken when following blindly schematics online. While the Arduino bus operates at +5V, raspberry and compatibles operate at +3V; while apparently it is not the case of the DHT21 (I stress apparently as the R1 bus is more resilient than the rpi bus), feeding at random devices/sensors from +5V connected to an rpi bus can be potentially harmful to your SBC.

The measured temperature(s) also seems consistently to be higher +2 Celsius than what they should be, and these temperature inconsistencies are reported by many others using DHT21 devices.

Not the answer you're looking for? Browse other questions tagged sensor gpio arm7 or ask your own question.