What is the purpose of a buffer gate?

As I understand a buffer gate is the opposite of a NOT gate and does not change the input: 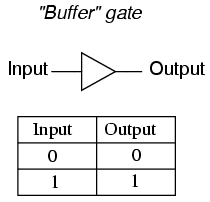 However I sometimes see buffer gate ICs used in circuits and to an inexperienced eye they seem to do nothing at all. For example recently I've seen a non-inverting buffer gate used at the output of an emitter follower, roughly something like this: 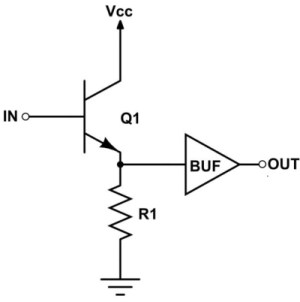 So when would one require to use a buffer IC in their circuit? What could be the purpose of the gate in the aforementioned schematic?

Buffers are used whenever you need... well... a buffer. As in the literal meaning of the word. They're used when you need to buffer the input from the output. There are countless ways to use a buffer. There are digital logic gate buffers, which are passthroughs logicwise, and there are analog buffers, which act as passthroughs but for an analog voltage. The latter is kind of outside the scope of your question, but if you're curious, look up 'voltage follower'.

So when or why would you use one? At least when the simplest and cheapest buffer of all, a copper wire/trace is readily available?

Here are a few reasons:

1. Logical Isolation. Most buffers have an ~OE pin or similar, an output enable pin. This allows you to turn any logic line into a tristate one. This is especially useful if you want to be able to connect or isolate two busses (with buffers both ways if needed), or maybe just a device. A buffer, being a buffer between those things, lets you do that.

2. Level Translation. Many buffers let the output side be powered from a different voltage than the input side. This has obvious uses for translating voltage levels.

3. Digitization/repeating/cleanup. Some buffers have hysteresis, so they can take a signal that is trying real hard to be digital, but just doesn't have very good rise times or isn't quite playing right with thresholds or whatever, and clean it up and turn it into a nice, sharp, clean-edged digital signal.

4. Physical Isolation You have to send a digital signal further than you like, things are noisy, and a buffer makes a great repeater. Instead of a GPIO pin on the receiving end having a foot of pcb trace connected to it, acting as an antenna, inductor, and capacitor and literally vomiting whatever the heck noise and awfulness it wants directly into that poor pin's gaping mouth, you use a buffer. Now the GPIO pin only sees the trace between it and the buffer, and the current loops are isolated. Heck, you can even properly terminate the signal now, like with a 50Ω resistor (or whatever), because you have a buffer on the transmit end too and can load them in ways you could never load a wimpy little µC pin.

5. Driving loads. Your digital input source is high impedance, too high to actually interface with the device you want to control. A common example might be an LED. So you use a buffer. You select one that can drive, say, a hefty 20mA easily, and you drive the LED with the buffer, instead of the logic signal directly.

Example: You want status indication LEDs on something like a I2C bus, but adding LEDs directly to the I2C lines would cause signaling issues. So you use a buffer.

Put another way, chips love exploding almost as much as they love semiconducting. And most of the time, when something goes wrong, chips explode. Without buffers, often whatever transient that is popping chips left and right will reach deep into your circuit and destroy a bunch of chips at once. Buffers can prevent that. I'm a big fan of the sacrificial buffer. If something is going to explode, I'd prefer it be a 50¢ buffer and not a $1000 FPGA.

Those are some of the most common reasons I could think of off the top of my head. I'm sure there are other situations, maybe you'll get more answers with more uses. I think everyone will agree that buffers are terribly useful, even if at first glance, they seem rather pointless.

Other than that, there is not many usages of it. That is why we don't find those easily, actually.

Buffers are used when needed to meet non-function requirements, often speed (or input / output impedance, which affects speed). An abstracted circuit often doesn't show enough detail to appreciate this need. In your circuit, R1 might be too high to drive whatever is connected to the output to low in a quick and reliable way.

Another reason might be that the buffer contains output protection (current limiting, ESD protection).

Not the answer you're looking for? Browse other questions tagged logic-gates buffer or ask your own question.

0
What is the triangle symbol in circuit diagrams?
2
How to increase fanout of CMOS buffer
0
Daisy-chain SPI modules current consideration

2
Buffering/matching large signal to drive 5 ohm capacitive load at 13MHz (RF)
1
Trouble splitting off LFO signal to drive LED
2
MOSFET voltage follower for non-inverting op-amp biasing
15
What is the purpose of an AND gate with the same signal on both inputs?
0
Buffer gate purpose?
1
Voltage Follower - OPAMP
2
Working of JFET as amplifier
0
A simple circuit of NOT using a buffer
2
Trying to use opamp to buffer BuckPuck control input - but it keeps blowing up