Why is the temperature range of industrial and military products so high?

From Wikipedia the common temperature range for electrical components is:

I can understand the lower part (-40°C and -55°C) as these temperatures do exist in cold countries like Canada or Russia, or at high altitudes, but the higher part (85°C or 125°C) is a bit confusing for some parts.

Transistors, capacitors, and resistors heating is very understandable, but some ICs have approximately constant low heat generation (like logic gates)

The maximum temperature the silicon experiences can be much more than ambient. 50 °C ambient certainly happens. That's only 122 °F. I've personally experienced that in the Kofa Wildlife refuge north of Yuma Arizona. You need to design to worst case, not wishful case. So let's say ambient can be 60 °C (140 °F).

That by itself isn't much of a problem, but you don't get that by itself. Take the same thermometer that reads 60 °C in open air and put it in a metal box sitting on the ground in the sun. It's going to get much hotter.

I once left a car parked at the Las Vegas airport for a few days. I had left one of those cheap "stick" ballpoint pens on the dashboard, partly sticking out over the side. When I got back the pen was bent at 90° over the lip of the dashboard. I don't know what temperature such pens melt at, but clearly it gets a lot hotter than ambient under common enough conditions in a enclosed box.

If you left some cheap piece of consumer electronics on the dashboard in the sun and it didn't work, you'd probably be a little irritated, then toss it and replace it. If the controller for your oil pump stopped working in the summer because it got too hot, you'd lose a lot of money, be pretty upset, and probably buy the replacement from a different company that takes quality more seriously. If your missile defense system stopped working because you deployed it in the desert of Iraq instead of some nice comfy test range in Massachusetts where it was developed, you'd be dead. The procurement officers that don't get fired will be extra careful to require all electronics to work at high temperature, and insist it get tested under those conditions.

First of all, military equipment is expensive. You can afford to actually test things for high temperatures only if your customer is willing to pay. Military customers tend to have budgets that normal people can only dream of.

Then, obviously, if you put an IC into a missile, you might not want that thing to fail if your missile gets hot from its burning end or from its air-frictioning end. Same goes for things that might be put in a satellite, intercontinental rocket etc: as soon as you hit space, and are in the shadow of earth, things can get really cold. Military and Aerospace (which typically are mostly the same companies) are the typical place where you'd expect a device to withstand a lot of G of acceleration, be hot-cold-hot-cold-hot within seconds, still need to be extremely well integrated and lightweight, and where costs just don't really matter much compared to risk:

The main difference (aside from how temperature management is done physically), though, is simply that these three groups of applications do a different kind of risk assessment:

Military (and aerospace in general) equipment is often:

It is not unusual to have a card edge temperature requirement of 85C for short periods (30 minutes typically) and it does not take much processor (to name but one device type) activity to raise the junction temperature to 120C or more.

In summary, military and aerospace environments are really harsh (as are down hole applications incidentally).

As noted by others, fully qualified military grade parts can be expensive (as much as 10x the cost of the commercial equivalent and in some cases more); in response to that some manufacturers have instituted screening programmes for plastic parts which still have a premium, but not as much as the previous solutions.

In response to the comment on card edge temperatures, here is a typical conduction cooled chassis: 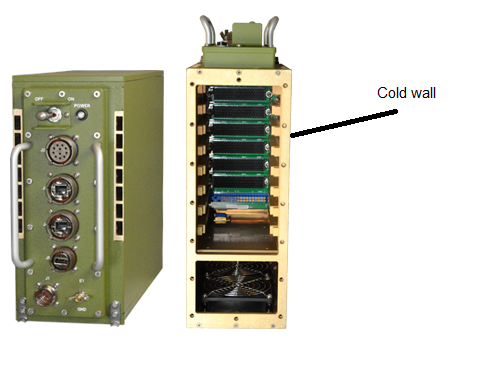 The outer part of the chassis is known as a cold wall (where we can know the temperature) and it may simply be metal or have other methods of maintaining a reasonably well known temperature.

Now here is a typical card, with heat ladders: 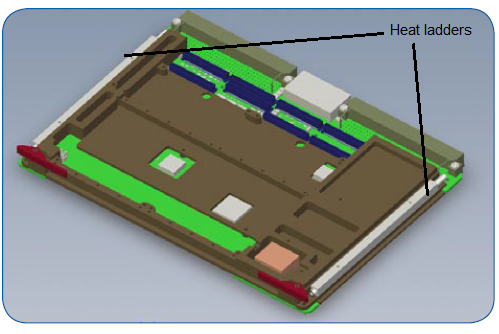 These are often made of aluminium (it is cheap and has decent thermal parameters) and the ladders are in contact with the side edges of the enclosure above; as there will be some heat differential between the outside and inside of the box, the temperature withstanding requirement for the PCB is set at this internal heat ladder, which is, as you can see at the card edge.

As the heat must get from the components to this point, it is not unusual for the PCB at a hot component (such as a processor or GPU) to get to 95C or more with a card edge temperature of 85C (which is often a specific requirement).

The thermal resistance of most flavours of FR-4 is \$0.4 \frac {W} {mK}\$ so lots of internal metal layers will exist in this type of card.

In some situations, we may need to use thermally clad PCBs which although expensive may be the only way of getting the heat out.

Several other comments and answers have mentioned that electronic circuits need to be in enclosures and their own heat production makes it hot in there. That has not been stressed enough. For industrial, commercial and automotive equipment, electronic circuits often need to be sealed up in tightly sealed enclosures to keep out all sorts of contaminants. In addition, higher power levels are common. There are a lot of motor controls, process heating controls and powerful actuators of various kinds. Micro controllers need to be able to operate in the same enclosures with that kind of equipment. In commercial buildings, motor controllers and micro controllers for heating ventilating and refrigeration equipment is often installed in rooftop enclosures that are not temperature controlled.

Common industrial equipment gets hot because of its own heat. A typical temperature rise inside an enclosure is 20-30 degrees C. If put in a building without air conditioner, the temperature easily goes towards 70-80 degrees, and sometimes even industrial range is not enough. In such cases all kinds of cooling are used: passive convection, forced convection, water cooling, etc.

Why are they so high? because the environment is high & not everything will be sat in a nice temperature controlled environment... Humans need it, electronics don't Take an aircraft... parts attached to the engine cowl will experience an ambient of 85C. At altitude parts of the fuselage will experience -55C.

It's all about burn-in testing. The silicon wafer has some defects when produced, and each element has to pass a final inspection. Therefore they have a so-called burn-in chamber for testing (I don't know for the existence of freeze-in, probably not needed) where different temperatures are set, according to the market destination.

In consumer, most of ICs survive also if there is a defect. In industrial, those with a large defective wafer will fail, in military burning room, those with just a small defect will fail.

So if you are lucky, you can get a consumer part that is good as military. I forgot to mention- the test is usually destructive for defective parts.

The answer to the main question is that the industrial and military products may actually experience the specified temperature range, and the users want to be assured that the products will not fail, if used within the given temperature range.

The answer to sub-question 1 is that there are two additional parameters that need to be considered: a)power dissipation, b) safety margin.
In order for a chip to be able to dissipate power, its ambient temperature should be 35C lower than its inside temperature. Also, one should allow a safety margin of 25C lower than the max temperature required. To account for these requirements, a product to be use with an ambient temperature of 50C needs to be able to work at no less than 110C (50 + 35 + 25). So, requiring components that operate at 125C, seems very reasonable.

The answer to sub-question 2 is no, you should not use commercial grade components, it leaves no margin of safety! You need to use industrial grade, or better.

The simple answer (on the hot side, which is where your question is focussed) which is at best tacked on to some of the existing answers is that device power dissipation can easily get the temperature of the device up to (or beyond) the rated temperature. The designers' job is to try and keep the device in a functional range; if the device is rated for 50C and operating in a 50C environment, it can't dissipate ANY power, so it can't actually operate without some active cooling system.

A 125C device in the same 50C has 75C of thermal headroom allowing power to be dissipated at whatever thermal resistance applies to the system.

Another reason is : because they can be!

For space applications they'ld surely like it higher (for a much lower temperature).

Edit because of unexplained downvote:

Maybe this answer was too short for somebody. Let me explain a bit more.

Here is a page giving some indications too.

Not the answer you're looking for? Browse other questions tagged temperature semiconductors reliability industrial or ask your own question.

29
Why aren't CPUs cooled from below as well as above?
4
What is the difference between Commercial and Industrial temperature range IC physical parts?
-1
What design changes are made for automotive or XT versions of chips?
0
Choosing industrial grade components after a consumer grade proof of concept