I'm just getting started with electronics (with Arduino) and have bought this SunFounder accelerometer with part code ADXL345 from Amazon. 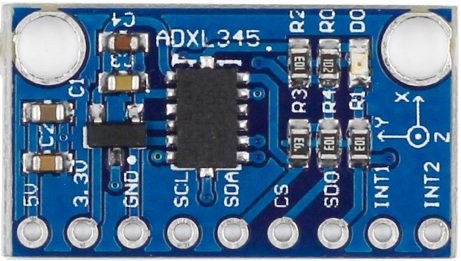 My problem is I can't find a datasheet anywhere from SunFounder for this part. I found this datasheet on SparkFun's website for an ADXL345, which seemed like it matched the part as the first few lines of the datasheet description matched exactly the description for the part description on Amazon ("The ADXL345 is a small, thin, low power, 3-axis accelerometer with high resolution (13-bit) measurement at up to ±16 g. Digital output data is formatted as 16-bit twos complement... etc")

But then I noticed that the pin layout diagram in the SparkFun datasheet doesn't match my part: 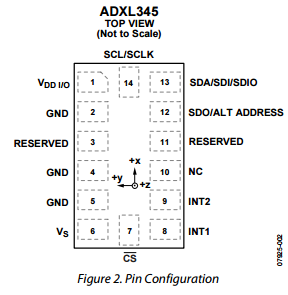 So my questions are (sorry, I'm really really new to electronics):

It looks to me like the wiring on the PCB matches the chip pinout that you show — why do you say that it does not?

In any case, ADXL345 is the part number of the chip itself, which is made by Analog Devices; get the datasheet from them.

It doesn't seem as though there's any documentation on the PCB itself, so it looks like you'll have to assume that the signal labels on its pads correspond to the pins with the same names on the chip. You may need to do some reverse-engineering to figure out exacly what all of the other parts they've added are doing. It looks like there's a 3-terminal regulator and some bypass capacitors on the left, and some pullup/pulldown/termination resistors and an LED for various signals on the right. This is why you should never buy a board that has no documentation.

Not the answer you're looking for? Browse other questions tagged components datasheet or ask your own question.

1
Why is the data output of some ICs in two's complement form?
18
Why are MAX-, AD-, LT- parts (among others) so expensive?
25
How reliable is it to use another manufacturer's datasheet of the same part?
0
Large differences between datasheets for the same part number
2
If Manufacturer spice model and Datasheet give different values which should I use?
0
How to convert accelerometer data into G with the ADXL345 digital accelerometer
4
ADS62P22 ADC output format
1
Looking for the part number of the button