How to measure high-voltage and high-frequency ripple?

I have a ferrite transformer outputting 1.2kV RMS on it's secondary. I have added a diode to do half-wave rectification, and have added a sufficient capacitor (10nF) in parallel to deal with ripple. It's more than enough, according to the formula \$dV = \frac{i}{fC}\$

I'm using 32kHz on the transformer, and I plan to draw at most 500 µA. This should give me a very small ripple.

However, to measure ripple, I tried using a 1000:1 high-voltage probe. It has 1GΩ impedance, and it's rated for 60Hz only. Measuring my rectified / filtered voltage shows a lot of gargabe and a huge ripple, around 800V, but I suspect this is false, given the probe's inability to deal with higher frequencies, probably.

I also tried a voltage divider using 10MΩ and 100kΩ regular 1/8W resistors and a regular scope probe on the 100kΩ resistor, but results are quite similar.

Changing the capacitor or removing it completely changes the ripple just a little, about 10% better or worse.

So, my question: is it normal to get false results with those probes (or voltage dividers) on high-frequency voltages?

Is there a safe and reliable way to measure ripple on this particular scenario?

Here is the distortion I got on the secondary, after rectification and filtering, to illustrate the question a little better: 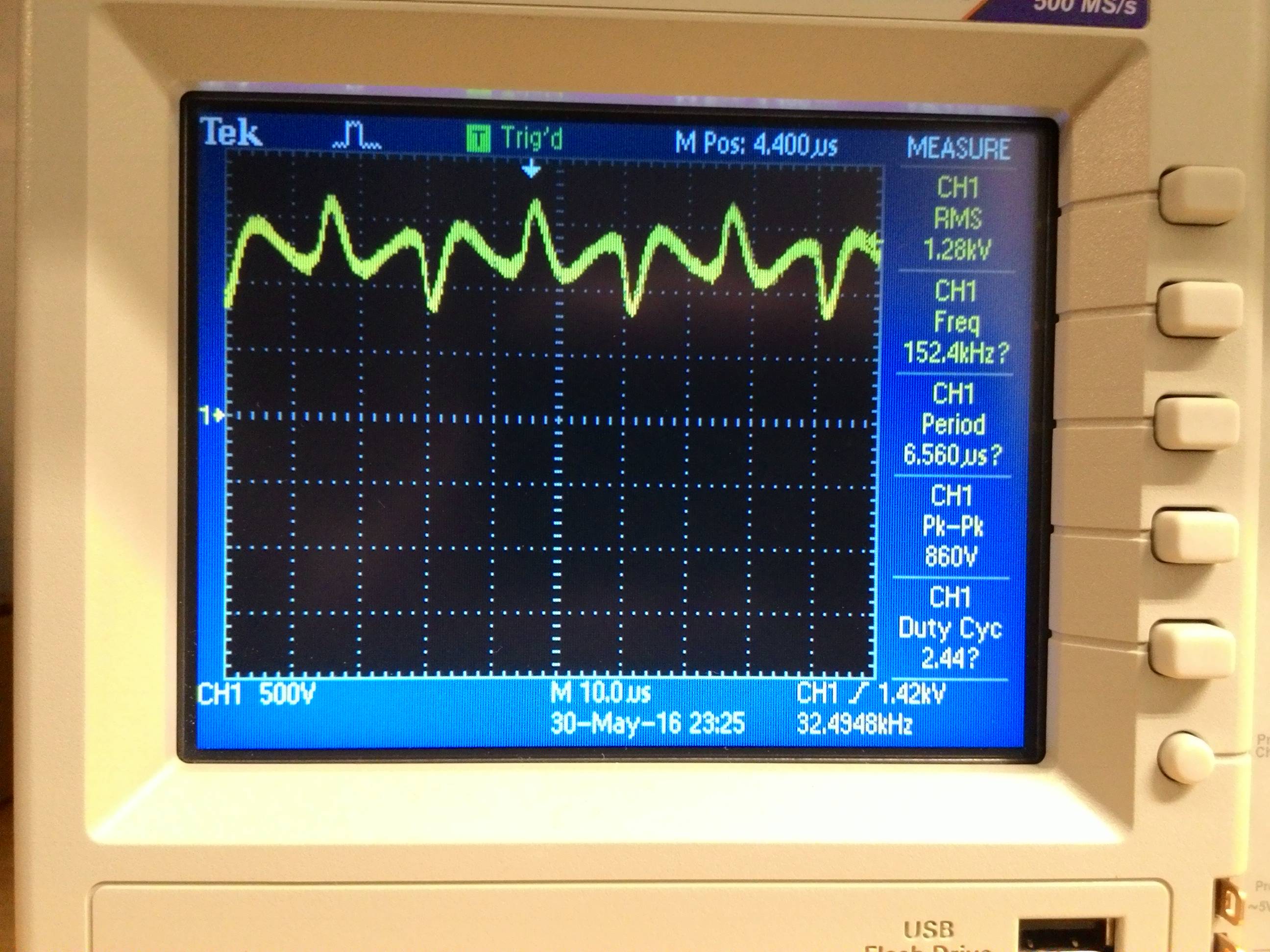 After reading the suggestions of everyone, I decided to do a test I didn't do before: I made another transformer, with a secondary of about 170V. That way I could use a regular 10x probe (without any voltage divider), and compare it's performance with the 1/1000 voltage divider, but keeping the 32kHz frequency. 170V is good because it's not too high for a 10x probe, but not too low for a 1000x divider.

Here's the result. First, the secondary after rectification and filtering, measured with the regular 1/10 probe. A very acceptable DC signal: 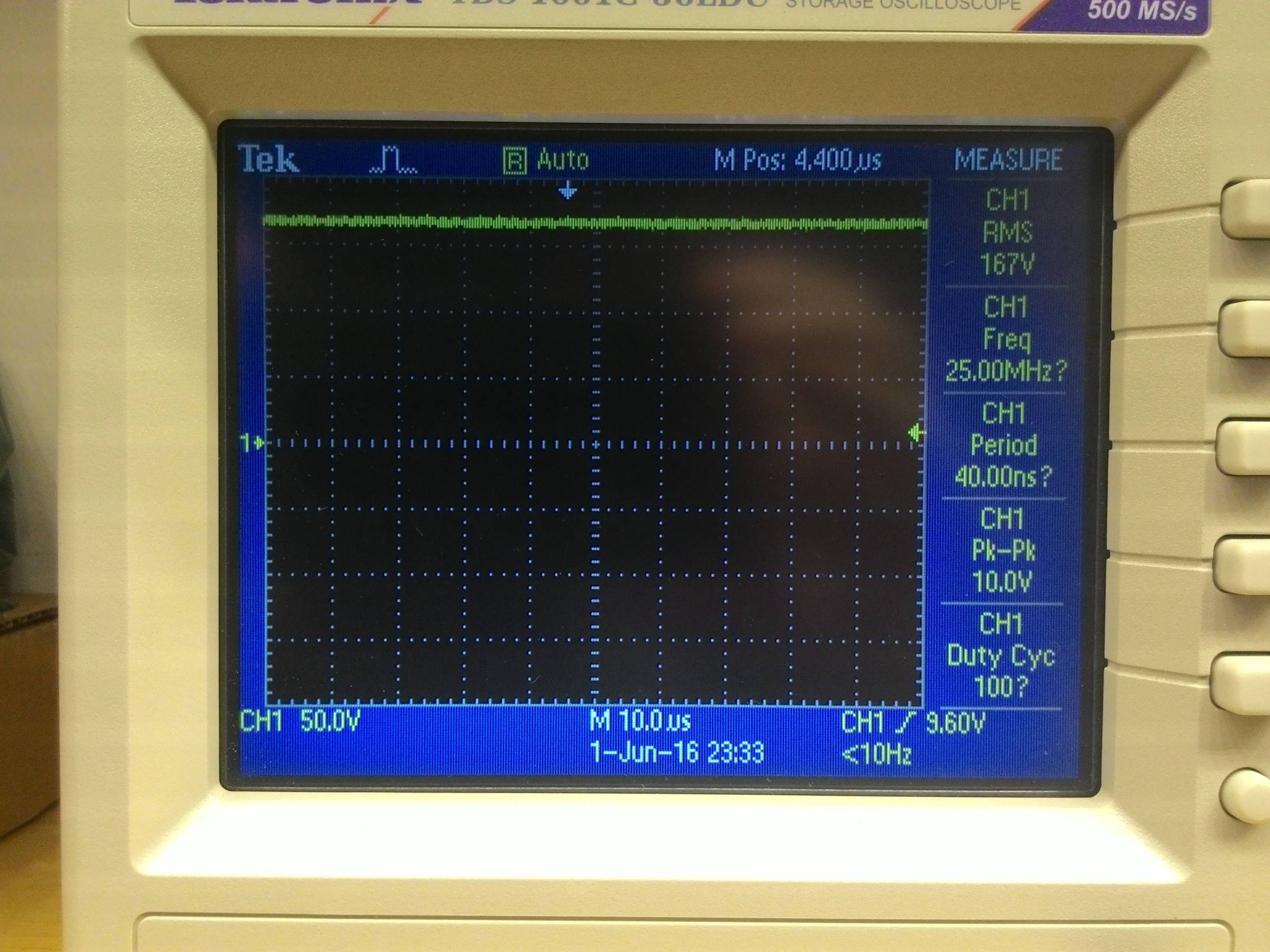 However, here's the same signal measured with the divider. If we ignore the heavy noise, we can see the same pattern seem on the first picture: 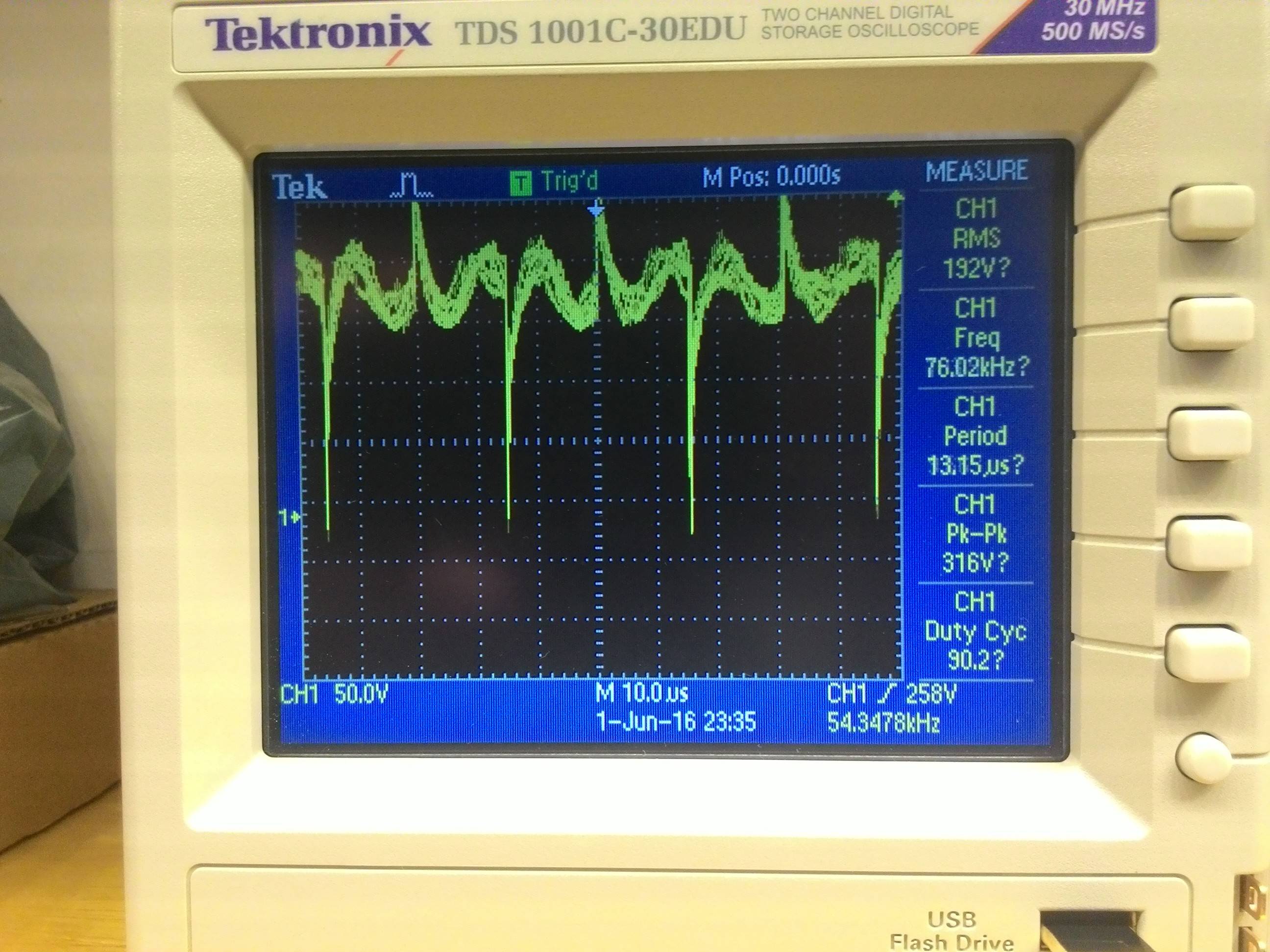 I don't know it this is the only problem with my circuit, but it's clear the measuring method is the biggest one. I will build a 1/1000 probe, using high voltage resistors and compensation capacitors shielded from noise. I can't rely on simple voltage dividers for this thing.

is it normal to get false results with those probes (or voltage dividers) on high-frequency voltages?

Yes, without a proper frequency compensation. It happens because resistors have small parasitic capacitance, which can be modelled as a capacitor in parallel with a resistor. These parasitic capacitors form a capacitive voltage divider for high-frequency signals. If the ratio of the parasitic divider differs from the ratio at DC, you will get wrong measurements, since the overall ratio becomes frequency-dependent.

Usually this is not a problem at kHz range. But not in the case of high voltage, which implies high-value resistors. The capacitance of a typical resistor is approximately 1.5 pF, which gives 3.3 MΩ at 32 kHz for a pure sine wave. Because you are using high-value resistors, the parasitic capacitance becomes the dominant factor even at kHz-range frequencies. If a signal is not a pure sine wave, i.e. it contains high-frequency harmonics, the parasitic capacitance dominates even more.

I'm not sure that the frequency compensation is the only problem; probably there are other issues related to a noise in the measurement circuit.

Also, typical 1/8W resistors are not suitable for 1.2 kV RMS. The maximum allowed voltage for such resistors does not exceed 100 V RMS, if I remember correctly. Consult the datasheet for the exact value. 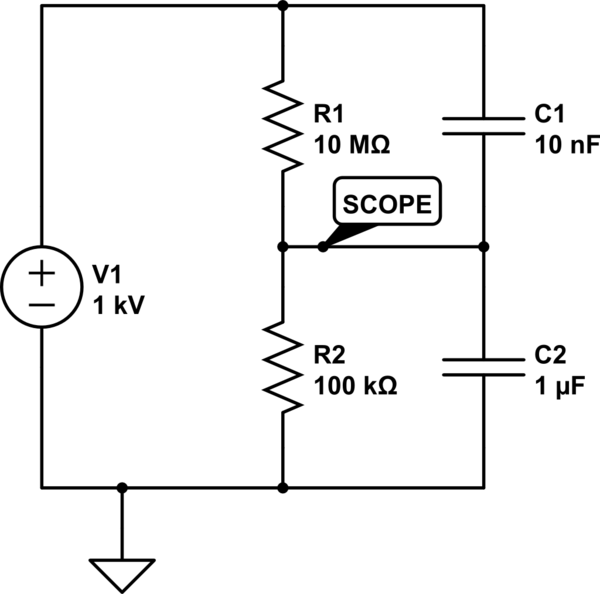 Your voltage dividers, assuming these resistors are safe for these voltages (yes, resistors have maximum operating voltages, too, simply because you can "arc" through/around them), should be correct. I don't see any reason why they shouldn't. 32kHz is really not that high, so parasitic effects (capacitance of the resistor and traces) should be pretty much irrelevant, and since you're not running a couple hundred meters of wire, you probably also don't have a significant radiation of power.

I'd thorougly measure all the individual signals involved here – is the current going into the low-voltage side of your transformer really shaped like you expect it? If you don't do the rectification, what does the output voltage look like?

Scope probes are easy to use but cant always be trusted .I use a capacitively coupled 1:1 high frequency pulse transformer .Then I run RG58U coax to the BNC connector on the scope .This means that I dont need to use the probe . I terminate the coax with 50 ohms when the scope does not have a 50 ohm button .The errors of scope probes are much worse on the 1:1 setting so people generally use the 10:1 setting .The pulse transformer setup is 1:1 so you have better measurement sensitivity and it is safer .

Not the answer you're looking for? Browse other questions tagged transformer high-voltage high-frequency ripple or ask your own question.