To keep it simple, would this schematic be appropriate (and have good results) for a headphone amp. Filters will be recalculated so don't mind little things in the schematic. The tube I am planning to use is ECC85 (very similar to 12AT7).

And.. would it amplify the sound without distortion? ( in some cases preamplifier acts more like de-amplifier (lowers the signal) when things are not 'balanced' ) 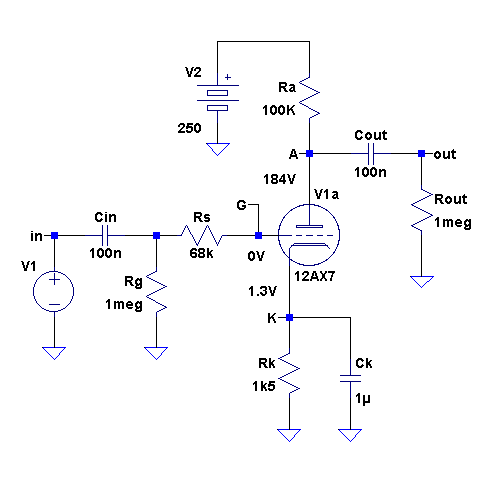 EDIT: I've got an idea. What if I output the sound from triode to an op-amp? (OPA2134) Would this work instead of putting a transformer to drive headphones?

All the values you've chosen are textbook values for a 12AX7 pre-amp stage, so the circuit will work.

The circuit by itself is non-linear because you have none to very little negative feedback. For small signals you'll probably won't notice during a listening test, but the distortion is there. If you like that kind of signal-distortion (many people do) is up to you.

The only way to find that out is to breadboard this circuit and give it a listening test.

Regarding distortion: If you want an as-less-distortion-as-possible amplification tubes are the worst choice. You can compensate the distortion but you'll end up with a circuit that won't sound much different than a 30 cent operational amplifier doing the same gain amplification.

Part of the reason why tubes are still being used in High-End Equipment is because they do distort, but in a pleasant way. With the values given in your schematic you'll also get more a kind of coloration instead if harsh distortion.

You've mentioned that the circuit should work as a headphone amp: The tube by itself won't be able to amplify and drive a headphone by itself. It's just a simple triode pre-amp stage after all. You will need a some kind of power amplifier to drive your headphones.

Figured I should post my solution to this problem. To control the gain (volume) of the circuit a simple variable resistor/potentiometer must be added before signal goes to the circuit. The reason why are we lowering the sound is because we don't want to clip the tube too much as the sound might not be as 'smooth' when it has too much distortions (harsh ones especially). So distortion problem is somewhat solved. (tubes give off some distortions naturally, we are trying to avoid only the harsh clipping which could easily happen with a song that has many powerful bass lines)

Now to really make the circuit work we must add an OP-AMP after the preamp. We don't want to add a cheap 0.3$ operational amplifier as it really might be the bottleneck in the quality here so OPA2134 is a great candidate here in my opinion.

I've chosen this circuit as an example: 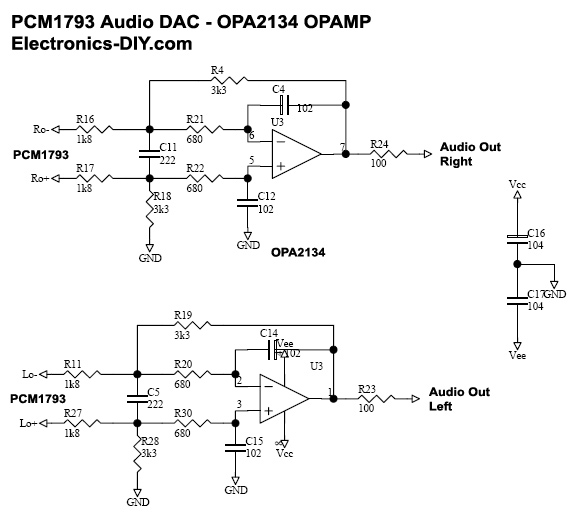 What's more - we can use the tube heaters power supply to drive this circuit (it will work great both with 6v and 12v) OPA2134 is a JFET OP-AMP meaning that it has JFET transistor inputs and they have very high input impedance which should match perfectly with tubes high impedance output.

So basically what we are doing is "isolating" the tube from being affected by headphones very low impedance and effectively boosting the signal and avoiding non-linear amplification.

Not the answer you're looking for? Browse other questions tagged amplifier audio vacuum-tube preamp headphones or ask your own question.