What is the schematic symbol for resettable fuses?

I have seen symbols for one shot fuses and circuit breakers, but not for resettable fuses which reset themselves when the fault goes away. What is the recommended schematic symbol to use?

The symbol for a PPTC (AKA Resettable Fuse) is:

Which is close to what I've seen, but NOT a standard per se.

This is actually a more difficult question than it would seem. This is because there are a variety of PTC (positive temperature coefficient) resistor devices.

For example this is a PTC fuse datasheet Bel PTC Fuse datasheet, and this Murata POSISTOR datasheet is a datasheet for other types of PTCs.

I believe it is important for the schematic to show as much about the circuit functionality as possible. The difference between fusing and current limiting is big. In the first case the circuit stops operating in the second it does not.

My understanding is that using the rectangle or the zig-zag for a resistor depends on which side of the Atlantic you are on. Putting a diagonal line across the resistor seems to be a common way to indicate a value change. A line with an arrow across a resistor is the common way to show an adjustable resistor -- typically mechanically adjustable.

The lines at the end of the diagonal appear to be used to indicate achieving an end state. Hence the other answer has a comment pointing out the difference between a PTC thermistor and PTC fuse symbol. The thermistor is not supposed to reach an end state of open circuit; the fuse does.

Thus the PTC fuse symbol is, as already answered:

While the other PTCs that do not go to an end state but rather limit current should the use a diagional line with only one horizontal line:

I like the indicating the direction of the temperature coefficient without using an initialism, which is tied to English, but I think it should be "\$+T^\circ\$" rather than with a lower case "t" to differentiate temperature from time.

I don't use these often so please let me know if I am incorrect. 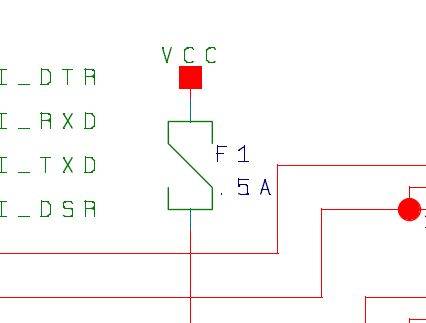 This is from one of my schematics. It's like a hard-edges version of a regular fuse.

On the level of abstraction a schematic deals with, a fuse is a fuse.

0
Unknown components in a schematics of a Micro-USB connection
0
Component Symbol identification; 2-pin rectangle with an N

26
Fuses: What are the practical differences between Ceramic and Glass cartridge fuses
1
Alternatives for automotive fuses?
33
Can thin sections of copper traces be used as fuses?
2
What fuses can I use for branch circuit protection above 600 amps?
0
What is the point of two fuses in series?
1
Precision resettable fuses
0
How to chose resettable fuse for 24 V DC to 5V DC converter?
4
Breaking capacity for fuses at mains inlet