I am trying to understand how voltage drop happens. From what I know, there should be about 0.7-0.6V drop across a silicon diode. This is exactly what happens when I remove the LED from this circuit. However, when LED is connected, each diode has about 0.2V drop. And the current across diodes is 10.7nA. I did this to see what the voltage would be on the node between R1 and LED. Let's call this NODE-1.

I considered 2 possibilities, first was having 1.6V on NODE-1 (which is what happened) and no voltage drop across each diode, meaning no current flow on them since 1.6V is not enough to forward bias every single diode. Second possibility was having about 6.3V-5.4V on NODE-1, enough voltage to supply 0.7-0.6 voltage drop for every single diode. In this case, since the drop across R1 is lower, meaning less current, the LED would be dimmer.

So my question is, why does the power supply only "consider" the 1.6V drop across the LED and sends current accordingly, instead of "considering" the 6.3V-5.4V drop across diodes? (which is what happens when you take the LED out of the circuit the circuit)

why does the power supply only "consider" the 1.6V drop across the LED and sends current accordingly

Note that power supplies don't "send current," instead they send voltage. The load resistor then "draws current" based on Ohm's law (or for diodes, based on the V-I curve.)

I think your confusion is caused by the concept "nonlinear resistance." Diodes don't actually turn on and off, instead they have nonlinear voltage/current behavior. Diodes don't behave as resistors, instead their current is determined by the applied voltage, and described by (oh no!) an exponential function. Because of the LED nonlinear resistance, even a simple LED with series-resistor isn't perfectly easy to understand.

Your circuit will be doubly-confusing because you're fighting two "nonlinear resistors" against each other: the LED's nonlinear curve, versus the nonlinear curve for the whole diode-chain. Nasty!

Here's one way to look at it. Suppose we slow things down by adding a large capacitor from NODE1 to GND, like 3,300uF. Next, when we suddenly connect the battery, the voltage on the capacitor starts rising. The capacitor voltage is also across the LED and the diodes. Eventually the voltage will arrive at the "fast rising" part of one of the diode graphs. In this case the LED arrives first (it's around 1.0V for red-color LEDs, higher for other colors.) The fast-rise part of the diode chain's voltage is around .4V for each diode, times nine, so roughly 3.6V, much larger than the LED volts. As the capacitor voltage rises, the LED "wins." The rising voltage will level out as soon as the resistor's Ohm's law behavior gives the same current as the V-I equation for the LED.

In other words, the diode-chain cannot draw significant current until your LED voltage goes above 3.6V!! This won't happen with a red LED and a 2.7K resistor.

However, if you'd used a white LED and a 100-ohm resistor, the diode-chain WILL draw significant current. If a white LED draws 30, 40, 50mA, the voltage can climb well above the usual 3V seen on white LEDs.

So, the answer to your question is different for different color LEDs!

In cases like these, the only way to make completely accurate predictions is unfortunately to abandon simplified mental models. Instead, write and solve equations. (This one has two exponential equations, one for the LED and another for the diode-chain.) Or, use a circuit simulator or Spice program which is invisibly solving equations for you in the background. Adding a capacitor and imagining slowly-changing conditions can take you far in grasping nonlinear electronics. But sometimes it's not obvious where that capacitor should be placed, or which nonlinear component will dominate. 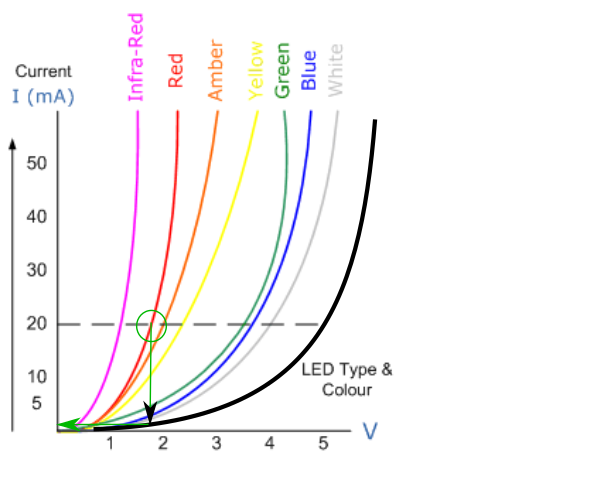 The chart of Figure 1 is a little rough but it should get the idea across. With your 2.7k series resistor max current will be about 3 mA. We won't be able to see this on the graph so I'm going to discuss the case when the LED is lit with 20 mA. 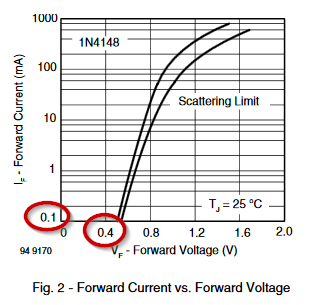 So my question is, why does the power supply only "consider" the 1.6V drop across the LED and sends current accordingly, instead of "considering" the 6.3V-5.4V drop across diodes (which is what happens when you take the LED out of the circuit the circuit)?

It's not the power supply considering anything. The LED hogs the current and as can be seen from the graph will cause the voltage to drop to 1.8 V. That's all the nine diodes have to forward bias them and, as the 1N4148 chart shows, you won't get much current through them at that voltage.

Because the LED is also a diode. And it behaves as such. When you put it in parallel to your long diode string, the current finds it simpler to go through the single LED (because the voltage drop is lower this way) and the other diodes see (almost) no current anymore. Hence there is (almost) no more voltage drop across them.

You can certainly get less than 0.7V across a silicon diode. If you simply apply 0.1V to the diode, then that is your drop. You can even apply a negative voltage, up to the reverse breakdown. If you apply -0.3V, then that's the drop. Both of these are less than 0.7.

Of course, very little current will flow if the voltage is between reverse breakdown and forward bias. That's what's happening in your circuit simulation; not enough forward voltage is applied to the diodes to produce forward bias.

Diodes aren't voltage sources. They don't magically produce a constant 0.7V when plugged into a circuit. They limit at approximately 0.7V; it's hard to coax them into having a greater forward drop: so much current is required in order to sustain a significantly larger forward drop than 0.7V that it will fry the diode.

Not the answer you're looking for? Browse other questions tagged voltage led current diodes or ask your own question.