I don't know a lot about electronics repairs, but I've got a relatively expensive laser mouse that got a frayed connection on the wire: 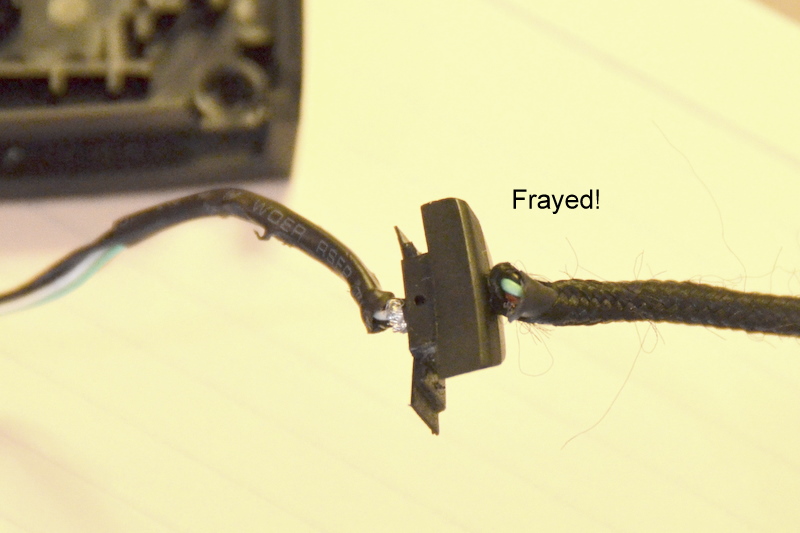 I'm wanting to repair it as it's out of warranty. I've cut the cable on either side of the "stopper", isolated each of the individual wires, and stripped the ends off in preparation for splicing.

I've read some instructions that indicate I should do an inline wrap and then apply some solder.

Is there a better way for wires this small?

Is there a particular type of heat shrink wrap I should put on this after it's spliced? Or will electrical tape suffice?

Inside the mouse, the cable is connected to a little plug. To me, it looks a lot like the fan plugs inside a PC. It's got 5 pins each 1mm apart. If there were a replacement plug I could buy and crimp the wires into, that'd be great!

I disagree with Chris in that you don't just want to shorten the cable. It's not the length of cable I'm worried about, but that tiny connector you don't want to replicate. The connector and the wires immediately coming out of it look to be intact. Replacing that will be a major pain in the butt, so I'd go to reasonable length to preserve that piece.

Since that piece is now short, you'll have to make a splice. Just realize up front you're not going to make a splice in such small cable that is anything like the size of the cable. The splice will be big, fat, and ugly in comparison. It looks like it can be made to serve as the strain relief too, so that helps a little.

To splice such tiny wires, see if you can sortof stick the stranded ends into each other. That may take some persuasion under a magnifying light, and then some weighty objects on your bench to hold them in place while you solder. This won't be easy, but it should be doable. If that just isn't practical, give up and bend each wire into a U and hook the two U ends together, flatten them together with a needlenose, then solder.

Once you have the connections made, wrap each one individually in a small piece of electrical tape, then wrap the whole bundle in electrical tape so that is looks like one fat section of cable. Like I said, big, fat, and ugly, but it should work. All that tape will act like a strain relief, so that section shouldn't break again.

As neat multi-wire splices are hard to make, I'd recommend that instead of splicing, you simply shorten the cable by discarding the inside piece and connect the outside end to the circuitry inside. Try to replicate the function of the strain relief somehow.

Has anyone tried using a metal sleeve and slipping the wire inside then applying heat to the sleeve? Solder will be drawn in like sweating copper pipe. The result should be a strong, straight connection, No larger than the diameter of the copper sleeve. You can even MAKE your own conducting glue from 1/2 graphite and 1/2 rubber glue and skip the solder.

2
Is it possibile to manually wire a displayport cable?
2
How to fix a broken sub connection and wire?
21
White hairs inside a headphones cable
1
Defining wire jumper inside IC in software
22
Extra bare wire in USB cable
0
What is the reasoning behind wire/cable sizing?
2
Splicing 24 awg wires - wire and tool selection
1
UART broken wire detection
1
Regarding Oil Type Material inside PVC wire