After metastability, does the value eventually settle to the correct value?

I'm confused about metastability. I know that metastability is the condition wherein the output of a flip flop becomes unpredictable (either high or low) for some "duration of time"... Okay, from this definition, it states that metastability will not go on forever, right? Does this mean that after this period, the output of the flop will eventually go to the correct value? Or does it go into an unpredictable value depending on which value has been generated after the metastable period???

So in the image below, the 2nd flop will not always samples a high value. Am I right?

If the first flop becomes metastable then after sometime the metastability has decayed, its value may settle randomly at either logic 0 or logic 1. Is this correct?... I'm asking this because the author says that it samples the value as high. I don't know how did it sample a high value. Is it just by chance that the output of the first flop settles at logic 1?

If the first flop did not go out from metastable state within one bclk period, then the second flop will also become metastable... and this could also happen when another stage of flop is connected... Is this what you mean that there is no guarantee that a Synchronizer will 'absolutely' give the correct intended output?

I'm reading some stuffs about metastability and synchronizers. I'm confused on the explanation of some of the authors, like this one. I'm reading this article, http://www.sunburst-design.com/papers/CummingsSNUG2008Boston_CDC.pdf on page 9. 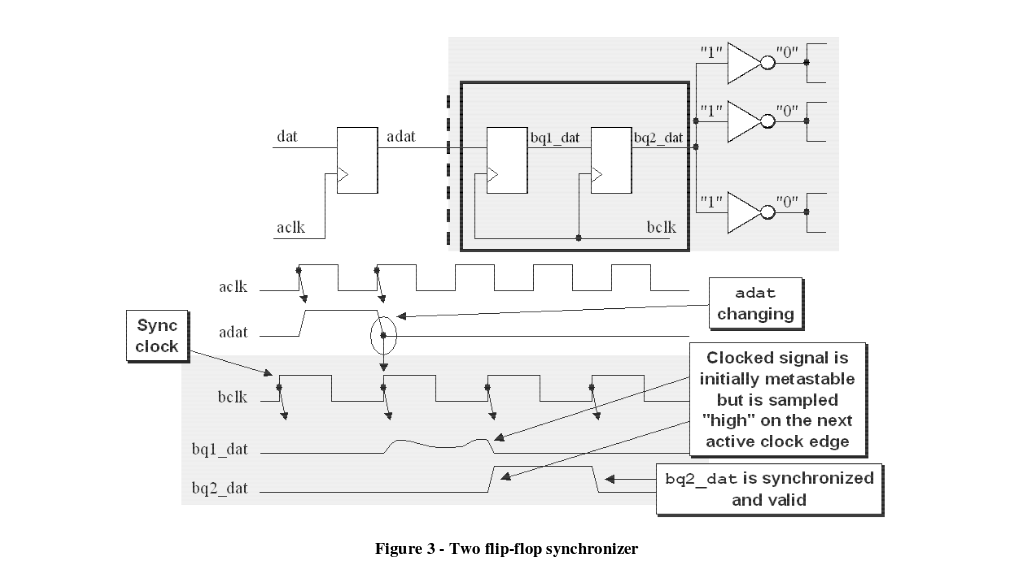 You have some misconceptions about metastability

1) You talk about AFTER the metastability period.

The whole point is that, although you can scope the waveform after the event, and figure out when things ended, the circuit, trying to do the decision job, at the time, has no way to 'observe' the whole waveform, it cannot look into the future. Circuits that try to overcome metastability by determining when it has ended, suffer from metastability in the 'has it ended' decision block.

Metastability only occurs when the correct result could be 1, could be 0, dosen't matter which, but has to be solidly one or the other.

For instance, an asynchronous interrupt arrives at a processor with a different clock to the one generating the interrupt. It doesn't matter whether the interrupt processes this cycle, or next cycle, as long as it does one or the other.

If it is important that the interrupt processes this cycle, then your interrupt has to meet the setup for the processor interrupt with respect to its clock. If it doesn't, you have a system design problem, not a metastability problem.

Metastability resolves itself exponentially. If the likelyhood of still being metastable after 1nS is (say) 1e-6, then after 2nS it will be 1e-12, and after 10nS it will be 1e-60. You will notice that this last probability is still not zero, but you are unlikely to see it in your lieftime, or indeed the age of the universe. If you did, you would be hard-pushed to repeat it!

So, if you wait long enough, metastability becomes too small a problem to be a practical problem. You MUST allow enough latency for that decision to be made.

But you may not wan to run your system clock slow enough. Pipelining! Just like you do with slow multipliers or execution control units. Spread the operation out over several serial execution units and run your clock quickly. The process 'wait' is just a D flop. Use a string of two or more D flops until you have waited the requisite time to reduce the effect of metastability to 'unlikely in the age of the universe'.

There are two ways to send a d-flop metastable. The first is by violating the setup/hold input timing requirements. The second is by violating the logic levels. The first will typically happen when an event generated in a different clock domain arrives at a clocked input, the first flip flop of a synchroniser. As the clock domains are different, here is no guarrantee that timing requirements will be met, and a fast data edge can occur at the same time as the clock signal. The second will typically happen between the first and second flops in a synchrnoiser, if the first flop has been sent metastable, and is generating an intermediate logic level out. This may be read as 0 or 1 by the following flop, or may send that metastable as well.

Think of a synchroniser as being asked to make a decision of whether the 0 to 1 data transition occurred first, or the clock. If the clock, the output is 0. If the data transition, the output is 1. A d-flop that is in the process of latching is an amplifier, with positive feedback. As an amplifier, made from real transistors, it has a bandwidth. You can see what happens to the setup and hold times in a datasheet for cmos d-flops as the supply voltage changes, and as a result their bandwidth changes. Larger bandwidth can resolve smaller setup and hold times. But, as the data edge approaches, and then crosses through the timing of the clock edge, the time difference becomes infinitessimal, and so the bandwidth required to make the decision becomes infinite. You cannot have an infinite bandwidth amplifier, and a finite bandwidth amplifier cannot guarantee to make the decision in any finite time. Metastability. But the longer you wait, the exponentially more likely it is to have made a decision. But not guaranteed.

If the flip flop is sampling an input signal -- e.g. a D flip-flop and the 'D' input is changing at the same time as the clock, then the correct slew is indeterminate -- there is no 'correct value' -- either value is correct.

Now -- in practice, the output will settle to a value; because the metastable flop-flop is a high gain circuit starting from an unstable equilibrium point, the settling is achieved exponentially -- as the signal deviates from the balance point, it changes faster and faster. The time to settle to a stable state is best described statistically -- e.g say 90 % of the time it will settle within 2 ns; 99 % within 3 ns; 99.999 % within 5 ns etc.

As I remember from an experience executed at my university in 1995, the flip flop does not settle to a known value. Also the duration of the metastability follows a statistical expression and can take a very long time.

Metastability implies that the FF circuit is in a linear operation mode (rather than a saturated operation) where it is kind of stable (=metastable) in between the extreme states. Sufficient noise can then make it go either up or down.

You can compare this to a teeterboard (paradigm). It is stable when either side is down, but you can put it in a metastable state when you carefully balance the teeterboard horizontally. The slightest disturbance will make it go either way. It could stay horizontal for a long time, but it really depends on "noise" like wind, vibrations, bypassers, etc.

With FFs, it is assumed in practice that clocking the same "slower" asynchronous signal in two sequential FFs will avoid metastability. But there is a formula indicating the probability that the FF is still metastable on the n-th clock. How you actually handle it depends how critical the application is. You can clock the signal many times until you reach an acceptable level of failure which is statistically inevitable but can be extremely low.

3
Do Schmitt-trigger specs give requirements to avoid metastability?
1
Do any flip-flops use separate clock levels for "sample" and "propagate" events
5
Metastability error propagation with flip flop
11
How does 2-ff synchronizer ensure proper synchonization?
16
Why do cascading D-Flip Flops prevent metastability?
2
Clock domain cross and metastablilty problem
2
4-bit synchronous counter IC: Do I need to pre-synchronize the count enables? (Metastability?)
0
What is the difference between "2 synchronize" and "metastability"?