I have a project which uses a TI step down converter (LMZ14201) to buck an input voltage (up to 41V) down to a regulated 5V. Until now, I had successfully used an adjustable (regulated) DC power supply for testing. In that setup, the step down converter worked like a charm.

Today I proceeded to assembling the complete system (i.e. using a lithium-ion battery pack, 36V, as the input for the buck converter). For testing purposes, I further connected a switch between the positive rails of the buck input and the battery.

With nothing else changed, the buck converter failed (produced sparks coming from under the package; thermal/GND pad?) on the second time connecting the battery. What could be the issue here?

Could possible inrush current (caused by switching/input capacitors), paired with stray/parasitic inductance be the culprit here? If yes, a viable solution would be a series NTC current limiter. What other causes could this have, apart from random part failure?

UPDATE: This problem is reproducible. Changing the soft start delay to 10ms did not help either. I managed to capture the voltage transient at the battery terminal. The battery voltage is about 37V, but it seems to swing up to 50V as soon as the DCDC is connected to the battery. The absolute maximum rating of 43.5V is therefore not satisfied anymore. 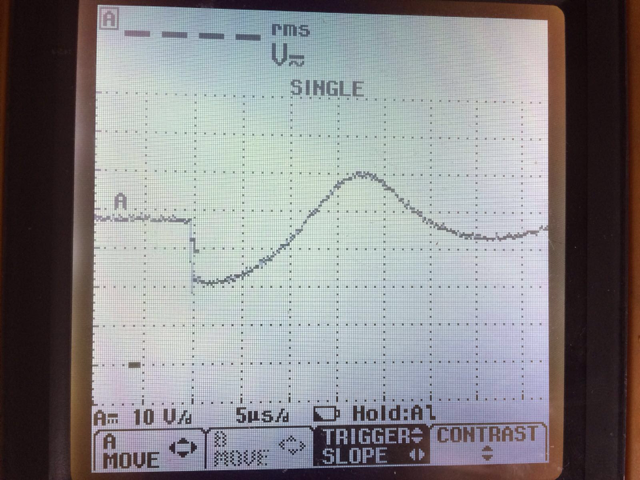 I understand why you see the initial fast droop, because the electrodes in the battery are quite complex electrically:

At the application of the load, an EDLC forms at the electrodes and the capacitance can be enormous - 60μF to 100μF is not unusual (the effective plates are literally Angstroms apart) with a sub milliohm ESR and that gives you a very effective differentiator at initial transient loading of the battery into a heavy load.

Once the EDLC has formed, it stops conducting and the only resistance is the ESR of the battery electrodes themselves. As the terminals recover to being limited only by load and internal ESR, there can be an inductive effect (after all, self inductance exists anywhere current flows, to a greater or lesser degree).

Your waveform looks like a damped resonance, so an appropriate snubber may work.

You can see how EDLCs form at battery electrodes in this paper.

I have seen this effect a few times and it was quite confusing the first time it appeared (in a seawater activated circuit).

The batteries can provide currents an order of magnitude higher than your bench supply. Possibly your bench supply was giving you a "soft start" by current limiting during startup. Did you implement the soft start? This is especially important when the power supply is under load at start-up.

Not the answer you're looking for? Browse other questions tagged dc-dc-converter buck failure or ask your own question.

2
Is it possible to run a Buck converter with rectified AC supply voltage?
3
Why is my DCDC getting fried when driving a stepper motor
0
BUCK converter considerations in a battery charger,with battery as a load
0
Do the wattage from connected devices need to add up with the given wattage from a step-down converter?
1
Dual Power Supply Build with Buck Converter
0
Powering several buck converters in series and parallel loading the outputs for extra current
6
USB-C Power Delivery with a buck converter
0
A question about DC-DC converter and buck converter
1
Creating a DC input ATX power supply using buck converter
0
Buck converter input voltage lower than the designed output voltage