The output of a current-output R-2R ladder must be connected to a virtual ground, such as the inverting input of an opamp whose non-inverting input is grounded. Call the feedback resisor RF.

It's easy to set these two equations equal to each other and solve for ROUT:

It really doesn't matter, though, since as we said before, this output node needs to be connected to a virtual ground, so ROUT is in parallel with an impedance that is effectively zero. It's actual value has no effect on the rest of the the circuit.

To use either a voltage output R2R DAC or a current output R2R DAC properly you have to use it in such a way that the output impedance of the DAC does not matter.

This circuit has an input impedance of almost zero ohms. It multiplies the input current by the value of Rf and that will appear at the output as a voltage.

If you do not use an R2R DAC as I explained, the output impedance will matter and errors will be introduced.

Usually you can get reasonably small errors if you make the load impedance of the R2R DAC significantly higher (for voltage output) or significantly lower (current output) than the resistors used in the network. So if the network has 100 kohm resistors, for a voltage R2R load it with 10 M ohm. For a current output load it with 1 k ohm (so a factor 100 larger/smaller).

But the opamp solutions are more accurate !

I think I should expand on what Fake Mustache said about low frequency / DC design for DACs:

You do not generally prefer the opamp output stage. This gets increasingly important with the bandwidth of the signal you want to generate.

The idea behind these devices is that the DAC sits on the motherboard, and you use interchangeable daughterboards to take the generated signal, and filter it, mix it up to some RF, amplify etc it. That means the signal has to travel a bit and cross a connector before it reaches the relevant analog circuitry. Here, the design choice was hence to use a current DAC.

The AD9777 DAC's analog outputs get directly fed into the daughterboard connector:

Then, on the daughterboard (let's talk about the WBX here, schematic): 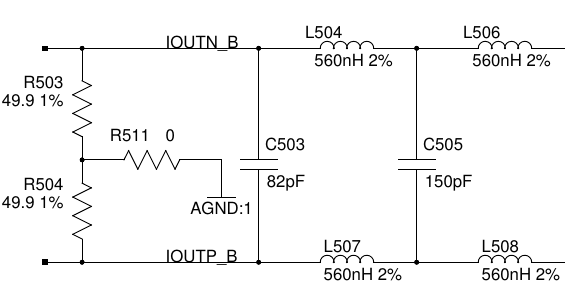 So, the DAC here runs at 100MS/s, which means that it's already wise to not think of the signal as "current flowing through a piece of metal", but to layout the differential lines from DAC to connector as microwave lines, i.e. microstrip etc, and commit to the fact that the fields around these conductors will carry the energy. In this scenario, capable opamps are hard to find, harder to get linear and even harder to get linear enough not to waste expensive DAC bits.

Of course, a DAC for these rates is specced with an output impedance that allows for correct transmission line impedance and termination impedance design. Which also means that for the 50 Ohm termination used here, Analog guarantees driving capabilities. From the AD9777 datasheet, p. 46:

hence, we're pretty much in the case where "ok, you've got a sink impedance in the range of 100Ω, but the source impedance is much much higher, so don't you worry". Of course, p. 47 also explains how you can use an Opamp as output buffer:

Yet the text mentions explicitly the disadvantages and design restrictions this has:

The common-mode (and second-order distortion) rejection of this configuration is typically determined by the resistor matching. The op amp used must operate from a dual supply since its output is approximately ±1.0 V. A high speed amplifier, such as the AD8021, capable of preserving the differential performance of the AD9777 while meeting other system level objectives (for example, cost, power) is recommended.

Since Opamps are never perfect, you infer a lot of additional problems. Just think about parasitic capacitance in the feedback line, inclucing the 500 Ohm resistor, or the fact that resistors and package pins have inductance, that change the phase of a signal depending on the signal's frequency... suddenly, your broadband DAC has a less-than-flat buffer, and changing that might not be trivial, lest you reduce the bandwidth to something manageable.

Not the answer you're looking for? Browse other questions tagged dac r2r or ask your own question.

4
Arduino audio output via R-2R DAC - biasing output for piezo speaker
0
Direction of DAC output current
0
R2R DAC in reverse
1
Please review my schematic design
7
How Significant is VGA Impedance Matching?
3
SAR ADC DAC Question
0
16 bit R2R DAC?
0
Can someone explain the mysterious non-behavior of the DAC0808 and DAC0832, is there a difference between them on the output side?