I have a few speakers that I salvaged from broken electronics and I plan on buying an amplifier board to drive the speakers. I'm currently looking at an amplifier such as this one and have sketched a diagram on how I believe it should be wired and powered as to not blow the speakers. I'm not sure if this is correct or if my calculations are entirely off. I appreciate any help and corrections you could provide.

Also, is there an ideal way to supply the 12V and 11V? I have an old pc psu and some adapters but I'm not sure if those are the best approach. 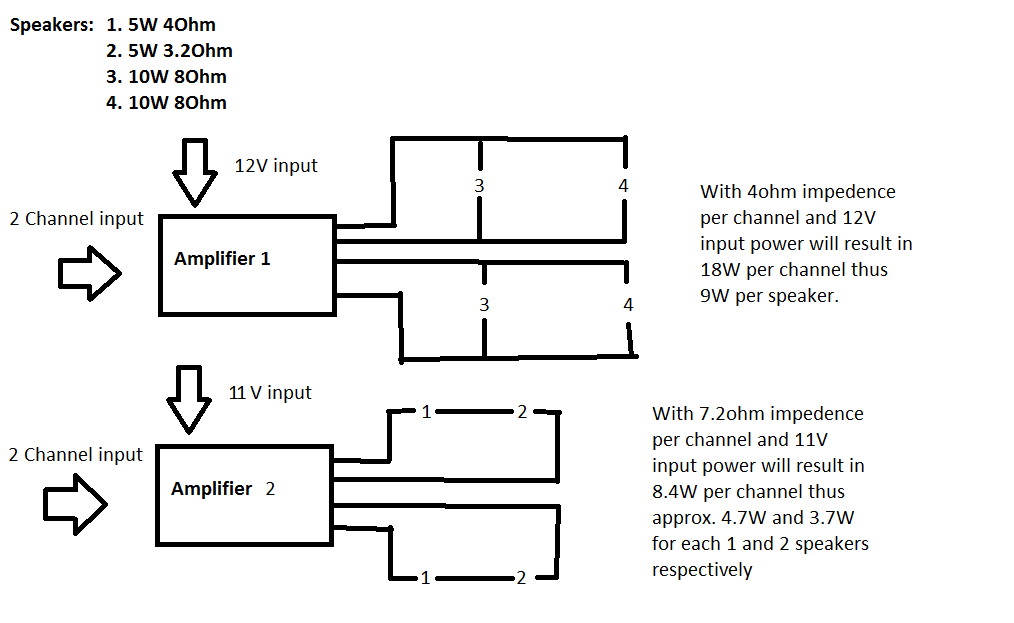 Supply 12V to both amplifiers, just on one don't turn the volume up as so far, or put a resisitive divider on the amplifier signal input.

if you are connecting the aplifiers to diffrerent sources the divider is not needed, just adjuste the volume control to suit.

to get full loudness it's going to want 50W or so of 12V. So a 3A or more "power brick" is indicated, but music power if often spiky so you may get acceptable performance with a smaller power supply. if you want to used the two amplifiers for different purposes using two powersupplies (one each) may be more convenient.

It is not clear what your goal is here? With such random, mis-matched speakers, you will not achieve uniform audio volume from each speaker. But we don't know if that is what you are trying to do?

Simply operate the amplifier (whichever one you choose) of your "nominal" 12V supply (which probably isn't exactly 12 volts, but it doesn't really matter which is why the working voltage is shown as "10-26V".)

Using mixed 4 ohm and 8 ohm speakers presents an awkward combination, but then the speakers are different anyway. It is what it is. There is little benefit to over-analyzing connecting some random, mis-matched speakers to a commodity ultra-cheap digital amp board.

First, your power calculations seem to be off by a factor of 2. The actual calculation for an amplifier is far more complicated but using the equivalent DC will give worst case scenario. V^2/R = W for the first case gives 144/4 per channel giving 36 watts. Then divided by two gives 18 watts per speaker absolutely worst case. In reality it's less than that.

Second, the link you provided shows that the amplifies are not 4ohm stable when using both channels in stereo.

These specs show that when using the chennels individually they are 8ohm stable. If you bridge the amplifier the it will sustain a single output that is 4ohm stable. (Bridging is only available on certain amplifiers, it is when the positive of one channel is connected to the negative of the other channel across a speaker. The amplifier is designed so that one channel drives the speaker normally through the positive terminal. The second channel drives the speaker with an inverted waveform but through the negative terminal.)

There are several problems with calculating amplifier power.

First, using DC for the calculation gives a wide ballpark. This is because the calculation is like connecting the input source directly across the speaker. In reality the speaker is driven by AC and will only see maximum input power at the greatest volume and for only the peak of a sine wave.

Second, sound is not a pure sine wave. It contains different frequencies and harmonics between 20Hz and 20kHz with varying amplitudes. This means that using calculations for RMS (pure sinewaves) is also not practical.

Third, speakers are an inductive load. This further complicates the power calculation because the speaker induces reactive power.

In your comment you wonder if the amplifier would regulate the power down. They won't. I've just scratched at the list of what needs accounted for when preforming the calculation. There are many more that easily account for the dependency.

7
building an audio amplifier for 2.5 ohm speakers
15
How are speakers matched with audio amplifiers? (avoiding overloading either)
0
MP3 Player: Disconnect 3-watt speaker from amplifier when headphones are plugged in using MOSFETS and the isolated switch on an SMD 3.5mm stereo jack
1
I have a .75 Watt/8 ohm speaker. Do I need to use an amplifier, what specs should I look for?
3
Repercussions of choosing a poor audio amplifier
1
Multi channel variable speaker design problem
0
How to route audio between different "groups" of speakers
0
How to balance resistance between speaker wires made of copper fabric?
6
Big capacitor on amplifier output