What would happen if I connect two different DC voltage sources in parallel?

I have a computer power supply that I'm hacking together as a bench supply. For this particular model to power on, I need a minimum load across both +5V and +12V.

"Easy," I thought, "I'll just connect both +5 and +12 to my power resistor!" And it worked, but then I started thinking, what does it mean to have these two different voltages connected in parallel? If the voltages were the same, then I would be increasing current. But what about different voltages?

Also, what if I connected +5 and +12 in series, and then put a load on that? The equivalent voltage would be +17V; what would be the difference between that and parallel?

Or am I going about this the wrong way; should I put a separate resistor on each rail? It seems like I can do better than that.

In general, a PC power supply isn't expected to operate in a redundant mode (i.e. with outputs tied together).

In industry parlance, this function is called OR-ing (not O-ring). If a power supply is designed with OR-ing in mind, there will be several additions to the circuitry:

These factors allow you to connect identical voltage rails together to provide load current beyond what a single supply can do, and allow for the rail to stay up (if the load can be delivered by N-1 units) if a single unit goes down. It also gives you some measure of protection if you accidentally connect a higher voltage to a lower voltage.

Also, most PC power supply returns are all tied to each other. There typically isn't an isolated output (independent return) available.

Now, the practical ramifications of your experiments:

Most likely you've back-biased the +5V and put 12V on some electrolytic capacitors that are probably only rated at 10V.

To add to what Majenko said, in the series configuration it doesn't work the way you expected either. That is because both supplies have a common ground. Series would only work to make 17V is both were independently floating, which they are not. It is not possible to connect two supplies with a common ground in series.

Whether series or parallel, either way is a REALLY BAD IDEA. 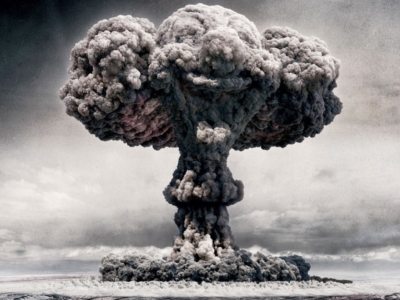 In parallel, your overall voltage would be +12V.

Your +5V feed will be being over-powered by +7V.

You will probably be doing damage to the internals of your power supply.

Especially if the +5V section is using capacitors that are rated at less than 12V... pop

With two switching supplies though, as W5V0 has noted, the resultant voltage will likely be the higher of the two, as the lower rail cannot sink current (due to the diode) and will effectively look high impedance to the 12V rail. So all that should happen (see below) is the lower rail will rise to the potential of the higher rail.

It is not a good idea to connect two different supply rails directly due to the problems that can be caused by low impedance sources opposing each other and circuitry of the lower rail may not rated to handle the voltage from the higher rail.
However in the switchers case it's probable no magic smoke will appear due to the inability to sink current mentioned above. However it's possible that the lower rails diode won't like being reverse biased so much and any capacitors may not be rated for the higher voltage (definitely a possibility given the extremely competitive price these things aim for - every cent makes a difference)
If a mid point voltage source is needed then a regulator of some sort can be used to provide a low impedance source.

The link you provide is for connecting batteries of the same voltage, which can be regarded as completely separate sources. The rails in your PSU will share a common ground (like two batteries with their negative terminals connected together) If you try and connect them in series it will effectively short one of the rails to ground which is not good.

It's not too clear what you are trying to do with the outputs without a schematic or some more info as to what voltages and control system (e.g. protection, voltage/current adjust, etc) you want to end up with. For the minimum load on each rail you just need to use two separate resistors to ground.

A separate load resistor on each supply voltage is the only correct way to get both the +5 and the +12 loaded. However, depending on the supply, it might suffice to load just the +5, since the +12 is usually reserved for disk drive motors.

I don't know what your electrical bench looks like, but in my situation I could find an old 4GB hard drive pretty easily and put it on as a dummy load. It might not be as portable as you're wanting, but it has served me in the past for a dummy load.

This is a circuit diagram of a computer power supply I added it to give you some help about your experiment:

Putting two power supplies of equal voltage together is not likely to result in a good distribution of current. Putting two power supplies of different voltage together is an even more terrible idea. Either the lower voltage supply shuts off (and is useless) or it sinks current. If it is designed to sink current, it will reduce the available current from the higher voltage supply. If it is not designed to sink current (and most will not), any number of bad things may happen.

It appears that you are willing to take the high risk of "blowing" your power supply, just to save a "pre-loading" resistor! Yes, you should use a preloading resistor, as required, for each rail. Yes, you can not do better than that.

The straightforward way is that (from basic electrical engineering circuit analysis by David Irwin) "a series connection of current sources or a parallel connection of voltage sources is forbidden unless the sources are pointing in the same direction and have exactly the same values."

Not the answer you're looking for? Browse other questions tagged power-supply dc parallel or ask your own question.