What is the more frequent error in DDR Memory?

this is about DDR memory data corruption and not about STUCK address or data lines. If we have a good DDR with no memory stuck issues and we perform lots of writes and reads which type of error is more prominent

Where can I get such statistics.

The most typical "soft" error in DRAM consists in the loss of charge by the bit capacitor. Capacitors which were not charged to begin with rarely get any charge from the thin air. Charged capacitors lose their charge naturally over time, and this process is accelerated by faulty gate transistors, cosmic rays switching such transistors to conductive state, and dielectric imperfections.

Whenever a charged capacitor represents logical 0 or 1 is defined by the DRAM implementation. First generations of DRAM had the capacitor tied to ground and used to represent logical 1 with a charged capacitor and logical zero by a discharged one, so typical errors manifested in ones turning into zeroes: 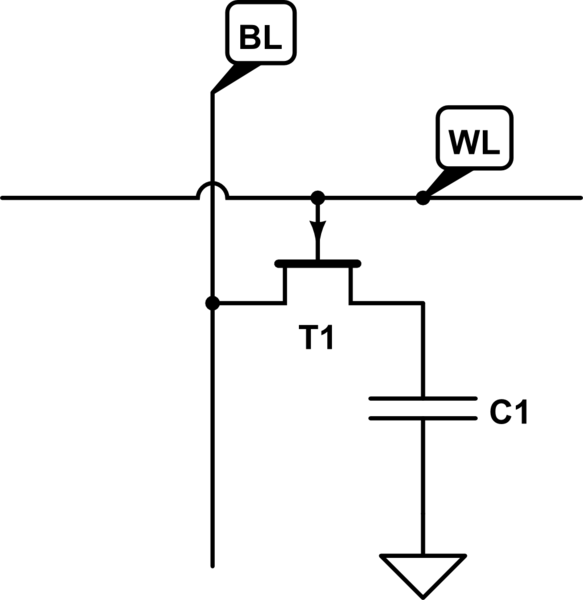 Modern DRAM is a bit different, with the capacitor being tied to VCC/2 potential instead of ground:

This make both 1->0 and 0->1 errors equally probable, at least among many DRAM chips. A particular DRAM chip can still have different probabilities for these errors if VCC/2 potential is consistently interpreted as either 0 or 1.

Not the answer you're looking for? Browse other questions tagged memory computers ddr ddr3 ddr2 or ask your own question.