Earlier today i changed the value of the shunt resistor of my LTC4150 coulomb counter from 0.05 ohm to 0.5 ohm to get more precise readings.In the datasheet it was specified that voltage drop of the shunt resistor should not be above 50mV for proper operation, with that in mind, i connected an appropriate resistor as my load to limit the current wihtin this restriction

Since my Vin is 7.4v i picked 10kΩ to be on the safe side and to test my expected, low current resolution.

Oddly enough the board stopped producing interrupts. It used to signal low everytime some amount of charge(Depending on shunt resistor and voltage to frequency gain)have passed and it still remained broken even after i reverted the resistor change i made earlier .After a series of unsuccessful repair attempts (i even changed the IC with a brand new one to no avail.), i decided to check the resistance value of each resistor on the board with the help of the product schematic. 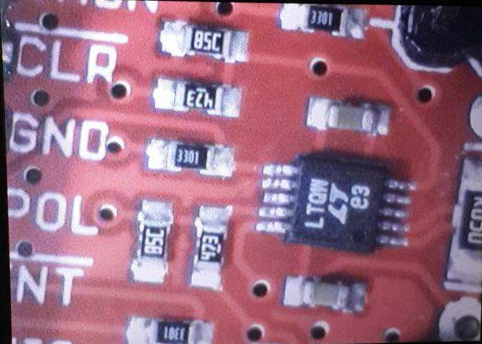 Edit : I removed the resistors from the circuit and it looks like they are not the cause of my problem.Interrupt pin of my IC is an open-drain output , its is supposed to provide me with a high signal whenever (which i will see as low since it's open drain) a certain amaount of charge has passed.Even after ı changed the IC still does not work. I am not asking for a direct solution but rather an approach to what to look for next in my troubleshooting scenario

While measuring components on the board keep in mind that there are different paths the current can flow. Take for example this schematic:

Trying to measure R1 may not give a value of 100 on a pcb, because the volt meter current has the potential to flow into other paths and this lowers the measured resistance from the volt meter. In this example putting DMM leads across R1 could result in current flowing through R1 AND through Rsensor to ground and through Radc (the resistance of an analog digital converter ), through R2 and back to the DMM leads across R1. Most IC's these days also have protection diodes that turn on when you try and make measurements with the circuit off. If you really need to verify a passives value, then unsold er it from the board and measure it. A continuity tests only looks for small amounts of current so the same rules apply, and you still have lots of potential paths in any given circuit because real world parts are not ideal and don't have infinite input impedance AND function differently with no power applied AND have protection diodes.

You appear to be using the demo board

If you have chosen 10k as the output load and not changed any other circuit element (particularly the current sense resistor, R4), then we get the following:

The interrupt hasn't stopped, you will simply have to wait just over 69 minutes to see one.

Since my solder heat was around 360 celcius and the fact that i am a newbie smd solderer i might have burnt the conductive roads. Or it was static electricity even though we had anti-static mat on the table. Either way it looks less painful to use my spare LTC4150 rather than fix the current one. Don't forget to check absolute maximum rating for soldering heat next time ! :)

Not the answer you're looking for? Browse other questions tagged resistors troubleshooting shunt or ask your own question.

0
Troubleshooting stepper motor drivers
0
How to calculate the feedback resistors for an SMPS
0
Troubleshooting Power Issue in Bernina 290 Foot Pedal
0
Sansui AU 6600 Amplifier restoration Power cement resistor tolerance
0
Why don't mass-produced LED chips burn out right away?
0
Why is this oscillating / Why is shunt voltage undershooting so much