A question about reactive power through a capacitor in LTspice

Before posing the question I would like to write the assumption I make for the power concept in passive circuits. As far as I know the power dissipated in an RLC circuit is the active power which is actually only dissipated through the resistor R. Power through L and C components are associated with reactive power which means they in average do not dissipate power, they absorb and give back the energy to the circuit continuously.

If the above is true, then I assume a simulation should indicate the average power through an inductor or a capacitor as zero.

Here is a simulation for inductor case where the input is a periodic pulse (plot shows the power through the inductor): 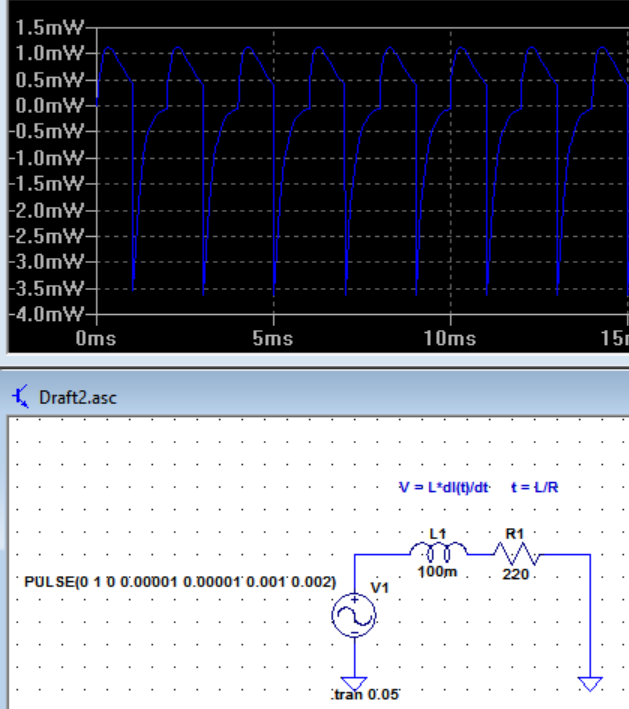 It seems the integral of the above plot with time is zero.

But below in capacitor case I don't get the expected plot: 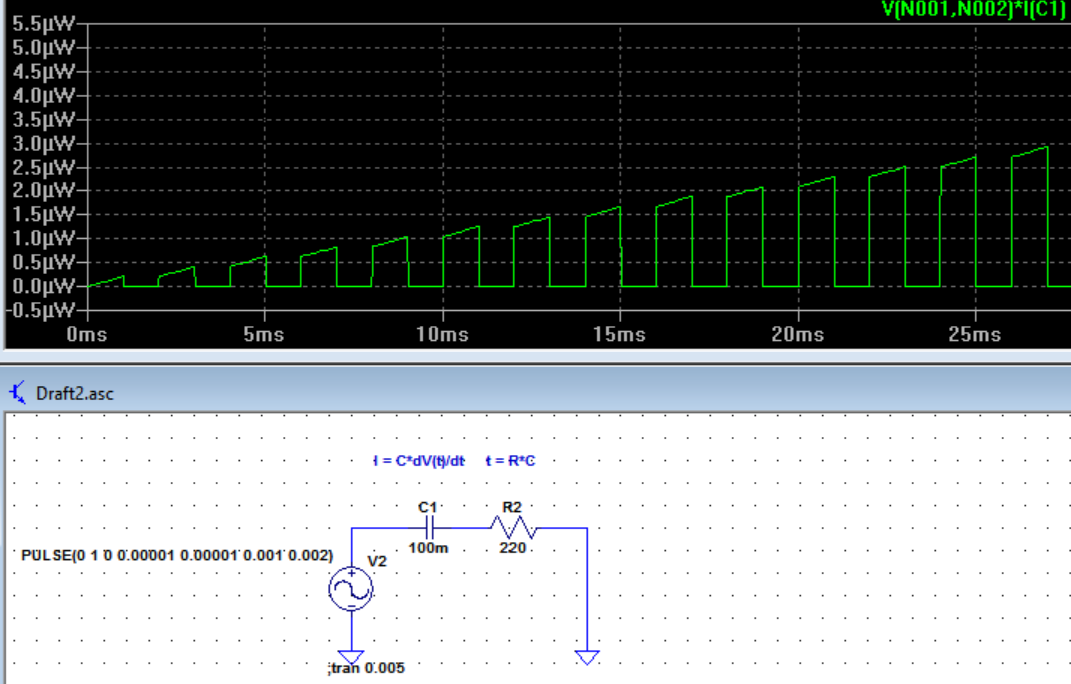 In this case the integral of the above power plot with time is non-zero. And it is increasing.

Why in the capacitor case the average power is non-zero unlike in inductor case in this LTspice simulation?

EDIT: Below is the input signal asked as request: 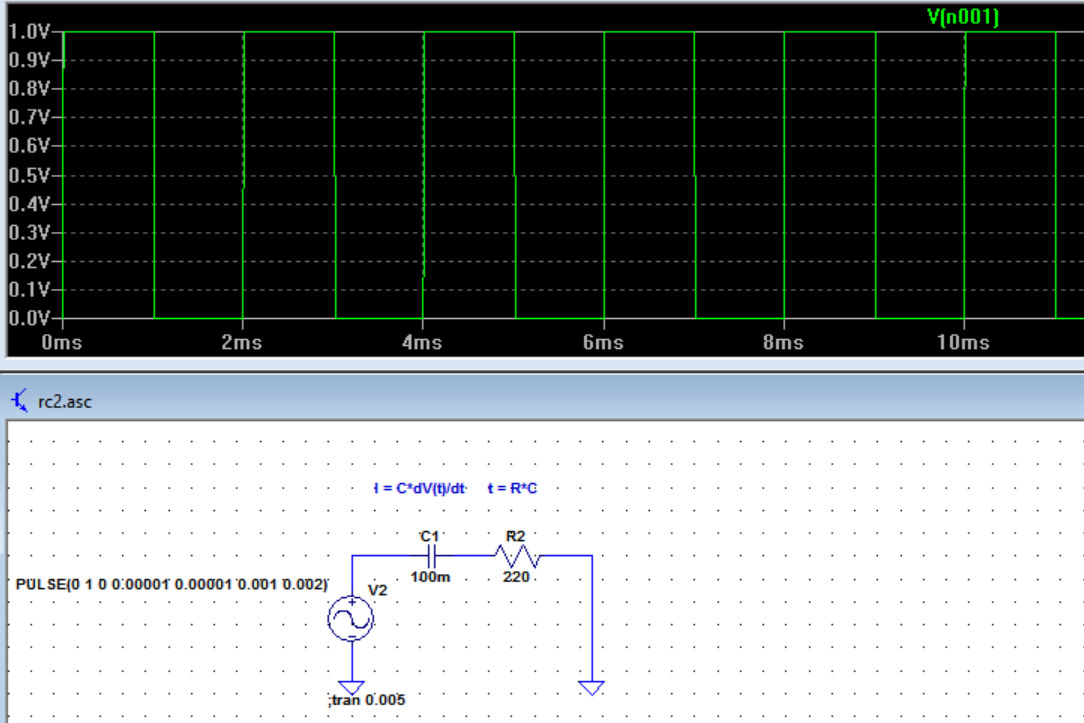 Here are the settings: 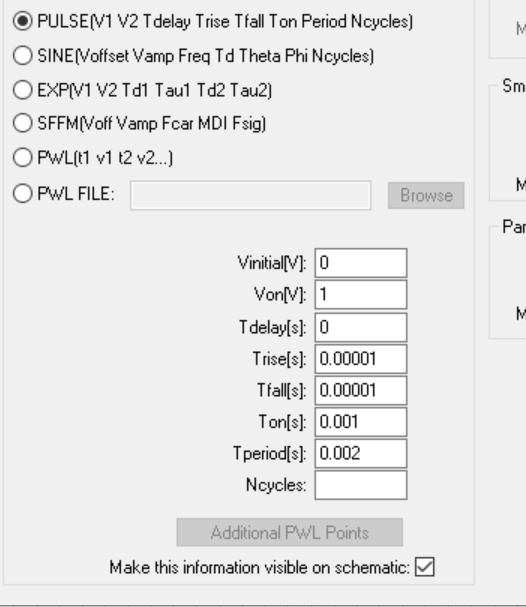 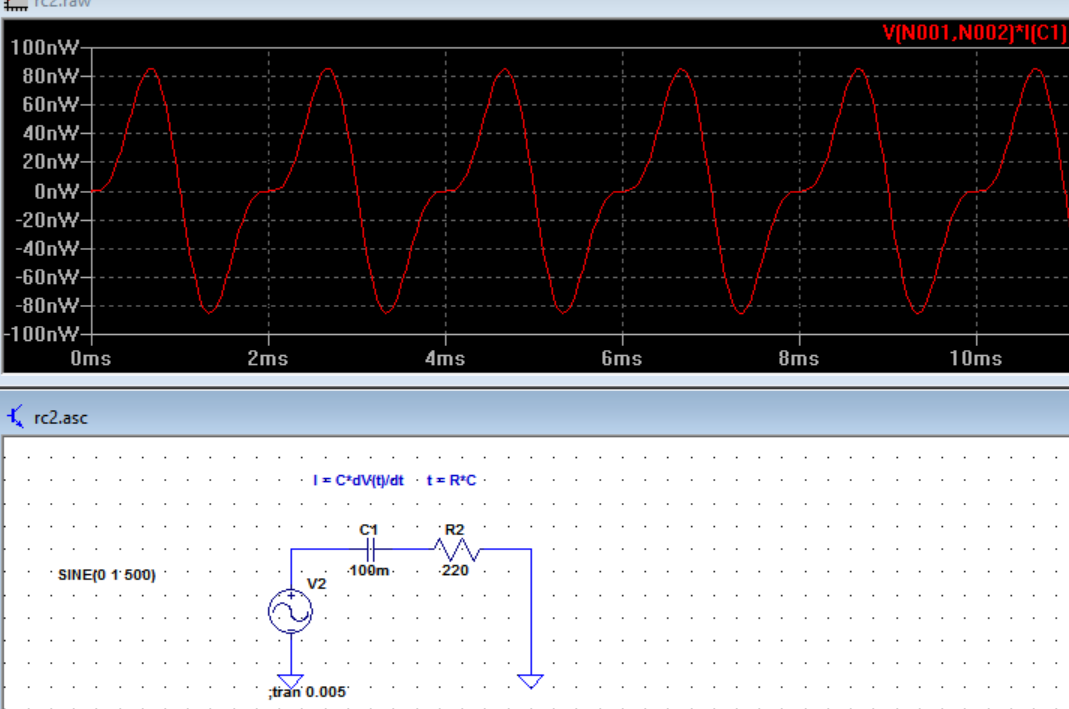 And a zoom section from the steady-state: 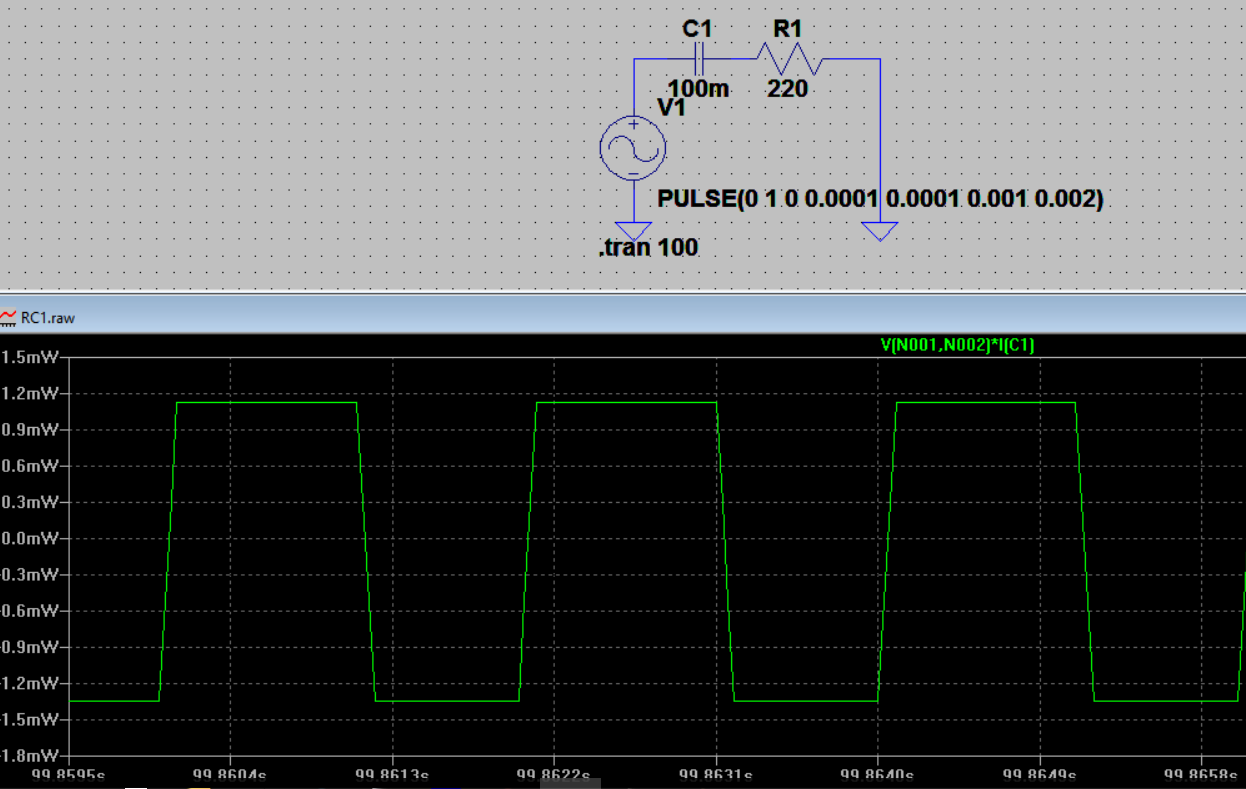 And here below the capacitor power in mW(blue line) and its integral(green line) for the first 500 sec:

As you see the integral goes to a constant which indicates the capacitor does not suck energy anymore from the circuit after certain amount of seconds.

What I think you're seeing is the start of an exponential where the capacitor is charging. The time constant is 22s and the pulse duration is very small compared with this, so you're only seeing the early stages of the exponential.

In charging a capacitor there is a flow of power in, but the resultant energy is stored and not dissipated.

I don't know why there is no discharge curve; it may be worth decreasing the pulse frequency significantly so that we can see what's happening in the time frame of the time constant. The integration sampling time may also be a factor.

Generator output may be splitted onto two components: DC 0.5 V and square wave with no DC. So, we see superposition of two processes: slow capacitor charging (to 0.5 V DC voltage) and fast oscillations. Hence, positive mean power (active power) corresponds to that charging. If at some time generator will stop at 0 V, we will see negative power consumption corresponding to capacitor discharge.

Not the answer you're looking for? Browse other questions tagged power capacitor inductor ltspice passive-networks or ask your own question.

0
Calculating the time for current reducing to zero from a charged inductor in a series LC circuit
1
A question about the argument part of impedance
10
What does the value of reactive power represent physically?
1
Average Inductor Voltage equals Zero?
0
Reactive vs Real Power in DC-DC Converters
10
The Intuition for RLC circuits
5
Is reactive power periodic in nature? What is the exact difference between active power, average power, and real power?
1
Difference between real and reactive power