I'm trying to find a circuit that can manually adjust the color of a RGB led strip with one potentiometer. Ideally it would be a dual potentiometer to control brightness as well as color. But not necessary. I understand I may need a microcontroller to do this, but I am too much of a novice to figure it out on my own. 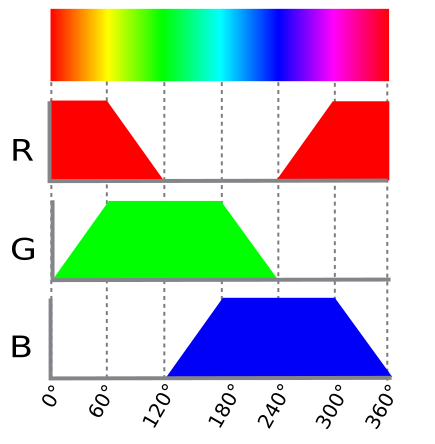 To do what you require you will need to crossfade between red, green and blue.

Note that you can't get white light with this setup as you would require all lights on.

This would be a little complex to do with an analog circuit but easy enough with a micro. Assuming the micro analog in read or encoder counting from 0 to 100 and the analog outputs put out 0 to 100 the code would look something similar to the pseudo-code below

Ideally it would be a dual potentiometer to control brightness as well as color.

If you mean a 2-gang potentiometer (both on the same shaft) then you have a problem. If the brightness changes from min to max as you rotate the pot then you will have lamps off at the zero end and fully on at the 100% end getting brighter as you sweep through the spectrum. In our example above you would never have bright yellow.

Figure 2. A simplified schematic diagram of a micro controller for this system.

Improve your question and we can add more details to the answer.

Using a rotary encoder rather than a potentiometer

There are two problems with the potentiometer approach:

A good solution would be to use a rotary encoder with push switch.

These work as a "quadrature encoder" giving out to pulse trains (as you rotate the knob) which are 90° out of phase. (90° = quarter of a turn, hence quadrature.)

The program logic is very simple.

The encoder has a third contact that makes when the button is pressed. With this you can now do much more sophisticated control. E.g., rotating knob un-pressed changes colour as discussed above. Rotating knob while pressed changes brightness.

Figure 5. Encoder version schematic. Note that the micro's internal pull-up resistors would have to be enabled and some debounce logic required in the code to prevent spurious counts due to contact bounce. 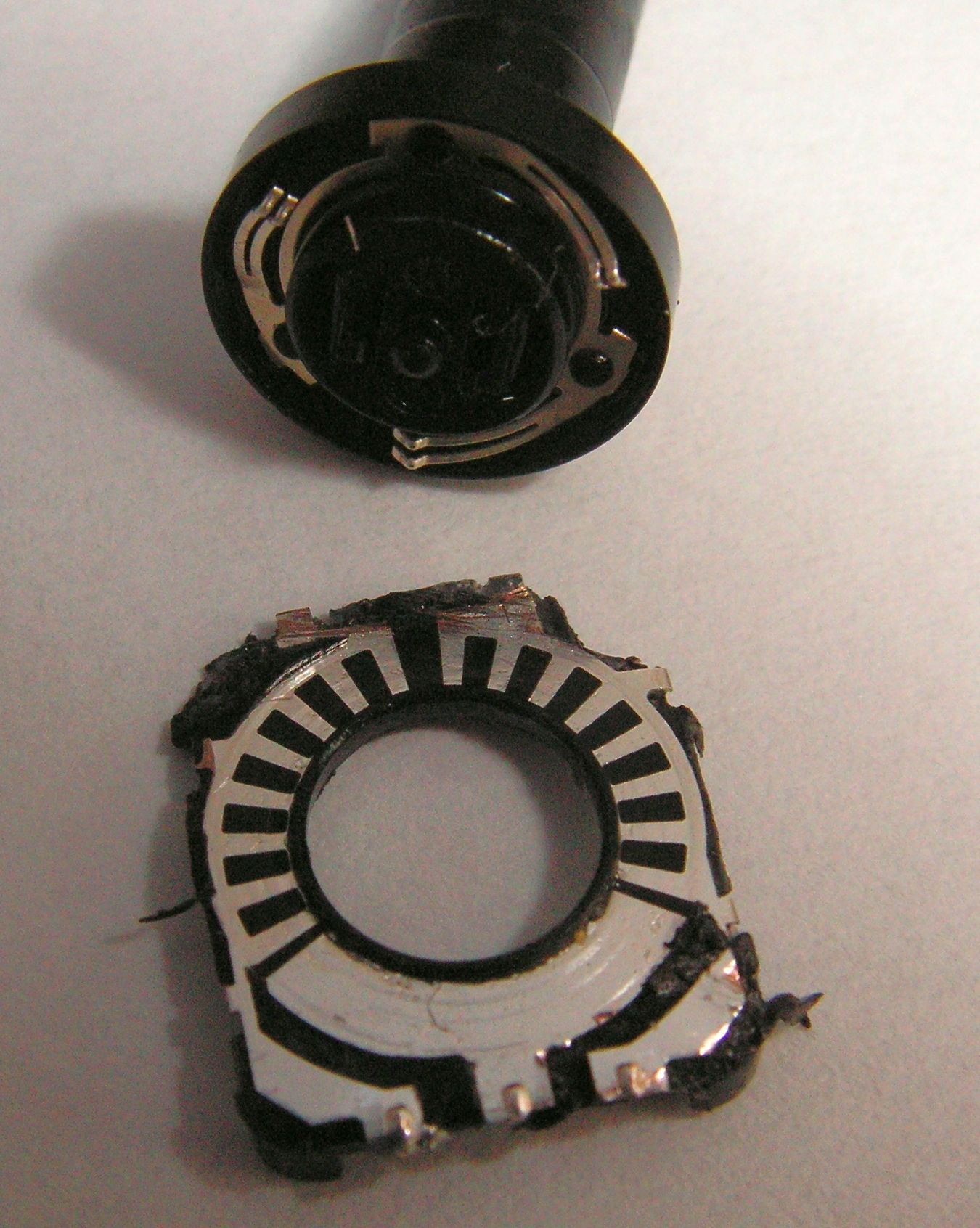 Figure 6. Innards of the rotary encoder portion of an encoder / pushbutton. Source: an interesting disassembly article on Efton.sk.

Note the clever arrangement of the contacts in Figure 6. The rotor has three connected contacts 120° apart. One is always in contact with the common strip at the bottom of the photo. The other two will contact the "teeth" on the 'A' and 'B' segments in quadrature. Note the slightly wider black gap in the 12 o'clock position which offsets the patterns by the required 1/4 of a step.

You don't need the plateaus particularly if you want an even brightness (100% red + 100% green will be bright compared to red and green separately). @IanBland. 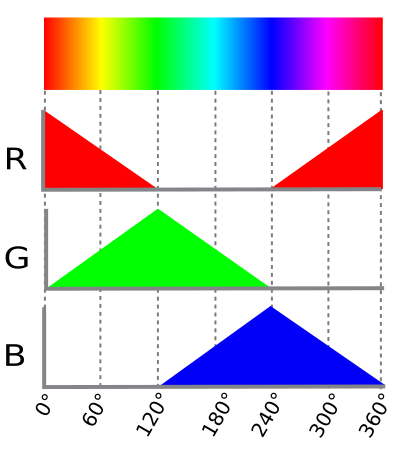 Figure 7. Alternative cross-fade strategy for even brightness. Code would have to be modified to suit.

While I agree in every sentence of transistor's answer, and consider it the best answer you could make (and I couldn't upvote it enough), the comment "I agree that analog takes more head scratching and I started to doodle but realised that it got complicated very quickly ..." sounded like a challenge.

So here we go. Requiring only a quad-opamp chip and some passives ! Runs from a 7-32V supply (well, I think - maybe a few resistors needs to be adjusted). All three leds are driven with a current that looks like the "Alternative cross-fade strategy for even brightness" curve above (love those diagrams, really).

Well, I wouldn't explain in details how it works (I just give a few hints at the end), because I mostly used the "make up some values, simulate, adjust, simulate, add a diode, simulate, drink a beer, simulate, start again from scratch..." strategy, and didn't write a single formula, so I can't justify everything that is here (and it can certainly be improved). Morover, I totally agree with what has been said: this is not the way it should be done; using a MCU gives a lot more flexibility, accuracy, efficiency, and will make a smaller design.

Here are the current curves (well, upside down), depending on the pot position (current has been set to 15mA per led, it can be adjusted by changing R5/R10/R24, but R5 and R10 must have the same value, or you'll need to change the ratio between R16/R17 as well):

A few hints on how it works, though.

Of course, for a whole led strip, the voltage will certainly need to be a lot higher, and power consumption will start to be a problem. But this circuit could be used to drive higher power current sources with better efficiency (unfortunately, OP did not give enough information to build this part - well, this question had been originally closed for a reason).

I earlier proposed a digital solution to this problem with some pseudo-code. It's elegant in that it only requires a pot and a micro with analog in and PWM out. @dim worked out an analog version which simulated for him but by his own admission he is doing some funky stuff with the diodes and it's a bit tricky to figure out what's going on. @IanBland's "A microcontroller is a thorougly boring way to do it" left me concerned for Ian's boredom.

Further analysis of the problem led me to conclude that if I was able to generate the modified pot curves shown in Figure 1b that I could sum them to generate the control curves of Figure 1c. 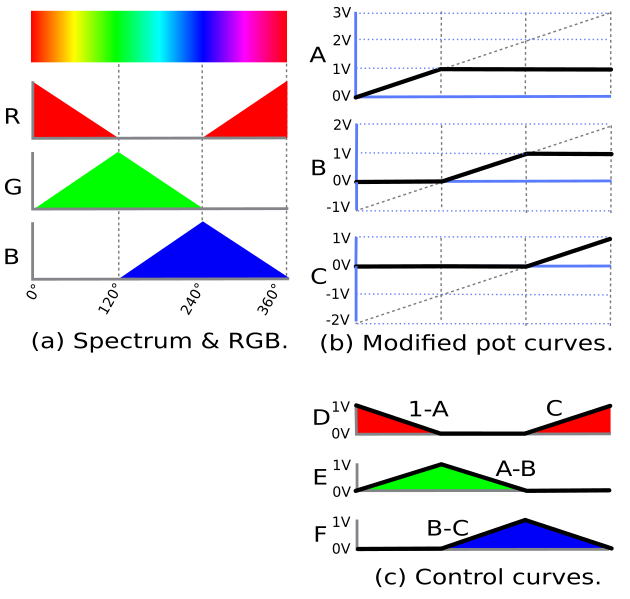 A web search for opamp min-max circuits led me to a fascinating AD8036 Voltage Feedback Clamp Amp from Analog Devices. This device, when used in non-inverting mode can clamp the input voltage between an upper and lower limit. 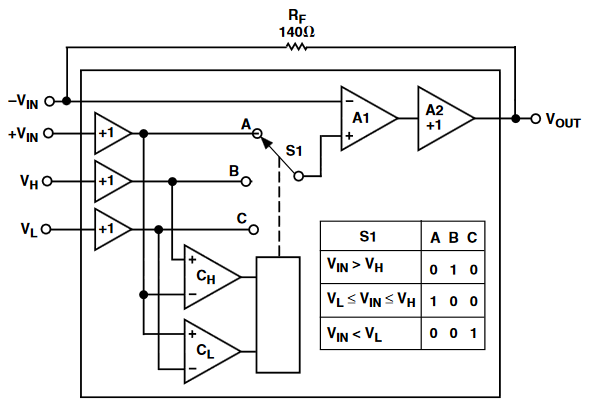 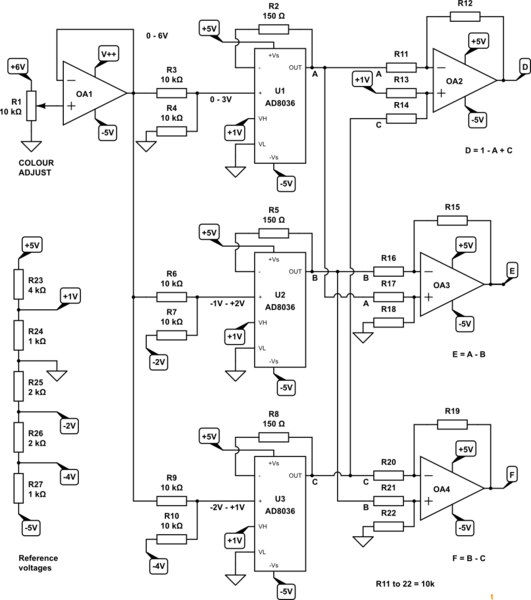 All that remains is to generate the PWM signals. The LTC6992-1 (which shows up in many of Andy Aka's posts) is ideal for this.

As can be seen, the configuration is simplicity itself. The choice of 0 to 1 V control in Figures 1 and 3 was determined by the MOD input of this chip. One chip is required for each of the red, green and blue channels.

R7 and R10 are loading the potential divider circuit which probably should be buffered for the -2 and -4 V.

I haven't built or tested this circuit. I only did the exercise for the design challenge and present it here as it may be of interest to others - in particular the clamp-amp chips.

We are having a fundamental disconnect when you say that you want to control TWO INDEPENDENT variables (color hue and brightness) "with one potentiometer." Does that mean that red will never show because it correlates with zero brightness? A clarification would go a long ways toward helping us understand the question.

Suggestions for dual-concentric pots (which are actually TWO pots and two knobs with concentric shafts may or may not meet your requirement for "one potentiometer." And suggestions for rotary shaft encoders (with a push function) could be use to shift the action of the pot between color hue and brightness.

Another possibility would be a joy-stick which has two axes (X and Y) that could be mapped to color and brightness.